Hope everyone had a Happy and Bloody Valentine’s Day. If you were in NYC this past weekend then you could have had a bloody good time at Blood Manor anti-Valentine’s day haunt. Scare Zone was in the city to check out this haunt favorite. 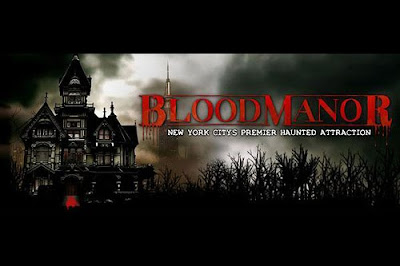 Blood Manor is located on the (far) Westside of the city and was a little hard to find as 27th street which it’s located on, doesn’t connect direct to avenues 9-7. That is a minor detail but better directions from the website would have been appreciated. Blood Manor is in a fairly nondescript building and sets the right feeling of foreboding for a city haunt. Upon entering the building guests have to climb up 5-6 (lost count) stories to get into the Manor. Not sure if they have disabled access but even for those in shape it was a workout! On the main floor guests walk down a dark corridor painted with images of monsters and ghouls lit with florescent lights. People walking out of the Manor seemed to be very pleased and some very scared which added to the anticipation for those of us in line. The wait was fairly short (no need to spend the extra $15 for a VIP pass). There also were a few scareactors trying to spook guests in line. 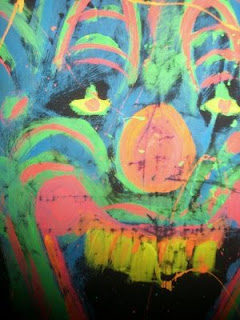 After a brief safety spiel (no touching monsters, no pictures, etc.) we pushed through the dark curtains and entered the Manor. The first scene was a very detailed foyer which made you forget you were in a city building. The scares started right away with a monster jumping at out from a hidden doorway. From there you went through various scenes of the house with some good scares and sets. Being Valentine’s Day there were cryptic message of ‘love gone bad’ painted in blood throughout the scenes. There was not a set story or theme but rather various scenes of horror, where even Michael Myers stalked a long dark hallway with a strobe light and Freddy was lurking in his boiler room. However, we wondered where was the miner from My Bloody Valentine or a Jason Takes Manhattan scene? 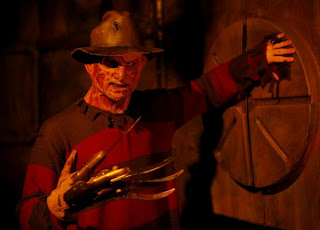 In other scenes aliens and 3D clowns ran amuck. A note on the 3D rooms, they give you ‘used’ paper glasses before you enter the 3D rooms and then take them back after. While this is eco-friendly and cost savers for the Manor, it isn’t really hygienic and at $30 a ticket they should let guests keep the glasses perhaps with a coupon printed on them to return in October (?). 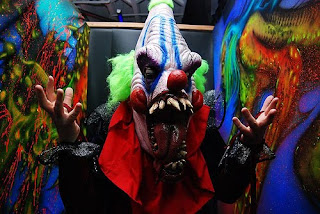 The Manor did have some kink horror which may not be suitable for children but it was marketed as an anti-Valentine’s Day event for adult singles. In one scene there was a bondage session taking place which wasn’t scary but very freaky as a helpless male victim locked in a cage in his very tighty whities, with back piercings, was being pulled in two separate directions by his female masters. There also was a scene with strippers and anatomically correct female mannequins. Freddy was also feeling frisky making some strong innuendos to both female and male visitors, but that’s always been his style. Another scene in a bathroom included a guy in his underwear being threatened by a Mrs… err Mr. Roper-looking drag queen who was wielding a plunger in only a towel and daring guests to take it off. None of it was offensive and all in fun. It actually felt somewhat right for the holiday… love goes bad sometimes, doesn’t it (?). 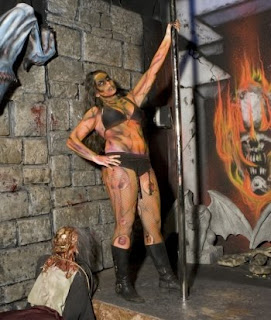 Overall, Blood Manor was a Valentine’s treat. It’s nice to get some haunt action throughout the year. The scareactors had full energy, were in the moment, and tried everything they could to keep you scared. The sets and props were very detailed also offered some scares of their own. The crowd got backed up making a lot of the scares less effective, but controlling New Yorkers can be a difficult task so we won’t hold that against them. The price was on the very high side (Regular: $28.50 adv – $30 on site, VIP: $42.50 adv – $45 onsite). The full value for the price didn’t feel recognized as the prices should be dropped by $10-$15, or even a discount offer for same-night return visits or for October visits would add some value. 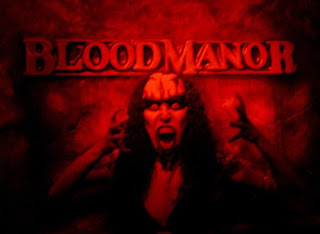