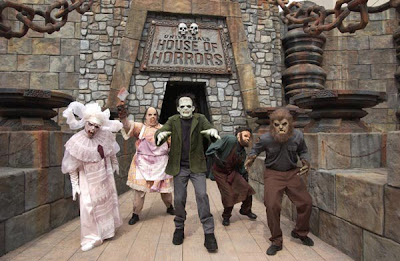 There have been some updates from our friend John Murdy, Creative Director of HHN at Universal Hollywood. He says that the last deal has been closed and now all the maze themes are locked in. No official announcements as to what we can expect will be made until June. He was asked if they will increase the number of mazes and his reply is that they have to go for quality over quantity as space they can use is limited.

In the meanwhile, Universal’s House of Horrors is undergoing some upgrades that will include sets with an added Horror icon, and a lot of audio/lighting enhancements for the scareactors. The upgrade is expected to be completed by Mid May.

This all is promising news and hopefully HHN Hollywood can add at least one additional maze to their 2010 slate. We expect that Saw and Halloween will return in some fashion but don’t expect for My Bloody Valentine to have a sequel. Of course, they may take a lead from Orlando and start with a completely new slate of terrors which also would be welcomed.