The shaker can, the bait and switch, the black-light dot room, the air cannon, the shifting floor, the drop panel: these scare tactics have been employed by haunts for years and no longer scare anyone who’s been to a fair share of haunts. Some theme parks rely on the same approach year after year, and you come to predict exactly where that monster is going to be and when the scare is going to come.

However, every once in a while, you might venture out of the theme park and into a home haunt or a smaller commercial haunt that has a truly innovative and unique concept for scaring. And sometimes theme parks get it right, too. We hope that as haunted attractions become more and more popular, they will be forced to become more innovative and original when thinking out their scares.

Here is a list of some of the noteworthy scare ideas over the past decade or so. Some of them didn’t work, some of them were brilliant, but we applaud the effort of them all. 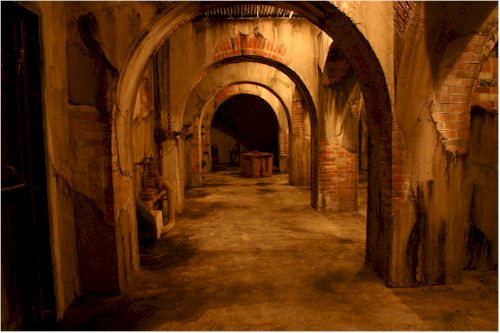 We haven’t actually been to this haunt, but the descriptions and reviews online make this sound awesome. There are crematory ovens and hearses to crawl through and maze of underground tunnels. PLUS, live bugs and rodents. Gross. And scary.

This maze was set up as an actual maze–you had to find the correct way out. It was little more than an empty warehouse with chain link fences, but the scareactors worked hard to separate you from your group, coming at you with chainsaws from every direction and actually encouraging to do what the name of the maze suggested (and what theme parks usually frown upon in their mazes)–RUN!

No hayride wagon, no plywood walls to keep in  you line…this attraction takes you outdoors into the dense woods of Pennsylvania, filled with monsters (i.e., werewolves).

Another innovative concept from HHN Orlando: this one turned out all the lights. I mean, completely turned them out, so it actually was Pitch Black. Unfortunately, instead of being scary, it was completely annoying: you ended up grabbing onto the person in front of you to find your way, which also means that some stranger was grabbing onto your shoulder as well. They had scareactors with flashlights jumping out of dark corners, just another annoyance. From this maze, it was easy to realize that the anticipation that’s built up when you can see “something” coming up ahead is very important in setting up a scare. Not being able to see anything at all? Just lame.

This was a remake of the “Saw” maze of the previous year, which we did not attend, but we heard that some of the scares were reused from Saw. Each room had an interactive task for the guests to complete before the door would open to the next room. Never have instructions such as “push this button” been so terrifying! Because you KNEW that as soon as you pushed that button, something bad was going to happen. This maze had some of the best and most fun scares I’ve ever had in a maze.  A brilliant way to build up suspense, and without the need for elaborate sets or props.

Ok, so this this maze hasn’t even opened yet, but we’re excited by the very concept. If you’re the type who says “you go first” before entering any maze, you probably won’t like this one. You’ll be forced to go first, and with no one to hide behind, there’s no way to escape. We can’t wait to hear reviews of this one.