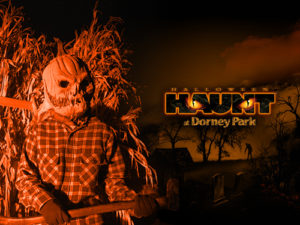 Since joining the Cedar Fair family in 1997, the curse of Knott’s Halloween Haunt has spread across to the other parks in the company chain . Tonight we continue our special Scare Zone report “Cedar Scares,” with a look at Dorney Park located in one of the U.S. Haunt capitals, Pennsylvania.

Dorney Parkis one of the most popular amusement parks on the East Coast centrally located between NYC and Philadelphia in Allentown, PA. . The park features six roller coasters, other adult and children’s rides, and Wildwater Kingdom waterpark. The park itself is said to be haunted which adds to the intrigue of this haunt. It is said that there is a ghost that haunts a part of the park near, what is called the Dominator. This is an old building that houses an arcade, a few small shops and eateries. Connecting two of the eateries is a corridor that leads to an old mine shaft. There have been reports of a man seen by the door that appears and disappears just as quickly. There have also been reports of strange noises and occurrences throughout the building.

Dorney’s 2010 haunt will feature a few mazes that can also be found at other Cedar Point haunts including; Club Blood, The Asylum, and Cornstalkers. Dorney’s haunt actually features an impressive 11 mazes listed under the categories of outdoor and indoor mazes. It seems that some of the outdoor mazes are actually scare zones but a few seem to be interesting as stand alone haunt concepts. We’ll give you a run down of their “unique” outdoor and indoor mazes along with our impressions.

Backwoods: Wilderness survival is essential at Camp Cudie.cThis reminds us of Camp Gonnagetcha, which is the log ride haunt that was at Knott’s and California’s Great America park in prior years. This theme is always scary for those of us who grew up with Friday the 13th.

Terror Square: Souless outlaws wanted Alive or Dead!Western themes aren’t used as frequently at haunts but tend to be very effective. Of course Knott’s defines this theme with their ongoing Ghost Town scare zone. There’s nothing creepier than walking through a dark and foggy Ghost Town.

The Gauntlet:   The condemned criminals and slaves move to battle those who decide to enter.This also was a scare zone at Knott’s in years past. This theme takes on the medieval era and allows for some interesting monsters and ScareActors.

Pirate Passage: Curious Captain Brown, a scourge of the seven seas dares you to pass. His crew is three sheets to the wind so don’t be caught or you may become shark bait!This is obviously a scare zone and uses another popular haunt theme, killer pirates. Once again, Knott’s covered this theme a few years ago with Red Beard’s Revenge. This maze actually was effective so a Scare Zone with Pirates has the potential to shiver some timbers as well.

Headstone Hollow: These zombies have risen in search for food, trespassers beware, they’re hungry for you! While the zombie theme has been done so many ways and times it’s actually nice to see a zombie maze that takes it’s lead from the original Night of the Living Dead instead of the radiated, toxic infused, post-apocalyptic zombie movies of the past 10 years.  The effectiveness will be contingent on how well the ScareActors pull of their rolls as the menacing undead hungry for our flesh.

Death Trap:Enter this sick world of twisted games as our mastermind’s confessions unfold.This outdoor maze is their version of Saw. The death trap concept isn’t the most terrifying one, but they can have fun with this if haunt victims are “forced” to engage in the games.

Psycho Circus 3D: The circus is in town for one night only and our crazy clowns plan on delivering a killer performance.Clowns… Yikes! Over the years there have been many variations of the killer clown theme. Some go for for scary and others go more for the laughs.When this theme is accented with 3D the clowns can appear closer and scarier than they really are.

Mansion House Hotel: Once a luxurious stop for travelers of quiet distinction now a popular stay for those who appreciate the charm of the unusual. Our question, is it a mansion or a house? This Dorney Park original has the potential to be very scary with a mansion/house that’s full of unexpected surprises. They say curiosity killed the cat so keep your loved ones and nearby strangers close as you investigate this maze. Our thoughts that this is the most elaborate of the four indoor mazes. In fact, they posted some blueprint photos on their facebook page and the layout looks enormous!

We look forward to hearing the reports and reviews from haunt stalkers who dare to enter Dorney’s Haunt. All in all, this one sounds like it’s worth a trip to PA to check out and it proudly continues Knott’s haunt tradition.