Tonight we continue our special Scare Zone report “Cedar Scares,” with a look at Scarowinds haunt located at the Carowinds park in Charlotte, North Carolina.

Joining the other Cedar Fair parks, Scarowinds transforms into a haunted playground during the month of October. This was the opening weekend, and the park is marketing 2010 as “Scarowinds X,” claiming that this is their “10th year of fear,” which is not quite accurate as last year was marketed as the “10th season of screams.” Given the fact they started haunt in 2000, this really is the 11th season. Nonetheless, this should be another good year for Scarowinds.

This year’s haunt features 8 mazes and 3 scare zones. Once again, Cornstalkers and the Asylum find their way into the line-up of mazes. In addition, there is Laff 3D, which is yet another deranged clown–themed maze. There also is Camp Killauee, which is similar to Dorney Park’s Backwoods maze,which loosely references Friday the 13th. They also have the Slaughterhouse, which is a long-running maze at Knott’s Scary Farm, taking its victims though a human meat factory.

There are three original mazes to Scarowinds that haunt stalkers can find this year.

Defex: This is a new maze for 2010 and is simply described as a “disassembly line” for defective toys. This sounds slightly familiar to Knott’s Doll Factory.

Silver Scream Sinema: A “sinematic” tour of some of the creepiest horror films ever made. Perhaps you’ll become an extra in a nightmare where our director makes the final CUT.

Dead Inn: Bed bugs are the least of your worries as you desperately try to check out from our quaint little inn, in one piece. Our over-attentive staff would kill to ensure you get a good night’s sleep!

The scare zone line up  for 2010 includes 3 terrifying areas that will make the journey through out the park more forebording.

Feeding Frenzy: Our blood-thirsty horde of hardcore vampires goes straight for the throat in this gritty, high-impact scare zone.

The Cemetery: Death is nothing compared to what the unsettled spirits of our not-so-dearly departed have in store as they await you in the mist on the grounds of the Cemetery.

The Playground:Swing by to let our twisted tikes show you that “it’s all fun and games until someone gets hurt.”

This haunt sounds like it’s another winner from the Cedar Scare haunt collection, and we look forward to hearing the reports and reviews from haunt stalkers who visit Scarowinds this year. Here is a special report from WCNC of what we can expect to see at this year’s Scarowind “X”. In addition, here is a clip courtesy of our friends at Screamscape. 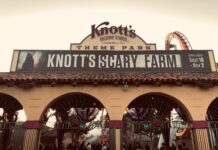