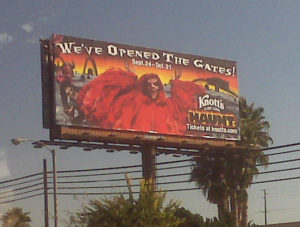 After having a day to recover (physically and emotionally) from the disastrous opening night at Universal, we dusted ourselves off and headed down to the Scary Farm. This evening couldn’t of been any more different than the one we had at HHN as the park was practically empty! We arrived a little after 6:30, bought our discount tickets, got quickly wanded by security, and within 5 minutes we were inside the gates of doom.

Anyhow, once inside the park we enjoyed an evening with no crowds, energetic monsters, and familiar scares. We did not wait in a single line all night, except for about a 5-minute wait for our second time through Sleepy Hollow Mountain. Also, the monsters should definitely be commended for doing a great job on a day that saw temperatures in the 100s. Even the monsters in full, furry bunny suits were giving it their all!

Knott’s the grandaddy of theme park haunt events which serves as  an advantage and also as a disadvantage. The advantage is, they have 13 mazes with a wide array of themes, so there’s bound to be something that’ll scare the skeletons out of you. This advantage is also a disadvantage as the number of mazes almost makes it feels as if they are stretched too thin where only a few mazes get the full budget sets and scares while others are just recycled memories from the Haunt scrapyard. Therefore, the experience through Knott’s mazes isn’t always consistent (even in the same maze) nor scary. The other problem is Knott’s has failed to come up with new types of scares. They still rely on the monster in the corner or behind the curtain as the main scare tactic. It’s 2010, and we expect more, how about some surprises from the floor or the Howl-O-Scream style “boo doors” where monsters pop out of seemingly solid walls? Besides these shortcomings Knott’s still offers a fun and fulfilling event that is worth going back to year after year, even if it’s just to be in the Halloween Spirit. So without further ado here is the rundown of the good, the bad, and the Knott-so-scary. 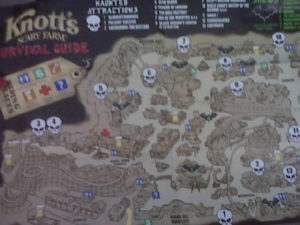 The Necropolis.This scare zone featured Victorian Steampunk vampires haunting a city of the dead. This was one of  our most anticipated additions for 2010. As promised, the costumes and monsters were very interesting to look at, but as a scare zone there were few set pieces and it was difficult to tell where the zone started and ended. The monsters also paraded around as a group so it was more about atmosphere than scares here. The most impressive costume was the lady with the metal mouth and the wheel-arm guy. Overall, the effectiveness of the zone didn’t reach expectations. We hope they improve on what they’ve started this year. 2 Skulls *

Sleepy Hollow Mountain, featuring the headless horseman legend with ghosts, ghouls, witches and goblins. While we’re happy to say good riddens to Pyromaniax, Sleepy Hollow Mountain was only a little better. The potential was far better than the actual ride. The problem here was the lack of monsters on the ride. We counted only 3 the first time we went on it and 4 the 2nd ride. This is a 4.5 minute long ride therefore it averages less than a scare a minute which isn’t good. With this ride you can see that they were banking on the set pieces and atmosphere to sustain the ride but at the end of the night the effect of a good haunt is loss without the presence of monsters terrorizing us through out the ride. 2.5 Skulls*

Virus Z, replicates a small town overrun by infected cannibals, zombies and blood-thirsty corpses. This maze was one of the highlights of the night. It had a very impressive set and high energy monsters. The first scene in the diner, is cleverly built with an open design, allowing people inside to get scared while building apprehension to those who are walking up. The vending machine zombie was the best scare of the night! The maze does recycle some past mazes such as the movie theatre room from Horrowood Hotel, and the zombie laden gym from Hatchet High but they are sparingly woven into the new theme so it doesn’t feel like a recycled maze. The maze does have many open areas so it is harder to get scared but the monsters in here are relentless so they attack even if you see them coming.  4 Skulls *

Fallout Shelter, where the insane residents haven’t seen the sun since the Atomic Age. This maze replaced the tired and predictable Alien Annihilation 3-D laser-tag maze with a new and predictable alien 3-D maze. There were some cool sets and it was very claustrophobic in sections which added the experience. The  problem with Fallout Shelter is that the maze is very long so the gap between scares is big. It would of been better to make it a little shorter, and have the scares come faster. In addition, they said it was a 3-D maze, but upon entering we were told we won’t need the glasses until the end.  At the end no one told us when to put on the glasses and it was hard to tell if there was anything that was supposed to be in 3-D.  2.5 Skulls *

PART 2 of our trip report, with reviews and ratings on the returning mazes and scare zones, continues HERE 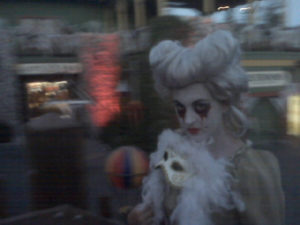