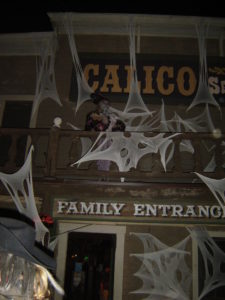 Dia De Los Muertos: The screams of La Llorona echo around you and the creatures of the night crawl from their crypts. This maze is known more for its design and effects as opposed to scares. This is a very visually stimulating maze, with a lot of black light and bright colors. The 3D isn’t fully effective, so it doesn’t quite make or break this maze.  The monsters tried their best to scare us, but again, they’re using the usual “around the corner” tactics. I think we can tolerate this maze for only one more season, with a few changes. 2.5 Skulls*

Uncle Bobo’s Big Top of the Bizarre in 3D: It’s the greatest slaughter on earth with clown carnage galore! This maze is supposed to be full of “humorous horrors,” but its theme has run its course, and the humor and horror are slim to none. The clowns seem to get lazier year after year and also look tired of it all. Knott’s should retire the clowns, as even with different names (Carnival of Carnivorous Clowns, Killer Clown Kollege), the clown maze has more or less been the same for over the past 10 years. 1.5 Skulls*

The Labyrinth: A journey through a forgotten forest and into the dark catacombs that lie beneath a ruined castle. This maze originated as Beowulf Labyrinth Into Darkness in 2007 and served as a movie promo. The following year they dropped the Beowulf name, and three years later we are still wandering through this maze wondering what the storyline is. The first half of this maze is outdoors and is very close to the Montezuma’s Revenge roller coaster, so this section of the maze is compromised by the noise and track lights. The indoor section gets better and offers some fun scares, yet this maze has only about 4 different types of costumes that all the monsters wear, so there isn’t much variety in their looks scene after scene. The monsters also seem to be more focused on being sexy or mysterious as opposed to scary. Again, the old tactic of having monsters stand in a room full of mannequins is used in this maze, and if you just look down at their feet you can tell whether it’s a real person or not. The rock monster at the end is still a very cool prop and does a good job at distracting us before a final scare pops out!   2.5 Skulls*

Black Widow’s Cavern: An abandoned mine overrun by a horrific pack of deadly arachnids. The classic Calico mine train used to be one of the most nerve-wracking rides at haunt, with the inward-facing seats forcing guests to sit with their backs to the wall. However, with the spider theme that started back in 2001 with the Curse of the Spider maze, it’s time to douse this haunted attraction with some bug spray. Even the animatronic spiders looked tired of it! How about using  The Descent as a theme for this ride; now that would be something scary. 2.5 Skulls*

Cornstalkers: Plunge into rows and rows of rotting corn and try to evade the blood thirsty monstrosities seeking to impale you on their razor sharp scythes. This is the most improved maze of the year. When it premiered 2 years ago, it was one of the scariest and most interesting maze concepts. In its 2009 sophomore year, the maze fell way short of its prior glory and was somewhat of a let down. However, they have tweaked some of the issues and made a darker maze with narrow walkways, providing a suspenseful and fun journey through the cornfield. The scarecrow masks and costuming could be more elaborate, as they simply use the Batman Scarecrow villan masks. We also couldn’t find any reference to the Wizard of Oz like they had opening year, but they still use it in the map’s maze description. 3.5 Skulls*

Terror of London: Step back in time and into the fog-filled streets of London where a host of infamous characters are on the prowl terrorizing city dwellers. This maze has the best sets and a couple of unique scares. The monsters also do a good acting job, with some convincing British accents. It’s a little disturbing to see some of Jack the Ripper’s infamous rape and murder scenes now being used for our modern day entertainment; nonetheless, they offer some of the maze’s scariest moments. This maze also has one of the most bizarre finales with Dr. Frankenstein’s laboratory–we thought he was German(?).  3.5 Skulls*

Slaughterhouse: Farmer Willy will think you are prime beef as he sets out to auction you off to the highest bidder, tenderize you with his chainsaw, and grind you into a tasty meat treat. This maze has has some of the most aggressive monsters and features some very gory set pieces. One of the highlights was the nod to 80’s classic Hotel Hell with the human garden. The scare factor seems to have increased in this year’s incarnation, but the quality of the props is on the lower end of the scale compared with the other mazes. 2.5 Skulls*

The Doll Factory: A twisted museum of death and disfigurement as you are pursued by the Marionette Murderer, a psychotic killer who turns his beautiful victims into life-size porcelain dolls. The concept of this maze is unique and could be interesting, but aside from a few elaborate scenes, most of the maze is just a walk through a dark hallways. This is another long maze where the scares are infrequent.  *2 Skulls

Asylum: Lockdown & Club Blood: These remaining 2 mazes need to be dead and buried. They are barely worth the extra energy and time they require to walk to the backside of the park they’re located in. These mazes suffer from generic themes and low-grade sets.

When the original Asylum premired back in 2003, it was the scariest maze of the year; however, 7 years later, a revised storyline, and the new location have all but ruined the one-time classic. This was also the maze where we saw one monster accidentally scare another (WTF?). This was hilarious to see but a bad show for the monsters.

Club Blood also has had a few infusions of “new blood” over the years, but now the scare supply has run dry. This maze has too much lighting and loud music, which makes it more annoying than scary. It also doesn’t help that the sexy vamps are anything but; one of them looked like a Snookie vampire. This maze was also full of overzealous security guards, as if we were in a real club and a fight was about the break out.

Knott’s better scrap both of these mazes and either extend its investment in the 11 other mazes or create 2 more with unique themes, higher caliber talent, and the new scare tactics that we’ve been dying for. There’s a 2011 opportunity waiting on this side of the park. 1.5 Skull

Ghost Town: This is a Knott’s classic, and walking through the fog-filled streets doesn’t stop being a nerve-wracking  good time! 4 Skulls*

Per our own Terror Tips, we don’t spend much time watching any of the shows at haunt, as we would rather go through the mazes. We did catch a portion of the Blood Drums show, which was a high-energy drumming show a la Stomp with the performers in some Steampunk’ish ghoul costumes. We also caught a quick glimpse of The Hanging, which was using the same gags as always—a celebrity walks on stage, makes a pun about their persona, and then gets punched, slapped, thrown, and killed on stage.

While it may sound like we didn’t enjoy our night at the Scary Farm, that couldn’t be further from the truth. Crowd-wise, it was much better than Universal, and as far as overall value, you can’t beat Knott’s. The problem lies in the fact that for repeat visitors (this was our 18th year), there aren’t enough new offerings year after year. Today’s haunt audience is more sophisticated, and Knott’s hasn’t fully invested in refreshing its haunt to bring its scares up to today’s tastes; the haunt of 2010 doesn’t look very different from 2000. In addition, with Universal’s HHN growing year after year and offering more modern terrors, we want to see Knott’s step up its game to remain competitive. We’d hate to see the “granddaddy” of haunts fade away. We don’t take Knott’s Scary Farm for granted, and they shouldn’t take us for granted, either.  We look forward to better and more scares in 2011.