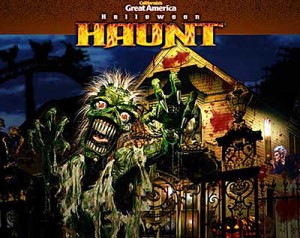 This year’s 6 mazes includes the 3 of Cedar Fair’s favorite haunt themes;  Cornstalkers, Club Blood (why does every Cedar Scare park have to have this lame maze?), and Slaughterhouse.

There are also 3 mazes, unique to this park, that haunt stalkers can find this year.

Toy Factory: Once a place where dreams were made, this toy factory is now a place where nightmares come true!  The maniacal factory workers are manufacturing a variety of disturbing new toys and novelty items for their demented amusement, using any part available, including human parts.  Buyers beware as your favorite toys have now been turned against you, or you’ve been turned into one of them. This maze sounds slightly familiar to Knott’s Doll Factory or the Dfex maze at Scarowinds.

Werewolf Canyon: Be careful as you venture deep into the murky woods through a hunter’s trail where the hunters have become the hunted and a pack of blood-thirsty werewolves havetaken revenge on those who dare invade their domain. With only the full moon’s light to help you navigate through…can you make it out alive? This sounds like it can be a very good maze as the werewolf theme isn’t used frequently at haunts, but it has offered some great chills in years past at Knott’s with haunts like Red Moon Massacre.

Carnevil: Hurry! Hurry! Step right up and don’t be shy! The most gruesome carnival is back in town. Get ready to face your worst childhood fears as demonic clowns and other freaks of nature terrify guests at every corner where they have turned the tables to make you the attraction! The good ole’ clown concept…. nuff said.

In addition to the mazes, Great America takes another lead from Knott’s by converting their log ride into a haunted attraction. This year they are borrowing the Black Widow’s Cavern theme. The ride is described as: “Dare to enter the old, abandoned loggers run, now overrun by deadly spiders.  Get caught in the web of the horrific arachnids as you travel the trough of terror on the old logger’s path of doom.” The one problem with this ride is that unlike Knott’s Timber Mountain log ride, there is no mountain therefore, very few areas for them to stage any real scares.

This haunt also ups the scares with an impressive 4 Scare Zones, with 2 of them being fairly orginal themes to this park. The line up includes:

The Gauntlet:  Deep within the fog, these tortured, scarred souls are out in full force and ready to unleash their fury on anyone who dares to run The Gauntlet!

Dead Man’s Cove: Ahoy mateys! The captain and his cold-blooded crew are in search of their missing treasure, only this treasure isn’t your ordinary booty, it’s your soul!

Underworld Alley:As night falls upon this forsaken graveyard, the deceased awaken from their graves looking to wreak havoc on those brave enough to enter their terror-tory.

Witch Doctor’s Trail: Watch your back! These crazed zombies are under the witch doctor’s spell and out to bring back as many souls as possible to their master.

Overall, this haunt sounds like it’s going to be a great time for Haunt Stalkers in CA’s Bay Area, and we look forward to hearing the reports and reviews from those who visit this year.