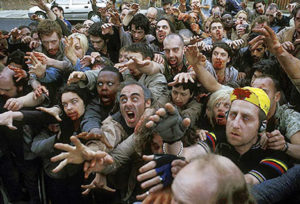 Reports state that once again Hollywood’s HHN was packed over the weekend, with both Friday and Saturday nights selling out. Not only are they sold out, but it also feels as if they’ve sold out their haunt fans, as this year’s haunt seems to have really missed the mark by exchanging a once-great haunt experience for a quest of higher profits. It appears that Universal’s goal for 2010 is to squeeze as much money (and life) as it can out of its visitors, without caring if they have a satisfactory experience or not. In fact, on their Facebook page, Universal even boasted about being “Sold Out” as if it’s a good thing. However, what it really means is long lines, crowded walkways, and fewer scares. Many fans agree and have posted their disdain on Facebook about the overcrowded experience at this year’s haunt.

One obvious problem is that Universal has been open only two nights of the weekend. What’s up with that? They won’t add Thursday or Sunday nights to the schedule until later in the month. With haunt season in full swing and the three-day Columbus Day holiday weekend coming up, it would’ve been smart to at least be open this coming Sunday (October 10) as all other So Cal haunts, large and small, are.

It also doesn’t help that Universal has fewer than half the number of the mazes as Knott’s but similar-sized crowds, so everyone is packed into the five mazes (and Terror Tram). The only way to enjoy Universal’s haunt is to pay a surcharge for the Front of the Line Pass (FOLP). So essentially, if you want to enjoy it all, you have to pay! Perhaps if Universal Hollywood followed the procedures of Orlando and allowed only one trip through the maze with the FOLP, that would help, as the FOLP is a contributor to backing up the lines.

While we know that John Murdy and the creative team are very passionate about and good at producing innovative mazes with fully immersed environments, these efforts are long lost after one has to endure an evening battling the crowds. Perhaps they should raise ticket prices slightly and have a lower threshold for admittance and also add Sundays to their schedule to mirror their competition. In addition, they can pull back on the discount offers, which seem overly generous this year.

So if you’re planning to go/return next weekend, plan to arrived early (can’t stress this enough) and cough up the money (maybe with a lung) for a FOLP or be prepared to wait in some excruciating long lines, which is really what “Fear Fears Most”.

In case you don’t want to wait in line, here’s a video of a partial walk through of this year’s Friday the 13th: Kill, Jason, Kill maze.