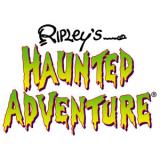 Ripley’s Haunted Adventure is located in Downtown San Antonio, directly across the street from the Alamo. It’s one of 3 attractions offered in the Alamo Plaza! Ripley’s Haunted Adventure is a multi-million dollar haunted house themed as a tour of the old Grimsby & Streaper Casket Company. The story goes that the casket company was run by the two men who mysteriously vanished. The disappearance of the two men, as well as many townspeople, combined with odd happenings in town, was blamed on the fact that the casket company was built over a cave called The Sink, where many entered but never left. Ripley Entertainment acquired the property and has been giving tours of the mysterious building to those brave enough to enter!

This year round haunt has a great location with a large layout, interesting effects and very intricate sets. It starts at the street level with a warehouse filled with old crates filled with coffins with shipping labels for the morgue. You board the “Coffin Lift” which is a caged elevator car that travels up 3 stories on an inclined track into a dark tunnel. At the top it stops in the pitch dark and you hear voices which are abruptly interrupted by a startling door slam. On the other side of the door the “ghost host” greets you. He takes you into foyer of the morgue, which looks something like Disney’s Haunted Mansion, where he proceeds to tell the story of the morgue and how the owners not only collected bodies but spirits as well. After the set up of the story you’re then sent into a dark hallway where the maze and terrors begin. 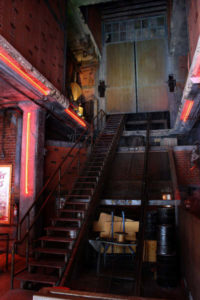 Inside they have a lot of animatronics and scare effects (steam, air blast, flashing lights, loud noises). There’s also a few scareactors lurking about. We were there on a weekday afternoon and I only counted 3 different scareactors who rotated throughout the scenes in the maze. Nonetheless, they were pretty effective in consistently scaring us. While this maze begins with a story and the morgue setting, after you start the journey you get the mix match of various themes and typical sets ranging from a slaughterhouse, and a spinning vortex tunnel, and a clown room, and rampaging zombies.

The use a lot of the “boo doors” like they have in many of Busch Gardens Howl-O-Scream mazes.  These are some of the most effective scare tactics used as you don’t know when to expect them. They also have some sections where it is pitch dark and you have to feel your way forward. These were the most nerve racking and suspenseful moments of the house, accented by surround sound speakers playing whispering voices. At the end, once you think that you’ve made your way out, they have one final scare which will be forever memorable! 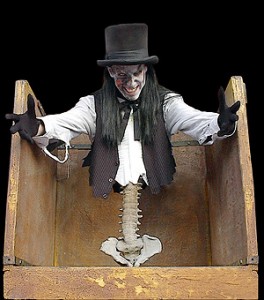 If you live in or visit San Antonio, this should be on your list of things to see. The best part is it offers year round terrors! They also have other locations in Gatlinburg, TN and Myrtle Beach, SC.