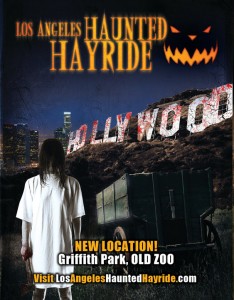 Upon exiting the 5 freeway and turning into Griffith Park, the tall tress in the darkness quickly shadowed our car, setting the perfect stage for the evening’s haunt. We followed the signs for 2 miles, where the street dead ends at the entrance of the Los Angeles Haunted Hayride carnival. With the road being so dark, we, along with everyone else, bypassed the parking lot, which wasn’t well lit and didn’t have any signage. After parking, we walked through the very dark path (no exaggeration) towards the carnival lights.

Arriving at the L.A. Haunted Hayride, you get an immediate sense of Halloween fun and celebration. It’s not so much scary as festive. The staff is very friendly and helpful, and the crowd seemed to be more mature (but we don’t mean old) than the ones we’ve found at other haunt events. We bought the very pricey $35 “all-attractions pass,” which includes the Hayride, ‘Hey! Maze’, and Carnival.

The first stop was the Hayride, which is the main attraction. The line goes through a clearing in the park, and while the crowds were small on opening night, you can tell from the queue they’ve set up that they expect there to be some big crowds in the weekends to come. The line has upright coffins along the path, which are really cases for TVs showing horror movies. This is a great concept to help the wait go by faster and keep you in the mood.  Towards the end of the line, you can see the tractors loading up the victims and driving into the fog-filled entrance, which slightly resembles the entrance to Jurrasic Park. There’s also three animatronic heads (a la The Haunted Mansion’s singing ghosts statues) impaled on sticks who sing a couple of Halloween tunes and provide the warnings for the hayride. Without spoiling the whole experience, we will say that this is a very unique and creepy haunt experience in Southern California. The setting dramatically adds to the scare factor, and all of the monsters give 110%. This attraction has some of the best actors we’ve seen this haunt season, who are able to effectively scare a group of 40 people at once and then go in for some individualized terror. We noted that this is the first time we’ve been gently touched and in some cases petted by the monsters, but it wasn’t in a violating or offensive sense and did accent the scares. This attraction also features some of the tallest and biggest monsters we’ve ever seen at a haunt! There were two monsters who were 10 feet tall that made sudden appearances from behind the wagon, offering some of the night’s best scares.

There isn’t one coherent theme or story  to the ride; instead, it simply takes you through various scenes of horrors, ranging from a burning church filled with zombies, stalking demons, Jason Voorhees in a cornfield, a mad doctor and his escaped patients, ghostly children with the “Ice Scream” man, a cannibalistic family, vampires, and of course the obligatory killer clowns. We will say that on this ride, the clowns were pretty effective in terrorizing us.

If there are any improvements they could make, we’d suggest that they add more soundtracks and sound effects along the route so the sections between scenes don’t feel like a void. They also can increase the fog and improve some of the lighting on the sets, as it was hard to see the very detailed makeup on some of the monsters due to the darkness of their costumes and the surrounding set. For example, in one scene, no one noticed a monster who was standing on top of a hill until we pointed him out. While this year they make good use of the Old L.A. Zoo settings, overall there are many open spaces, so it was easier to see the scares that were coming. We found last year’s location in Calabasas to offer a slightly better setting with more trees next to the road, which added to the anticipation of monsters jumping out. Another thing: after going through it, we found the price to be rather steep and feel that $15 would be a more reasonable price for this experience (Hayride-only tickets cost $25).

This is just a labyrinth through stacked bales of hay. They have only two monsters lurking about and a couple of little girls with jump ropes singing the Freddy song. It’s dark towards the backside of the maze, which did add to the fun of finding our way out, but overall, just save your $10. They include admission to the Carnival with the purchase of the  Hayride ticket. It’s really just a bunch of vendors and local restaurants selling food, products, and games along with a couple of shoddy carnival rides. We can’t believe they actually think that this is something people would think is a value-added experience to the ticket price. If anything, it’s only valuable for the Hayride to have people go in this area and spend money on food and some of the rides… if they dare. Nonetheless, the carnival provides a little area to hang out so you can make the night more of an event.