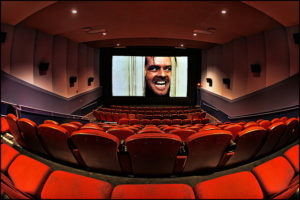 We’re 18 days from Halloween, and horror movies can now be found everywhere, from theatres, DVD/Blu-Ray, and TV. This week, there are no major horror movie titles coming to theatres, but never fear as we still have the goods on the frightening film offerings for the coming week.

HiSss: Bollywood gets bloody in this limited release international thriller. The film follows a ruthless American, fascinated by the ancient folklore of the mythical creature, who travels to the jungles of India to discover the truth. He finds and captures the nagin’s mate for the magical powers of its nagmani, a mythical gem embedded in its hood. The nagin then transforms into a gorgeous femme fatale and follows him back into the modern world to track down her lover and wreak revenge on his captors and all who stand in the way of their reunion. Huh? The trailer looks slightly better than it sounds, and this movie is written and directed by David Lynch’s daughter, Jennifer Lynch. It also looks like it would be a good setting and theme for a haunt.

Night of the Demons: This a remake of the 1988 movie. Angela Feld is throwing the Halloween party to end all Halloween parties at the infamous Broussard Mansion in New Orleans, where dark events transpired almost a century ago. But when the packed party gets busted by the police, Angela and her friends Maddie, Lily, Suzanne, Colin, Dex and Jason are the only ones left behind. Soon Colin and Angela make a grisly discovery in the basement and inexplicable events start to take place. With the mansion gates mysteriously locked, the seven find themselves trapped for the night…and soon they’re fighting ancient demons for their very souls. 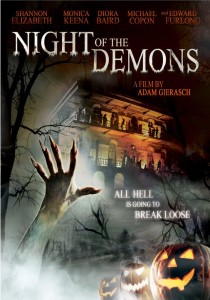 Mirrors 2: The obvious sequel to the 2008 Alexandre Aja film, which starred Kiefer Sutherland. For the 2 people who saw that movie, this sequel’s for you. After losing his fiancee in a car crash, for which he blames himself, suicidal Max Matheson (Nick Stahl) reluctantly takes a job as a night watchman at his father’s Mayflower Department Store. When his co-workers are killed off in gruesome and horrible ways and Max begins to see a mysterious young woman in all the store’s mirrors, desperate to communicate with him, he fears he’s losing his mind, or that he may be the next victim.

Giallo: This straight-to-DVD flick stars Adrien Brody. He replaced Ray Liotta, who was originally attached to this movie; time will tell who made the best career move. An American Stewardess and an Italian Detective team up in a race against time to find her sister who has been abducted by a maniacal serial killer known only as “YELLOW,” who has been disfiguring and murdering beautiful women on the streets of Milan. 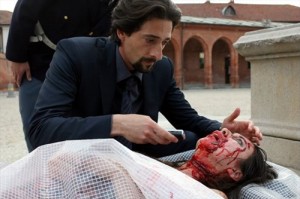 The Lost Tribe: After a boat crash, a group of friends are stranded on an uncharted island where they encounter an ancient tribe of humanoid creatures. Sounds like Predator on Gilligan’s Island. 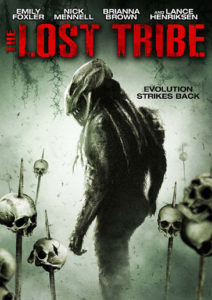 While the new Jason is terrorizing visitors at Universal’s HHN, AMC will be airing all of his classic adventures in sequential order from parts 1 through 9 during their annual Monsterfest beginning next Monday, October 18th. The schedule is listed below, and you can check out AMC’s website for more information on the 2010 Monsterfest.