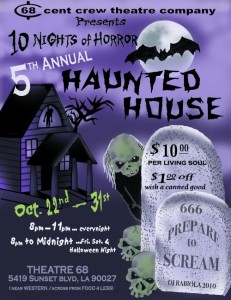 In a tiny strip mall on the less-glamorous portion of Sunset Boulevard in Hollywood, Theatre 68 seems practically hidden. But it’s worth seeking out, because this little theatre is packed to the rafters with pure terror.

There’s free parking on the roof, but we accidentally zoomed past the small alleyway to the parking area and found easy street parking instead. The theatre is actually the first storefront in the strip mall, but it’s easy to go right past it, so be on the lookout. On the night we went, they had a flashing red light on the outside, so keep your eyes open for that, too.

The dimly-lit waiting area inside the theatre is adorned with pictures of serial killers, and a short back story about the haunt is posted on the wall for you to read while you wait. Essentially, the story is that a theatre group decided to put on a haunt, but one of the actors was a real killer. The back story also gives you a tease of a few of the rooms you’ll be going through. There’s a small video screen in the waiting area, which shows the previous group as they enter the haunt, and the camera focuses on them until they get their first scare. You don’t see the scare; only the guests’ reactions, which was a huge scream. This was a great suspense-building tactic, and it really upped our anxiety before we even entered the haunt.

We feel that the scares in Theatre 68 are very unique, and spoiling them by giving too much detail in this review would be a real shame, so we’re going to keep it pretty general. Suffice it to say, however, that it’s very scary.

The haunt is set up as different rooms that require you to pause to take in the scene and wait for the scare. The waiting part really adds to the suspense and tension. Many of the rooms appear to have dead ends, and it’s sometimes unclear which way to proceed. However, the actors do a remarkable job of remaining in character while directing you to the correct way when you get disoriented. The theatre has also devised truly ingenious ways to use their space and create unique and surprising effects, which include rooms that seem to change shape and scares that seem to come out of nowhere.

Some of the rooms are very small, putting you up close and personal with the actors. This is probably one of the reasons they keep the groups small (ideally, 2 people at a time). The small spaces add a level of unpredictability, and the scares are directed right at you, and they were able to scare us constantly. We screamed like crazy through the entire thing. In addition to the standard “startle” scares, the actors and small rooms make it so that you feel just uncomfortable enough throughout the entire experience that you’re constantly on edge and completely unsure of what might come next.

The sets are highly detailed, and the lighting is excellent. This is a theatre after all, so no doubt they’re experts in this aspect. The actors all do a great job and, as you might expect, are excellent in character. But they certainly don’t overract, either. They’ve really found the perfect balance between theatre and haunt.

Theatre 68 was truly a highlight for us this season. This is actually the 5th year of their haunt, and we can’t believe we’ve let it go 4 years before attending.  We found it to be one of the most scary and fun haunts we’ve been to in a very long time. We are definitely going to put this haunt on our must-do list for every year in the future. And at $10 and with free parking, it might be the best dollar-to-scare value out there (and if you bring in a canned good, you get $1 off).

Theatre 68’s Haunted House runs every night from October 22 through 31 and will be open until midnight this Friday, Saturday, and Sunday (October 29-31). We highly recommend checking it out.