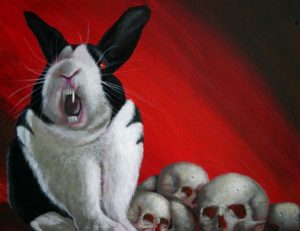 Here’s a list of this spring’s Haunt Conventions across the country. Keep checking ScareZone for updates and information. Only 6 months til Haunt Season!

The haunted house industry FINALLY has its own haunted house show and it will be held in the America Center in St. Louis, Missouri on March 10-13 2011.  Prepare for three jam packed days of over 100,000 square feet of haunted house products, amusement products, seminars, education, and haunt tours through one of America’s best haunted houses “The Darkness“. This is THE MAIN event of the year if you own or operate a haunted attraction, amusement park or any sort of amusement facilty. The show floor will showcase over 100 vendors from the Halloween and Haunted House industry!  Several entertain events are held, annual meetings for the Haunted House Association, tours through several haunted houses like The Darkness and much more.

This is held in New York this April 9-10. Make-up artists, vendors, manufacturers and enthusiasts convene for the make-up world’s biggest gathering to discuss, display, discover and collect the best the industry has to offer.

HauntCon travels each year to a different city so that attendees can visit haunted houses around the country. Hauntcon is held each year in the month of April 27- May 2nd. This years show will be held in Louisville, KY. The tradeshow floor is smaller but with some really cool haunt vendors with cool products on display.  These shows (MHC, HAUNTCON, etc) do not offer the sheer amount of vendors and massive tradeshow displays as the Transworld Haunt does however because of their cheaper booth prices it opens the doors to smaller up and coming vendors.

This years event will be held May 5th-8th in Philadelphia and will feature a tradeshow floor, haunt tours, and seminars. The show leans more to enthusiasts and home haunters than professional haunted house owners.  Because there are so many haunts in the area the show planners are able to offer tours through some of the best haunts in the nation.

Held May 12th-15th in London Ontario, Canada. Haunts from around Canada will visit this show to trade ideas, teach seminars and much more.

May 13th-15th in Salem, OR. Another smaller show where haunters will gather to learn new tips and trade ideas.

June 3-5 in Petersburg, MI. This is another small haunters gathering with a focus on Michigan hauntsevents include demos, door prizes and events for kids of all ages.

MHC is held in Columbus, Ohio June 3-5, 2011. Learn from many other haunted house owners, actors and more. The show somewhat leans towards the home haunts and enthusiasts more so than just the professional haunt owners however the show features a ton of vendors and events for both home and professional haunters.

November 14-18. The IAAPA (International Association of Amusement Parks and Attractions) show is the biggest amusement show on the entire planet held every year in Orlando. The show is over 750,000 square feet and offer over 1000 vendors.  On average there are about 100 haunt related vendors to choose from. Additionally IAAPA has been producing haunted house seminars each year at their event.

Each year the Corn Maize industry gathers for conference held each March.  The conference consisits of meetings, seminars, education, events, tours of attractions and a small tradeshow floor that includes industry suppliers and much more.  Next event will be held in California during February 2012!