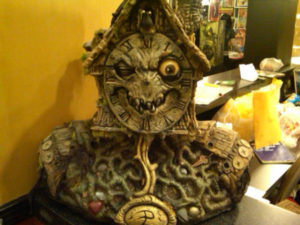 This past weekend Scare Zone was in Burbank, CA, to attend Monsterpalooza 3. This was the convention’s biggest year yet, with attendance at capacity and the presence of some of the film and haunt industry’s top talents. J. J. Abrams and Guillermo Del Toro were in attendance, just to name a few. The convention also featured a few “scareactors” roaming around who were more than willing to take pictures and offer a few scares here and there. In fact, we were “greeted” by a group of monsters who were roaming the parking lot. This made us yearn for haunt season (how many days until haunts?). 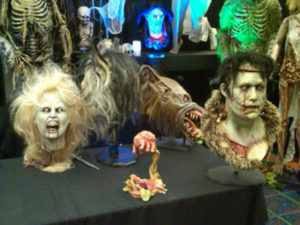 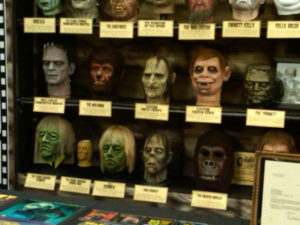 The convention featured the usual crop of vendors selling monster goods ranging from t-shirts, classic DVDs (for those without Netflix), unique masks, props, Freddy claws, and memorabilia. There was also a weekend slate of demonstrations and monster-related seminars. On Friday night we attended the Halloween Horror Nights (HHN) make-up secrets session (“Creating the Fear”), which featured Michael Burnett, Senior Designer and Make-Up/Prosthetics Artist for Universal Orlando (more details on this session coming soon). On Sunday we attended a creature-painting demo by Casey Love and a sculpting presentation by the Shiflett Brothers. 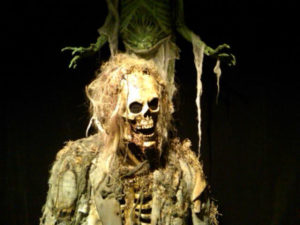 While the vendors and presentations were fun to see, the highlight of the convention was the Museum, which featured life-sized figures and animatronics of our favorite monsters. This darkened exhibit was somewhat scary to walk through as the figures looked as if they were ready to spring to life and attack (at least we were hoping they would). 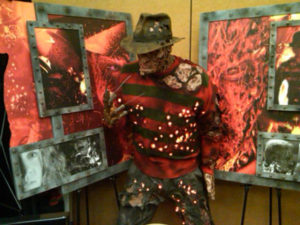 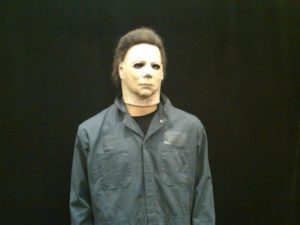 We were able to attend Friday’s opening evening and returned again Sunday afternoon. We did attempt to visit on Saturday, but they were at capacity and were holding the line until people inside left. Even though we saw everything on Friday evening, we discovered a few new things on Sunday. It seemed that some of the booths weren’t fully set up on Friday night, and each day featured new talent and presentations.

Overall, this was a well-run event, and we’re glad that we were able to attend. We were disappointed that it was so packed on Saturday that they periodically were not allowing people in, so it’s obvious that they need to move to a bigger venue. Unfortunately, that probably won’t happen next year, since the program indicated they would be back in the same location for 2012. Also, we’re not exactly fans of the “buy a celebrity autograph” system. We saw a quite a few celebrities sitting around looking sad and miserable because no one was buying their autographs. People even seemed hesitant to approach them to say “hi” because of the obligation to pay for the interaction. While this is standard practice at conventions, we feel that that it’s awkward and disingenuous. It would make everyone’s time more worthwhile if the celebrities didn’t charge for autographs. Perhaps if instead they sold their pictures and memorabilia and signed the items for free, people would feel more inclined to pay for the interaction. It isn’t as if Eddie Munster’s signature alone has any significant value in the street. 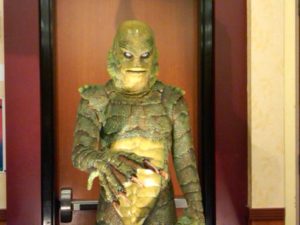 We also feel it would be great for them to expand the museum experience and even offer a haunt. With the presence of Bone Yard Effects, who designs the masks used at HHN Hollywood, plus other local haunt designers and owners in attendance, this would be the perfect venue to provide a sample of what’s in store for the coming haunt season. Of course, we’re addicted to haunts, so we would like to see one everywhere we go. Scare Zone will just have to wait until May, when we will be attending an evening of haunts during the National Haunters Convention in Philadelphia! 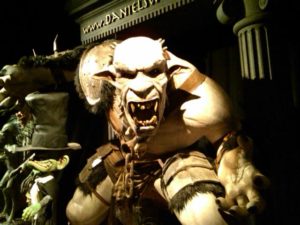 Monsterpalooza event rating: 4.5 Skulls out of 5