Time really dies as it seems like just yesterday we were at the National Haunter’s Convention (NHC) in Philadelphia and going through a night of frights at both Scare Brothers Haunted Nightmare and The Fright Factory. It was a nice treat for us to get some mid-year hauntivity, since there’s still over 3 months until haunt season truly begins.

Given that these haunts aren’t usually open during this time of year, we felt it wouldn’t be fair to give them actual ratings. However, we’ll share our comments on their staging, effective scares, and overall potential.

It was very cool for both of these haunts to open their doors and host the NHC tour. We very much appreciate the managers and the scareactors for committing to be open during an evening in the middle of the year. As mentioned in our review of NHC, the tour was very OVERPRICED at $175 per person (even though it included transportation and “dinner”), but that won’t be a consideration for our commentary. We just hope that with the steep tour prices we paid, these haunt folks were well taken care of for their night of work.

The main thing we found to be bizarre was the fact that both of these competing haunts operate inside the same place. They’re located in the basement level of the same building/warehouse, and it was hard to tell where one ended and the other began.  If you live in the area, it’s great for a one-stop “chop,” but from a business perspective, it’s rather odd. What we did learn on the tour is that Scare Bros. is actually up for sale and for our tour, volunteers from the SouthEastern PA Home Haunters operated the haunt.

It should be obvious to the Fright Factory’s owners that buying up the entire space would be a great opportunity for them to expand and to become the largest haunt in Philadelphia. In addition, some of the most compelling and expertly executed effects we saw were in their mazes, which would be a big benefit for the Scare Bros. mazes.

Both haunts are composed of 4 differently themed mazes, offering a total of 8 mazes in one location (that’s even more than Universal Hollywood’s HHN). Given it was the off season, the venue seemed to be very dark and dusty. There also were a ton of props being stored in the open waiting areas and not much theming given to the entrances of the respective mazes. We could imagine this place being transformed into a nicely themed and clean central area with a snack bar, entertainment, maze queues, and functioning restrooms. Given the space, we also think it would be most effective to allow people to choose the order of the mazes they go into rather than having them all wait in a single line that feeds them through the mazes in a chronological order. It wasn’t too bad of a wait for the 200 of us in the NHC tour, but it did go slow and we can only imagine the line chaos when the haunts are open during Halloween season.

We’ll take a look at the haunts in the order in which we experienced them. We were fortunate to go through all the mazes twice: once in “show mode” and a second time with the lights on. The lights-on tour allowed for us to take some cool pictures and video, which you’ll also see in the following profiles.

We first entered The House of 1,000 Zombies, featuring Claustrophobia.  This maze has a good amount of detailing in the sets, providing the scareactors with some great hiding places including a wall that slams down next to guests as they walk past it. The maze’s story didn’t seem to be fully coherent, as during the course of the maze we went from an abandoned house to a prison, back into the house, and finally outside. The maze also featured non-zombie characters such as Hannibal Lector. Nonetheless, this seemed to be the scariest of the Scare Bros. mazes to go through.

Without notice, you then walk from the last room of “1,000 Zombies” into the second maze called Dungeon of Darkness. This maze was actually very creepy, being the longest and most effective “in total darkness” mazes we’ve experienced. It also included some very nasty surprises such as triggered air blasts and a shockpad placed onto the wall. If you use your hands to feel your way through the darkness, this maze will give you some literally spine-tingling shocks. Seeing this maze with the lights on actually made it even scarier!

Next up is Chuckle’s Circus of Fear. This place is loaded with demented acts and some really evil clowns. The killer clowns in here really were top-notch performers, bringing a great deal of silly fun to their scares.  The downside was the fact that the maze was rather short, and even in show mode it seemed to be a little bright inside the maze. We weren’t sure if it was designed to be in 3D, but it looked like some of the set pieces would have been even more stunning and disorienting had we been wearing 3D glasses.

Finally, we went through The Haunted Nightmare, which took us through a bouquet of different scenes from some famous and some not-so-recognizable horror movies. The sets in this maze were by far the best of the four. We can imagine this one to be very terrifying when it’s fully staffed. While we’re not real fans of mazes that go through random scenes without a cohesive story line, the theme of being in a horror movie–type nightmare helped us to suspended our preferences, and we were throughly entertained by the design and monsters in here.

Scare Bros is a fun haunt. It isn’t necessarily the most sophisticated nor scariest haunt we’ve been in, but it isn’t close to being one of the worst, either. If they do indeed get bought by the Fright Factory, with some more TLC we can see this haunt get upgraded and grow to become a first-class haunt on the East Coast. 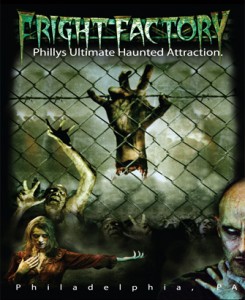 The Fright Factory uses some of the industry’s latest and greatest scare tactics along with definitive story lines and themes for their mazes, which creates more submersible environments and a truly foreboding atmosFEAR. All of these elements are big plusses, and we can see why the Fright Factory was featured as one of  “America’s Scariest Haunted Attractions” by the Travel Channel. 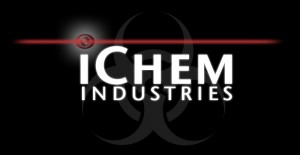 The first maze inside the factory was iChem Industries. This maze takes a lot of its cues from Biohazard aka Resident Evil. They story here is that sometimes trying to make the world a better place can have evil consequences. This maze takes victims through iChem’s subterranean laboratories, where scientists claiming to be detoxifying the planet are actually using those toxins for genetic modification experiments (GO GREEN). We encountered some startling scares in in this maze, along with a few interesting effects such as projected shadows. We would have liked to have seen more scareactors in this maze, but the few we encountered were rather vicious. It was also nice that this maze started with a “tour guide” who helped establish the storyline before we were abandoned inside the darkness of the iChem facilities. 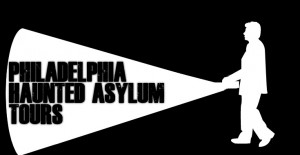 The next maze we ventured into was Philadelphia Haunted Asylum Tours. This was by far the best maze of the night. The opening pre-show builds up a great amount of suspense that is then carried throughout the rest of the maze. Throughout, it has all of the best elements in place, including high-end special effects, elaborate set designs, and very talented scareactors.  The story here is that we’ve “volunteered” to explore the sinister past of one of Philadelphia’s most infamous asylums. The “guided tour” takes visitors deep into the asylum, where Dr. Robert T. Brash, the hospital’s chief of psychiatry,  experimented and tortured his patients. That is, until the day when the patients took over the asylum, killing the entire staff and eventually turning on each other. The scares kept coming in this place, and many of the effects seemed to be trying to play with our minds as if an attempt was being made to get us to check ourselves into this sinister asylum. 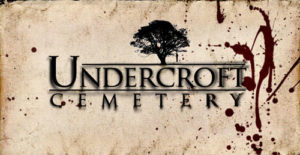 After our experience in the asylum, it was going to be hard to top those scares. The next maze was Undercroft Cemetery. This is far more simplistic than the previous two as far as the storyline goes. It does have a few good sets and enthusiastically screaming scareactors, but it isn’t much more than a typical haunted graveyard-themed maze. They story is simple: you’re walking through the woods and encounter an old cemetery with a strange stone mausoleum, which you—of course—have to go inside. While the theme was rather simple, the finale of this maze was memorable with a triple attack by two large animatronics and a scareactor who could break glass (or your eardrum) with her screaming abilities. 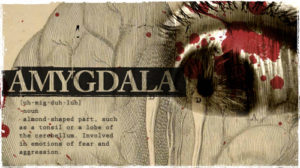 The final maze at the factory was Amygdala. The name means an almond-shaped part, such as a tonsil or a lobe, of the cerebellum, which is involved in emotions of fear and aggression. We didn’t get this maze at all. Most of it was very dark, but it wasn’t nearly as effective as the Dungeon of Darkness over at Scare Bros. Again, being that this wasn’t the regular haunt season, we don’t want to be overly critical, but we did see some notes backstage about some work they need to do to this maze. They must also be aware of the fact that this maze is not scary. Our suggestion is they scrap it and establish a new theme to better complement the other three mazes.