A few months ago, we reported that the Winchester Mystery House in San Jose, California, was going to get its very first maze, brought to you by the folks at Sinister Pointe.

Now, details of just what this Halloween event will entail have been posted on the Mystery House’s Web site. And we’d like to be the first to say that it looks awesome!

They’re calling the event “Fright Nights,” and it will be open weekends and selected weeknights September 30 through October 31. The event will include one maze, the haunted flashlight tour of the mansion, roaming “scare performers,” and “nightmare-inducing tales.”

They’ve had the flashlight tour in the past, so the addition of the maze is the real news here. And they’re not messing around: Sarah Winchester herself is the star of the maze. They’re digging up her bizarre life story and turning it into a haunted attraction for our amusement. Everybody wins! Well, except for respect of the memory of the real Sarah Winchester, of course. Anyway, on to the description!

For a lifetime, Sarah Winchester built and built and rebuilt her house to avoid this treacherous curse and escape her husband’s legacy of damnation. But this Halloween, a portal, a gateway between Heaven and Hell, has been irretrievably opened. Those who perished long ago are seeking revenge, now ready to sacrifice souls before midnight strikes.

Guests find themselves trapped inside a mansion empowered by the undead, traveling through the Corn Fields of Winchester Mystery House, into the haunted ruins of the family Graveyard and ultimately, a showdown with Sarah herself in the middle of one of her infamous séances.

Survive it all, LIVE, only at Winchester Mystery House.

We can’t wait to see what a Sarah Winchester “scare performer” looks like! Maybe something like this? 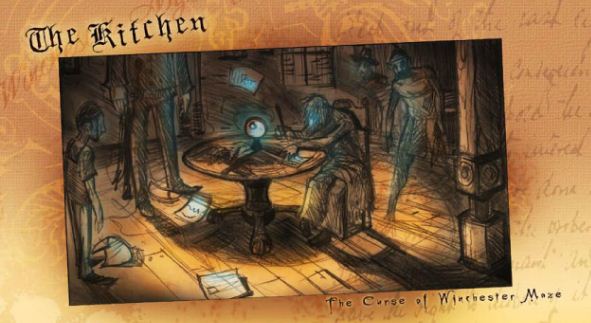 Along the way, guests will also run into giant spiders, scary “pump house” workers, and a corridor of pumpkin heads (which looks particularly amazing). 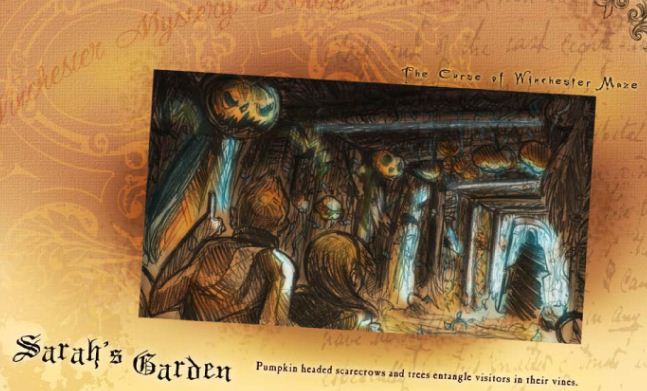 Check out the web site to see more of the storyboards. The story and atmosphere of this haunt look first class, and we know that with Sinister Pointe at the helm, it will be as scary as hell.