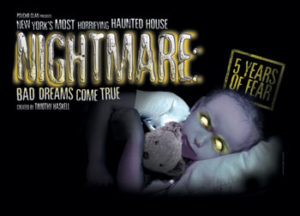 “New York’s most horrifying  Haunted House” will have a new theme for 2011 and they’re looking for you to share your repressed childhood memories to make it even scarier.

Last year they terrified guest with Superstitions. For this year’s theme we’ll have to endure the terror of Children’s Stories, the dark, twisted ones of course. Or the original tales of what you know as family friendly ones that actually started out scary and murderous. According to Timothy Haskell, Creative Director for NYC Nightmare, the haunt won’t actually be called CHILDREN’S STORIES, but he is thinking either NIGHTMARE: FABLES or NIGHTMARE: FAIRY TALES. Which do you like?

He’s also offering haunt stalkers a chance to participate in deciding which stories will be incorporated into the haunt. So break out those old Grimm’s Fairy Tales or Aesop’s Fables, etc. and let Tim know which fairy tales you would like to see turned into rooms at their haunted house. He wants to know “the creepiest, ickiest, scariest children’s story you have ever read”. He’ll also consider the sweetest and perhaps flip it so that it’s dark and scary instead.

Children are creepy, and children’s stories are creepier. We can’t wait to return to NYC this October to check out what Nightmares Tim and his team will churn out. 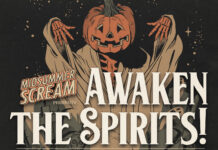