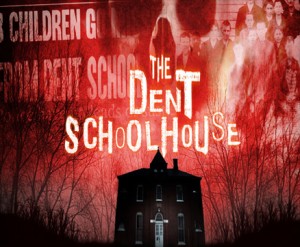 School may be out for the summer but strange happenings have been reported again at the Dent Schoolhouse in Cincinnati, Ohio. According to their site, several local residents heard the old school bell at Dent ringing around 3:15am/3:22am on June 13th, 2011.  Staff and security were all gone from the building but someone or something has stayed after class. Could it be Charlie the Janitor tidying up before the kiddies return to school?

Looking back, in 1894 the Dent Public School was opened. Teaching all grades kindergarten through 12th grade, the school was seen as the ideal establishment to send the local school children.  The school was equipped with the finest teachers, cafeteria workers, and janitorial staff for miles.

The school was very successful and thought highly upon.  But in 1942 several students, known for their “disruption in the class room”, mysteriously vanished.  They were last seen at the Dent Public School.  The Dent police began an investigation and came to the conclusion that they must be runaways.  Two years later, 1945, four students went missing in October.  Local police were baffled as to what was happening to the students.  Rumors started to spread that the local children disappearing had something to do with the school.

School remained as normal but rumors kept coming out about the missing kids.  It wasn’t until 1952 when three more students were not seen after school.  Students at the public school began to complain about a strange smell that was coming from the basement.  When Charlie, the head of janitorial services, was asked about the smell he said it was the pipes clogging up.  After a couple weeks the smell subsided, but new rumors spread that Charlie the janitor had something to do about the local kids disappearances.

In October of 1955, more than seven students vanished with out a trace.  The local kids complained about a smell that was coming from the basement that was actually causing some children to pass out.  Community members of Dent rallied together and stormed up to the Dent Public School.  The angry mob bust down the large doors of the school house and proceeded to go into the basement of the school.   The local rioters were shocked at the grizzly sight that was strung throughout the janitor’s basement.

The basement was covered with the decaying remains of the missing students.  Bodies had been sealed in barrels, wedged behind the brick walls of the basement, and left in sanitary tubs to decay forever.  A search for the Janitor went over two weeks, but he was never found.  The school was closed shortly after the discovery. 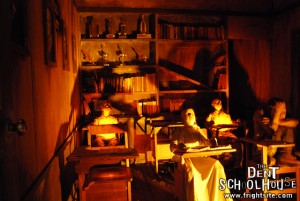 The old school house is now said to be haunted with the roaming spirits of the children that were “taken care of” by the Janitor.  Rumors are that the Janitor came back after several years of the school house being closed.  His body was never found, but his spirit is still said to clean the old building.  The spirit is also said to have “taken care of” local trespassers that try sneak a peak at his home in the basement.

This coming fall it’s back to Scares for the faculty of Dent and they’re promising to have an even more intense curriculum and, for those troublemakers, the Detention Hall will also be open. The Scare Zone has heard nothing but great things about this award winning haunt. It’s considered one of the scariest haunted attractions in the nation and is known for its movie like quality and detail. We’ll have to get our permission slips signed so we can a take field trip to visit this killer campus  but for our fellow Haunt Stalkers in the Cincinnati, Ohio area here’s the details for the 2011 fall ‘Slashmester’.

For prices and more information check out the school’s site HERE.