HHN Hollywood made the unsurprising announcement that Rob Zombie’s House of 1000 Corpses in 3D will return this year. Given that this maze had the most excruciating long line last year, we guess they wanted to give people another opportunity to see it.  We should note that this actually will be the third time they’ve done a version of this maze. In 2000, they also had a version of HOTC, which we remember as being more terrifying than the 2010 reincarnation. At that time, Rob Zombie was working to get his movie distributed by Universal. The 2010 version wasn’t bad, but it wasn’t the scariest either. We actually found the 3D diminished some of its scare potential. We wonder what changes, if any, they have in store for this year’s version. 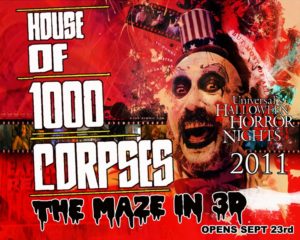 We’ll remain optimistic that the anticipated final two maze announcements will be even more exciting. Possibly we’ll see some of the top ranking themes from our most expected mazes list: Evil Dead, Trick ‘r Treat, Scream. To date, we’ve accurately guessed The Thing, Hostel and House of 1,000 Corpses.