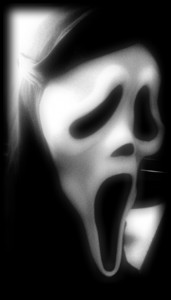 As we scooped last week, it was announced today that this year’s Terror Tram at Universal Studios Hollywood will be themed to Scream. Ghostface will also be this year’s HHN Hollywood headliner with a Stab 8 themed scare zone at the studio’s entrance.

The terror tram story line will have guests touring the set of Stab 8 and “3 other” horror movies in production on the Universal backlot. This tour will be part of Universal’s “Stab-a-Thon,” a Stab movie fan fest. During the festivities, Ghostface will appear for a real-life Stab-a-Thon on the tour’s unfortunate guests (victims).

According to Murdy’s tweets, production on Stab 8 has already begun to capitalize on this publicity bonanza, the theme park has started letting tourists on the Universal Studio Tour visit the production. However, a barrage of unauthorized photos and unsettling rumors about the troubled production have been lighting up blogs and chat rooms across the web. The most damaging of these leaks is a homemade video purporting to show “Ghostface” attacking and killing tourists on the Universal tram!

John Murdy has also tweeted that “a blogger is gonna get it” during the terror tram video segment. Should we be offended or honored? Guess we know how he really feels about us uncovering the rumors. Just ask Gale Weathers, being a reporter is a tough job, but somebody has to do it.

This is a theme many HHN fans have been expecting for a few years. After seeing the most recent movie, we weren’t certain how good an entire maze based on Scream would be. However, on the Terror Tram, Ghostface can wreck havoc as it places “us” victims in an open setting where we can be attacked from all directions. Also, given that Scream is based on horror fanatics taking their “love for scary movies too far” with the “movie within the movie theme,” the Universal backlot is the perfect setting.

Coincidentally, or not, Scre4m is being released on DVD on October 4th. More synergy for HHN. 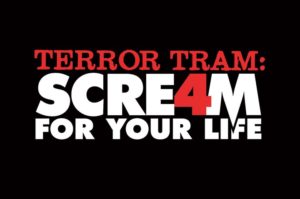