Each year, new haunts pop up around the country, and as they search for their position in the increasingly crowded haunted attraction market, they have to distinguish themselves from other haunts in some way. Haunts have to decide what theme, or story, their maze/walk-through/haunted house is going to tell that will make guests want to visit their haunt rather than the one in the next town over. There are standard themes (vampires, horror movies, hillbilly cannibals) that can be adopted, or more original ones to be invented. And some even combine multiple themes into a single haunt (have you ever walked through a haunt and progressed from vampire lair, to alien autopsy, to slaughterhouse? Because we certainly have). But with all of these possible themes, the iconography and spirit of Halloween itself can sometimes be lost in a maze of cannibal butchers and killer clowns.

But not at Fright Nights at the Winchester Mystery House. Their haunted attraction has captured the elusive magic of Halloween in a nearly perfect way. 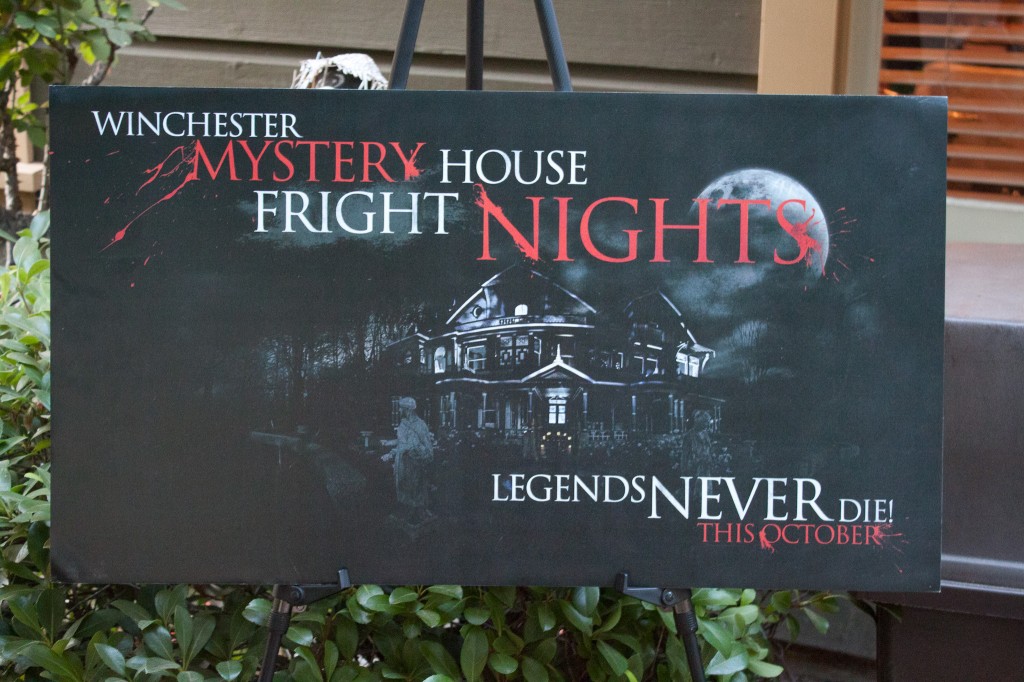 The “Curse of Sarah Winchester” maze is located on the grounds and in the outbuildings of the famous Winchester Mystery House (WMH) estate in San Jose, California. The haunt tells the story of Sarah Winchester and the house she built to keep the spirits of those killed by her husband’s Winchester rifles at bay. The house itself has an interesting history and many ghost stories that go along with it, so WMH had a great pre-existing story on which to build their haunted attraction.

The attraction begins in front of the house, where you encounter the caretaker lurking about the porch. Ambient lighting in the windows of the house and rows of Jack-o-Lanterns really pull in the Halloween theme right away. This is actually part of the line, but it sets the tone and spirit for the attraction immediately. 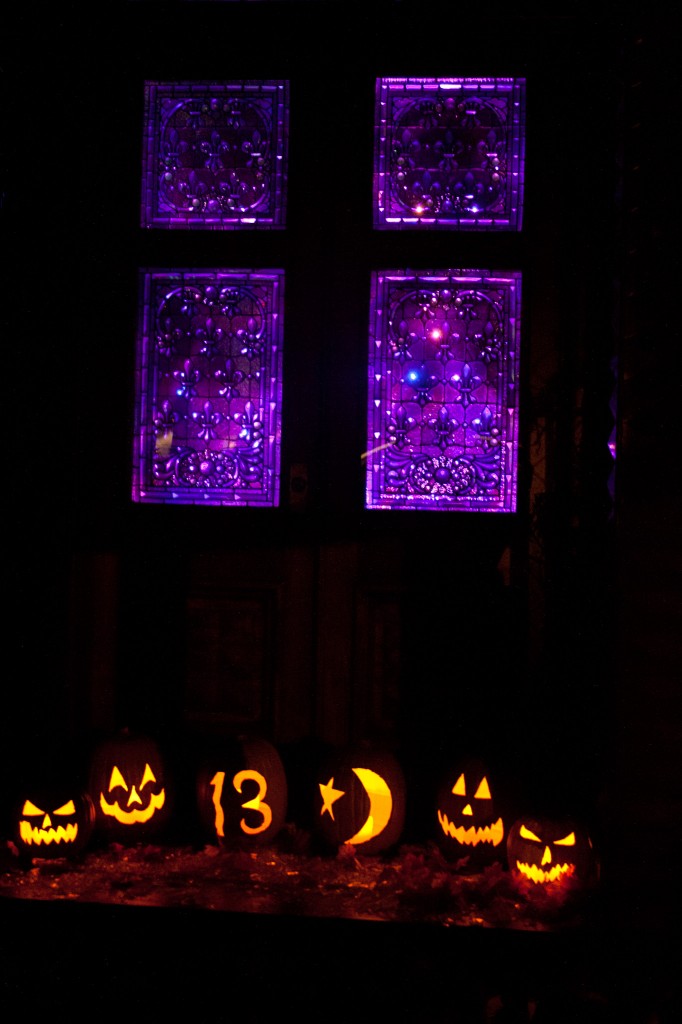 The first real scene is a sort of creepy playground with some scary child props and a creepy scareactor asking for her mommy. This scene is spooky and has some great lighting, but we weren’t entirely sure who these children were supposed to be. Given the tight coherence of the rest of the maze with the legend of the Winchester house, this was the one scene that didn’t seem to fit.

After leaving the children, you enter the estate grounds where men in old-time Western wear wield the Winchester rifle in your face. Towering scarecrows with Jack-O-Lantern heads loom above to create an impressive scene. The lighting throughout the maze was great and really set an eerie and haunting tone. 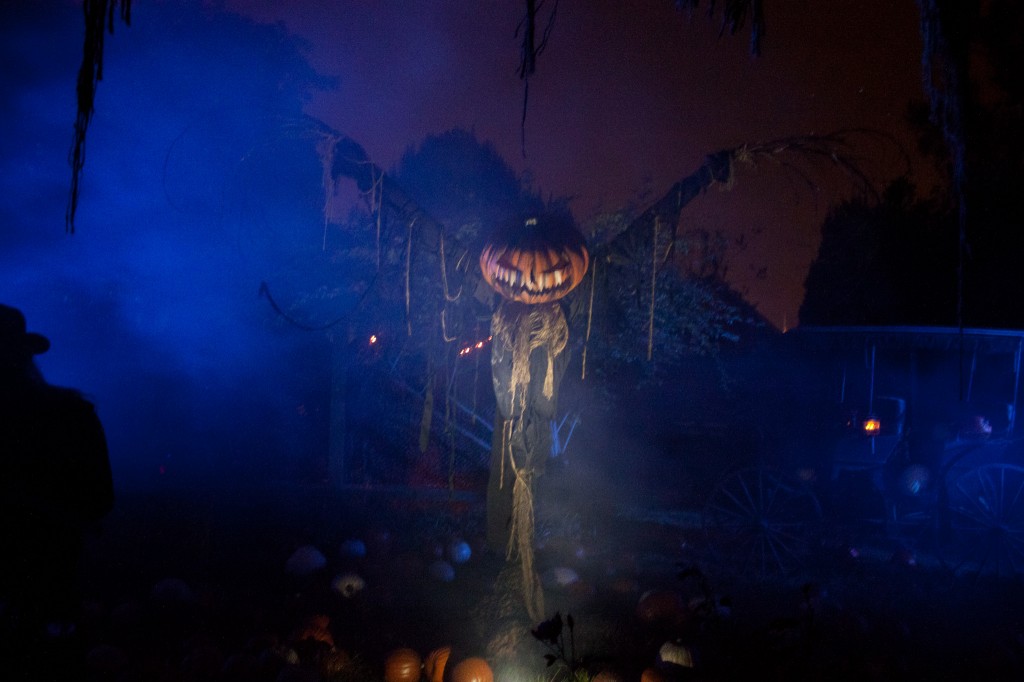 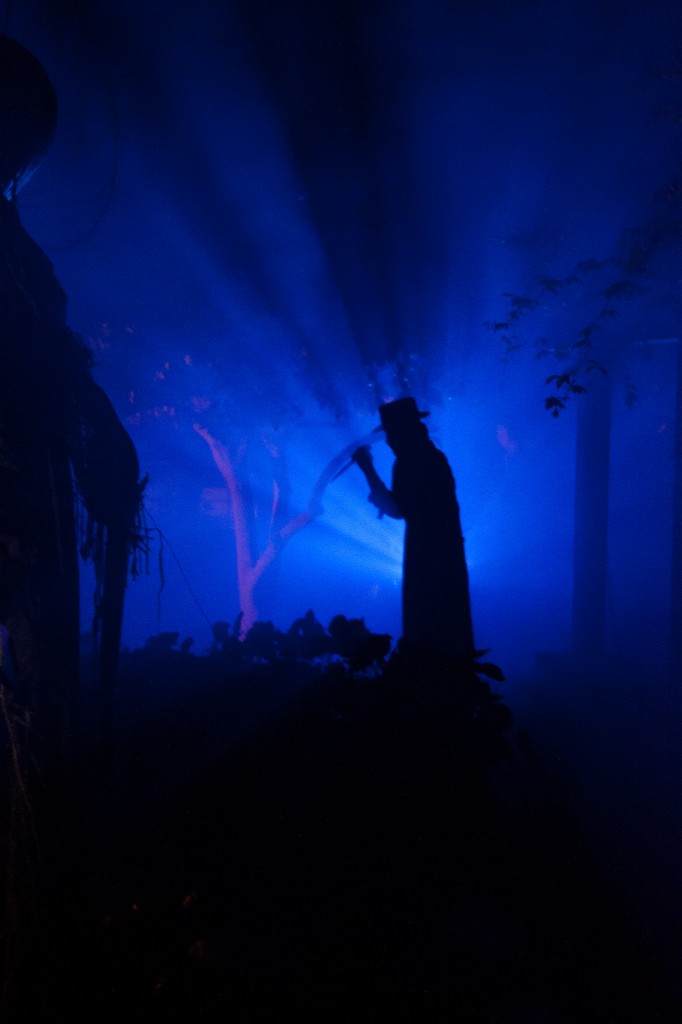 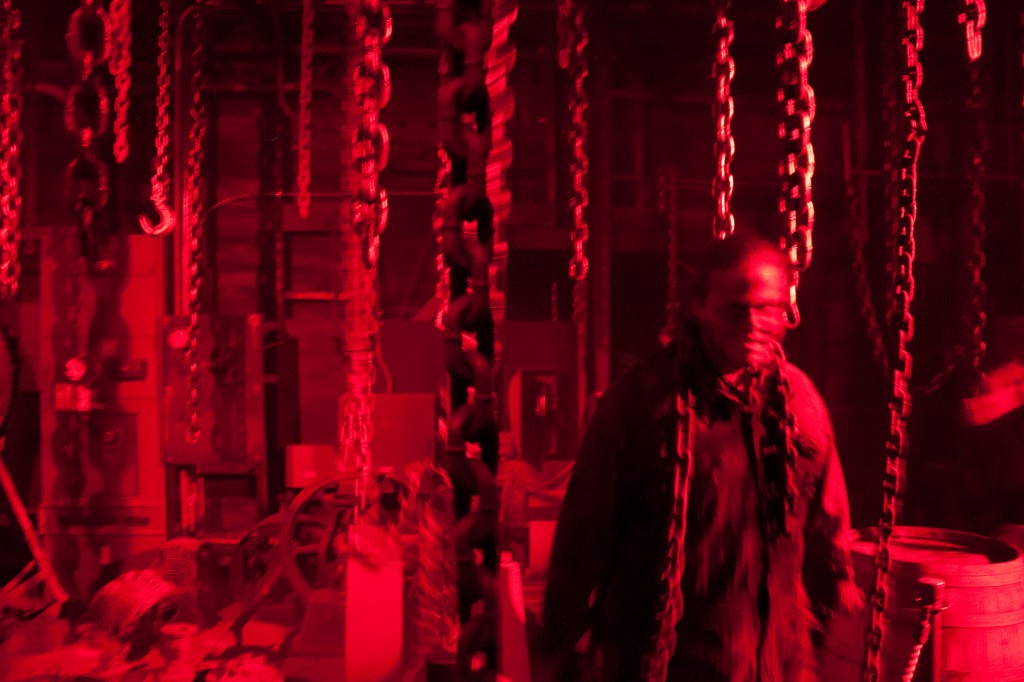 The maze winds between indoor and outdoor sets, for example, through the pump house and then back outside into the gardens. The scent of cooked flesh greats you in some scenes. Throughout the attraction, we were very impressed by how good the scareactors were. Although it was only opening weekend, they were fully in character, and the scares were very well timed. There are a lot of “team” scares, where one actor will distract you while the other actor comes up right behind you. The maze was stocked full of actors, and at times, the scares seemed relentless. We screamed in almost every scene. There was hardly a lull in terror. Two of our favorite scares include an actor who seemed to lunge right out of the ground and another who completely surprised us in the parking lot scene. In fact, the actors in the parking lot scene should be especially commended for their perfectly timed scares. 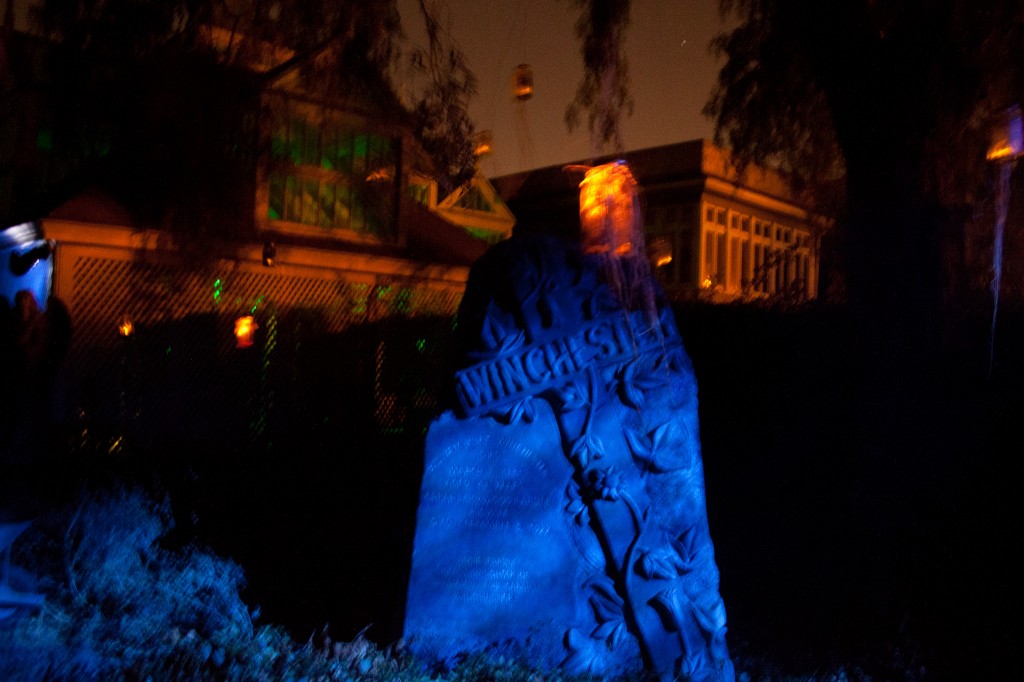 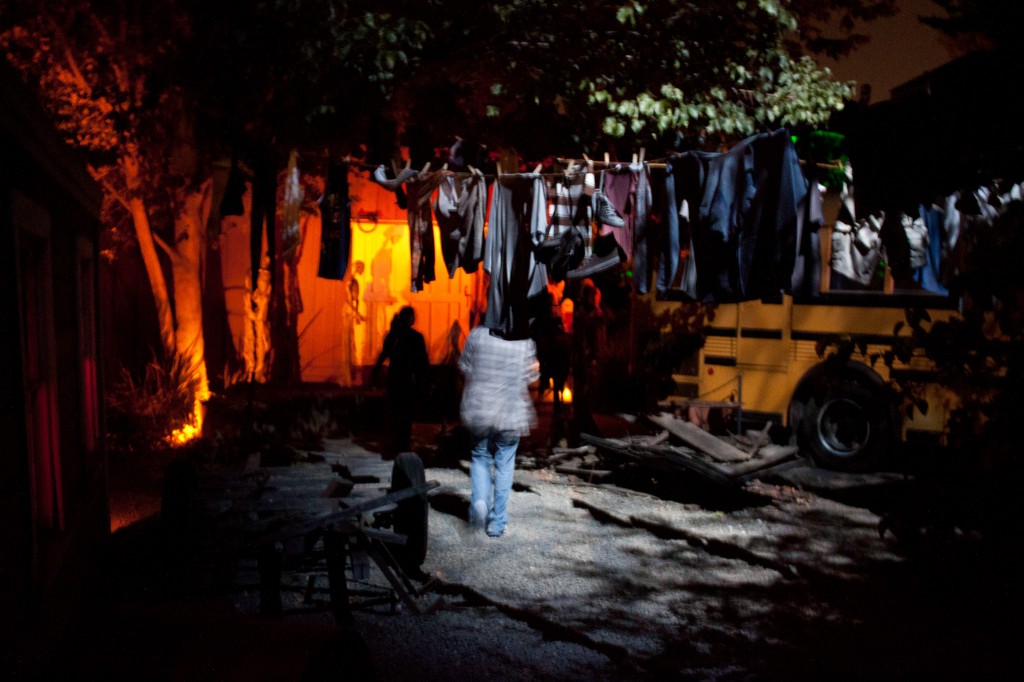 The climax of the maze is the seance scene with Sarah Winchester herself, dressed in black and calling the spirits. There are some pretty awesome effects in this room. We found ourselves completely stopped to just watch what was happening. But don’t linger too long, because there are Native American spirits lurking just around the corner! 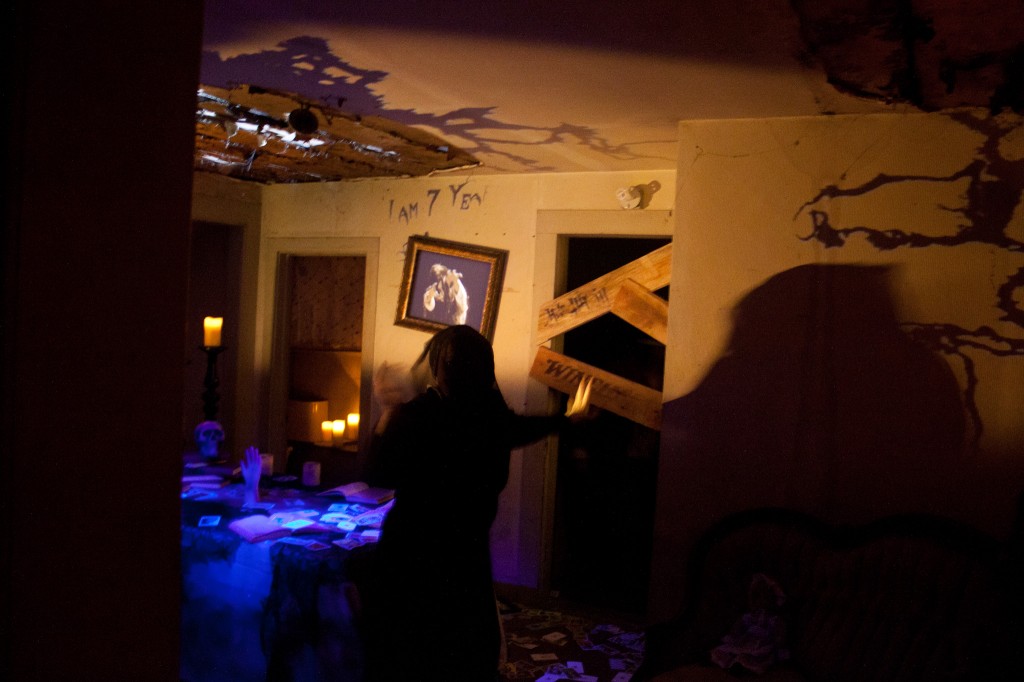 Finally, there’s a bloody hay maze to go through with some more scarecrows looming high over you. 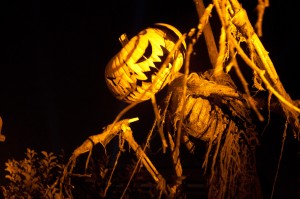 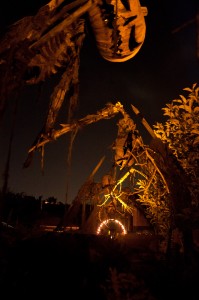 Overall, we really loved this attraction. Each scene was completely detailed, perfectly lit, and told the story of the Winchester Mystery House while bringing in the true icons of Halloween, such as Jack-o-Lanterns, scarecrows, and ghosts. And make no mistake: this attraction is SCARY! There are a lot of unexpected and well-planned scares.

$15-20 (depending on the date) is a bit pricey for a single maze, but it’s actually really long. It took us about 12 to 15 minutes to go through. We actually think it’s worth paying extra for the VIP ticket ($25-30), as that ticket not only gets you to the front of the line but also lets you go through as many times as you want in a single night. This maze is so detailed that you’ll definitely want to go through more than once. We went through three times and got scared in new places with each round.

If you’re in the California Bay Area this October, be sure to check out this haunt.

Curse of Sarah Winchester Maze: Ratings (rated from 1 to 5 skulls)

The Winchester Mystery House is also offering a flashlight tour during the Halloween season. This tour seems almost identical to the daytime tour, except they’ve turned the lights off. During the tour, there’s an emphasis on ghost stories associated with the house, but with 20 people shining their flashlights all over the room, it’s not really that dark, and not scary at all. In fact, we recommend skipping the flashlight tour and coming back in the daytime to see the interior of the house, if you’re interested. The details and architecture are unique and worth seeing, so it’s actually a silly idea to take the tour with the lights off. But they do offer a maze and flashlight tour combo ticket. Be aware that the flashlight tour is 65 minutes.