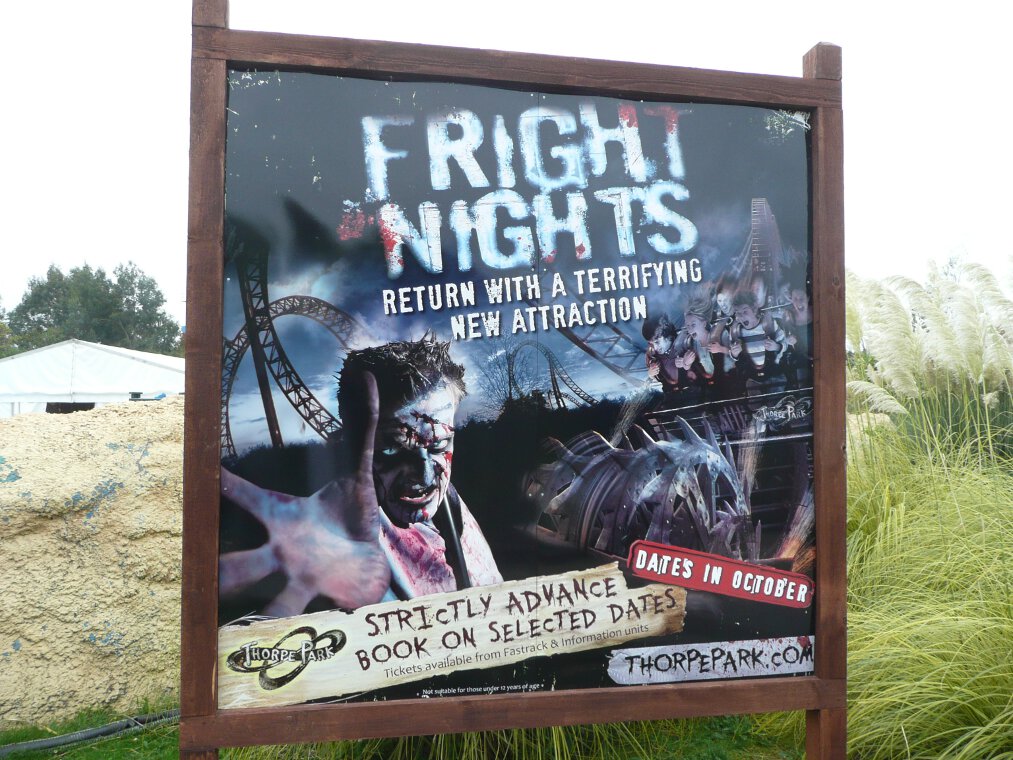 Exclusive for Scare Zone, here’s a review from our fellow Haunt Stalkers at Theme Park Tourist of the new 2011 maze Experiment 10 at Thorpe Park’s Fright Nights. 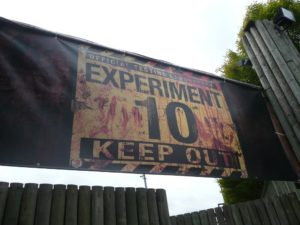 The Fright Nights 2011 Halloween events are now well underway at Thorpe Park in the UK, featuring a line-up of five horror mazes. Of these, four (Se7en, The Curse, The Asylum and Saw Alive) are returning from previous years. That leaves one, Experiment 10, as the sole new addition for this year. Does it live up to expectations?

Experiment 10 is located in Thorpe Park’s arena, and is made up of a number of portable container crates. These are themed around a government test laboratory, where experiments on humans have taken a serious turn for the worse. The external theming is more impressive than for any of Thorpe Park’s other mazes, two of which (Se7en and The Curse) are basically giant tents set up in drained-out swimming pools. Unpleasant-looking doctors circulate around the queue asking guests questions about their health, adding to the atmosphere of anticipation. Meanwhile, the blood-stained walls of the containers are a clear indication that the experiments are not going to plan. 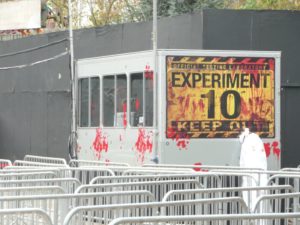 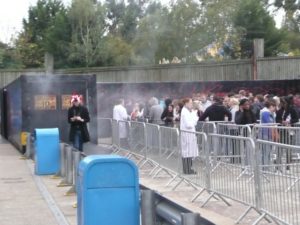 After reaching the front of the queue, guests are herded into groups and shunted into the lab’s “reception” area. There, they are greeted by a well-spoken and pleasantly dressed scientist. As they are welcomed onto a tour of the Experiment 10 lab, there is time to look around the room at some nice details, including photographs of various demented-looking colleagues. The actors throw themselves into their roles nicely – with ours peppering us with unnerving questions (“What blood type are you? We’ll find out soon enough!”).

On entering the first room inside the labs themselves, things begin to go seriously awry. Guest are suddenly broken out of the “hands-on-shoulders” comfort zone that they associate with the other Frights Nights mazes, and sent off on their own into the first section. While it’s best to keep the full sequence of events a secret for those who haven’t yet experienced Experiment 10, be warned: claustrophobics will not like the first half of the maze at all. When we eventually emerged back into a room with the rest of our group, we were a little frightened but laughing uncontrollably. However, at least one of those accompanying us was literally begging to be let out of the maze.

From there on, things become a little more traditional. Once the disorientation of the initial set-piece wears off, Experiment 10 becomes a fairly standard walkthrough maze past a series of predictable “evil laboratory” elements. Crazy looking doctors? Check. Surgery table covered in blood? Check. You’ll have seen most of this before – although you probably won’t have been in quite such a hurry to get back out into the fresh air.

While the underwhelming second half of Experiment 10 and the lack of a big finale prevent it from hitting the heights that it perhaps should have done, it is still the stand-out maze at Fright Nights 2011. Though it doesn’t push the boundaries of horror mazes to the same extent as some others have attempted (such as Busch Gardens Tampa with Alone), it is still unique among mazes at major UK parks for featuring a solo element. The plot may not live up to those of the very best Halloween attractions (such as last year’s Boiler House at Alton Towers), but it is still a step up from the generic or non-existent storylines seen in many mazes. There’s a solid base for Thorpe Park to build on next year, and we look forward to being lab rats once again in 2012.