Queen “Scary” On a Steady Course Through Dark Harbor The Queen ‘Scary’ has docked again at Dark Harbor! Last year, Queen Mary was able to successfully change course and offer an exciting new haunt experience that was not only scary but creatively impressive. This year they’ve maintained a steady course with all the high-end effects, unique story lines, and most importantly, the horrifying terrors we experienced last year.

It seems that with a successful year behind them and some positive reviews, many, many more Haunt Stalkers have returned this year to discover one of our most highly rated haunts. While all the mazes are the same as last year, there’s still those who’ve yet to experience them. And for those who did visit last year, the mazes are all worthy of a second visit, as they’ve all been extended with more monsters and more comprehensive story design.

The story of the Dark Harbor sirens has also been elaborated, picking up from last year’s initail voyage. With the vengeful sea-she-demons (say that three times fast) now fighting among each other for domination of the night’s scare-tivities. High above, from on top of the Hell’s Bells Tower, they take turns proceeding over the harbor by taunting and challenging innocent victims who dare to cross their path. The Dark Harbor experience immerses guests as soon as they walk in the gates, or in this case, crates. You enter by walking into a long tunnel of metal shipping containers filled with fog and eerie lighting. With monsters lurking in the corners, it’s truly scary and the best entrance to haunt we’ve ever experienced. The long tunnel passage leaves victims inside the the expansive barricades scare zone which lies in the middle of Dark Harbor. Once inside, there are 5 mazes to choose from, monsters lurking in walkways, and sliders surprising unsuspecting guest from all angles.  In addition, there’s live music, the Mariners bar area, and unique food vendors through out. We did find the mixed drinks to be very watered down so we recommend those of you who want a little libation to just stick to  beer or wine.

We use a 1-5 skull rating system and evaluate the mazes on design and scare factor. We do our best not to spoil the mazes for those who’ve yet to experience them, so we won’t provide scare-by-scare reviews, but we will share highlights and our overall opinions on the effectiveness of the mazes. Village of the Damned (in the village): This maze was significantly improved over last year. There were more monsters and the pacing of the scares was better throughout the maze. We also like how the maze flows between indoor and outdoor settings making it feel like a forbidden journey through the village.  They also utilized the sets better to distract victims and surprise them with tag-team scares (beware of any open coffins you many encounter). One of the highlights include a dark armored guard room with solider “statues” scattered across the walkway which was very foreboding to walk through, to say the least,. We still don’t get the jungle-type landscaped tunnel at the end of the maze which is an anti-climatic end to what is otherwise a very well themed maze. The Cage (in the dome): This maze is very disorienting  with lots of metal and mirrors and fences and hanging heads and jarring noises. This year they made it even more intense with an elaborate and long entrance tunnel filled with flashing red lights. The lighting in this maze is amazing as every light setup enhances the scares in some way. The monsters in this maze do have generic masks, but it actually works as they seem more like crazed human stalkers who are wearing masks to conceal their identity as they attack you. You can get a little  lost in this maze as the pathways are not clearly marked (on purpose) giving the Cage true maze feeling.  There is also a new segment with walls lined with hands which is one of the creepiest haunt sets we’ve been through this season. Containment (on the ship): This maze seemed identical to last year’s version. The story is about a virus breakout on the ship, infecting passengers and crew alike, so we have to make our way out of the infirmary before we catch anything or get caught.  There was some interesting makeup and props used throughout this maze. While we didn’t find it too scary, the group of young ladies in front of us were literary paralyzed in fear. Perhaps, if we didn’t get blocked up behind them, we would of also experienced more scares. Overall, we recommend that they consider using this area of the ship for a different theme next year. Submerged (on the ship): This was a favorite last year, but it seems this maze has sunk a little. It begins below the ship’s decks as water pours in from all around. Victims are drowning and coming out of the dark and water. The opening scene for this maze is well crafted with real water pouring everywhere and a few well-placed animatronics. The smell in the first passage is almost unbearable, smelling like sewage, but being a haunt, it accents the uncomfortable drowning feeling of this maze. While the maze felt a little longer, there seemed to be more dark passages between scenes which were void of monsters. While they were suspenseful to walk through, it was disappointing not getting scared in them. The finale of the maze takes place inside the ship’s pool room, which is reported to be haunted in real life. While the empty pool looked very cool with the lighting and overflowing fog, we again had hoped for more ghosts to assault us. 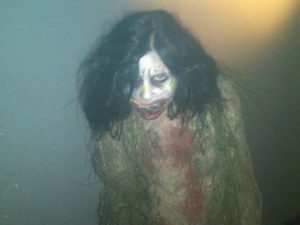 Hellfire (on the ship): The ship is on fire and everything is getting crispy. With the fire victims begging for our rescue we cautiously made our way through this often dark and smokey maze. Being on the ship, the layout of this maze is similar to Containment and Submerged but it has the the best effects of the three. There were some impressive lighting effects with floors and walls appearing to be smoldering in the heat. They also used trick floors to give the sense of falling in the dark over the engine room which was one of the most spectacular and unsettling effects at Dark Harbor. The monsters in this maze were also very menacing popping out of unexpected places and even sliding down walls and pipes. One issue with this maze is that before you can go in, they require that each group takes a photo inside booths set up outside the entrance.  This process  backs up the lines severely and was making many guests in line very upset. This doesn’t seem like a good way to get people to buy a picture as they are annoyed and therefore unmotivated to buy a picture. They should have the booths set up on their own with monsters waiting outside to entice guests to pose with them.

Arrive before opening at 6:15, gates open at 7. Purchase tickets online (here) to receive discounted admission. If crowds are big, we highly suggest buying the front of line pass for an additional $20. We also recommend you see the mazes in the following order: 1) Hellfire 2) Submerged 3) Containment 4) Village of the Dammed 5) The Cage.