As part of Scare Zone’s “haunt jaunt” to the Northern California Bay Area a couple of weeks ago, we stopped into the BayFair Mall in San Leandro to check out Fear Overload.

The haunt is located on the second floor next to Macy’s. The haunt consists of two mazes: 3D Mayhem and The Uprising. 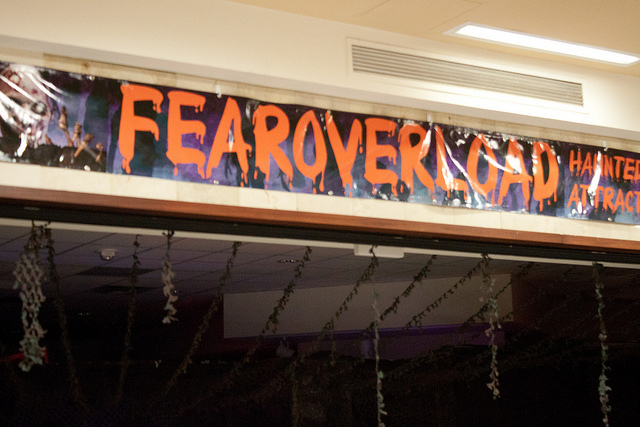 The back story of this maze is that it’s a funhouse that closed down because a family was murdered inside. This maze is in 3D, and so of course features a lot of the standard, brightly colored black-light visuals that have become very commonplace in the past decade or so. A few of the 3D paintings were pretty fun to look at. There are the typical clowns roaming around amid brightly painted walls. However, there are a few unique scares in this maze, including a creepy body bag room with a special surprise. This maze also uses a variety of scare techniques, such as drop panels and distractions. We were happy to see that they don’t rely on the “monster around the corner” type of scare. The actors were giving it 100%, and many were acting truly demented. Although it was the pretty standard circus/clown theme, we did see Billy from Jigsaw riding a tricycle in this maze. Although that was super creepy, it didn’t really fit the theme very well.

Immediately after 3D Mayhem, we entered The Uprising. In this attraction, a virus has turned the infected into zombies. After going through 3D Mayhem, we were expecting a generic zombie maze, but we were pleasantly surprised by the quality of the sets and the scares in this attraction. This maze was packed with actors, and like 3D Mayhem, they were going all out to scare us. The actors were great at contorting their bodies into supernatural creepy poses, and one zombie who crawled around on the ground was particularly disturbing. The makeup on the actors was also impressive. The maze takes you through various sets, including outdoor and indoor scenes that are pretty well constructed with a lot of detail. Zombies grab at you through the windows and come at you from all angles. Overall, this maze had good pacing, great actors, and good sets. It’s a very solid attraction. 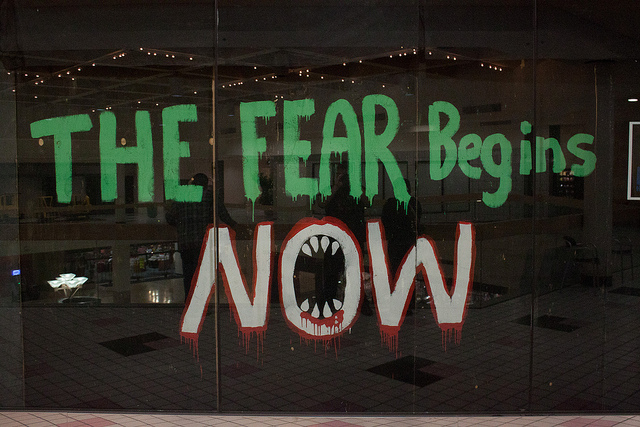 There were no lines on the night we went, but we’re sure it will get busier as it gets closer to Halloween. The ticket price ($19.95) includes admission to both attractions; you enter the second maze immediately after you finish the first. Although we didn’t attend last year (2010), their Web site indicates that it’s “entirely new” this year. The Web site also says that they have two 3D mazes, but only 3D Mayhem is in 3D; The Uprising is not.

Overall, Fear Overload is a pretty good mall haunt. Although 3D Mayhem felt a bit too generic, The Uprising was really good and definitely worth the admission price. After we went through the mazes, an employee (who might have been the manager/owner) stopped us to ask how we liked the mazes. He was truly interested in our honest opinion and wanted to know what we liked and what we didn’t like. During the conversation, a couple of the actors also came out to ask how we liked it. They had no idea we were with a haunt Web site–it was a slow night and also their opening weekend, and they seemed like they just wanted to give their guests the best experience possible. This dedication to improving their haunt really impressed us. We have no doubt that their haunt will continue to grow and get better year after year. We hope that you’ll check out Fear Overload if you’re in the Bay Area. 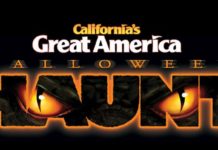