Bonnie Springs Ranch is an old Western town outside the Las Vegas strip that features a replica of an authentic 1880s Nevada mining town.  Originally built in 1843 as a stopover for the wagon trains going to California down the Old Spanish Trail, the ranch is now a year-round tourist attraction. Looking similar to Knott’s Berry Farm’s Ghost Town, during October, Bonnie Springs is transformed into Bonnie Screams, a ¼ mile haunted town featuring three haunted houses, a haunted trail, haunted train, street performers, and food.

During our recent trip to Las Vegas, we had only two nights to take in all of the local frights. Going to Fright Dome left us with only one night to see the other 6+ haunts that we found in the local area. We prioritized our list based on the number of mazes, price, and perceived reputation. This placed Bonnie Screams at the top of our list, so we bravely drove out 30 miles, in the dark of night, down a winding road into the middle of the Nevada desert. This drive alone built up our anticipation of what possible terrors await us. 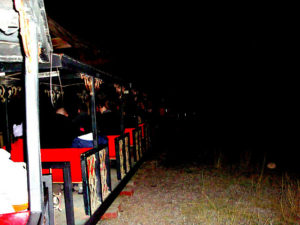 When we arrived, we parked in the gravel dirt lot and found an unassuming ticket booth in front of a small train station. We were fortunate as there was a group of 19 purchasing tickets who needed at least one more person to get a $5 group discount, so we joined them and bought our tickets for $20 vs. the usual price of  $25. After buying our tickets, we were sent to the arriving miniature train, which takes guests out to the ghost down. This was a very fun way to start a haunt experience; with the chill air and moon reflecting off the walls of Red Rock Canyon, we really felt as if we were being transported out to our doom. Along the 5-minute ride, two monsters hiding in the desert bush attempted to scare us as we rode by. While we weren’t startled, we liked that they were trying to scare us before we’d arrived at the main event.

The train pulled into a station in front of the ghost town and inside we went. The town was dimly lit with spooky music playing and monsters banging on trash cans, startling guests as they walked by. At this point we were excited as it seemed we chose one of the best haunts to see in NV. We made our way to the back of the ranch and lined up for our first maze, Slaughter of the Swines. This is when the real horror began; the horror of discovering that we were at one of the worst, make that shittiest, haunts in America!

There were less than 50 people in line ahead of us for Slaughter of the Swines, but the wait took over an hour! As we waited, the line behind us grew immensely, and even though they had a low-rent Halloween music and lights show every 10 minutes on the ghost town facades and talented fire eaters, the wait quickly became frustrating for everyone. They were sending in very small groups of people inside the maze every three to five minutes. We’re all for spacing between groups in haunts, but 5 minutes?! And with a crowd growing obviously impatient with this very poor practice. When we asked the one woman who was managing the line what the hold up was, she said the maze was very long and that’s why the wait is long. Speak about an illogical statement! Longer mazes should have higher capacity and therefore move faster. We started to suspect that this was one of those bad mazes with only one or two monsters inside who run around trying to scare people over and over. When we finally got inside, we discovered that we were right. This maze is supposedly “inspired by” the movie The Strangers, but the only correlation we saw was the guy wearing the sack mask. Maybe it was really supposed to be Friday the 13th because the other guy had a Jason mask on.

This maze isn’t even worth writing (or reading) much more about, but we were amazed at how terrible it was. We’ve been to community center and yard haunts that are much scarier than this smoldering heap of swine shit. Not a single person in our group of 6 screamed once, and after the anti-climatic finish with the sack head guy trying feebly to start up a chainsaw as we walked by, we were all shaking our heads wondering what the hell did we just waste over an hour waiting for. Furthermore, this “long” maze took us less than 3 minutes to walk through, and we discovered that they were in fact just letting in one group in at a time, waiting for that group to finish the entire maze before they sent the next group in. 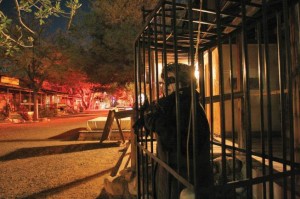 At this point  we were upset but made our way to the Maze of Mayhem. This line was “only” 20 minutes long and when we entered the maze and began walking down an outside pathway covered by only black plastic tarps,  we quickly learned that once again we were bamboozled. This maze took the fuckery to an even higher level, as we were stopped in the middle of it to wait to go into some haunted room. Yes, that’s right: this maze had a second line in the middle of it! We tried to bypass the room and get the hell out of Dodge, but the setup had us trapped, so we waited along with all the other irritated patrons to go inside. The even stupider part is we could see in the windows and saw the people inside just standing there while some old lady spoke to them. When it was our turn to go in, literally 20 of us said we were all together just so we could get the shit over with. The old lady walked around and talked some incoherent mess about a skull she called “uncle” while she pointed out some low-budget Halloween store–quality clown props. Nothing scary happened inside the room, and afterwards we walked back outside only to encounter another dumbass who couldn’t start a chainsaw on cue.

That was it! We couldn’t take anymore, and had already wasted too much time and money at this poor excuse for a haunt, so we skipped the Wicked Wax Museum maze and left. In order to leave, we had to walk down the Trail of Doom. The “Trail of Doom” appeared to be nothing more than a path alongside the main road and seemed to be a ploy to get people to walk back to the parking lot rather than loading them on the train. We heard other people who were leaving because they felt pissed off and ripped off. There were two monsters on the trail (who couldn’t scare a baby) whose failed efforts to “get us” was pathetic and embarrassing.  We suspect that they’re glad they had on masks so people wouldn’t know who they really were, being involved with such a sad haunt.

We’re sure during the day and through out the year Bonnie Screams is a nice place to visit. We don’t know if this was a bad night and how previous years were, but we will never go back to Bonnie “Scams.” Our job is to review haunts, so we whole-heartily warn all our fellow haunt stalkers not to bother going to this place… ever! 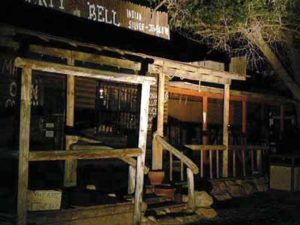