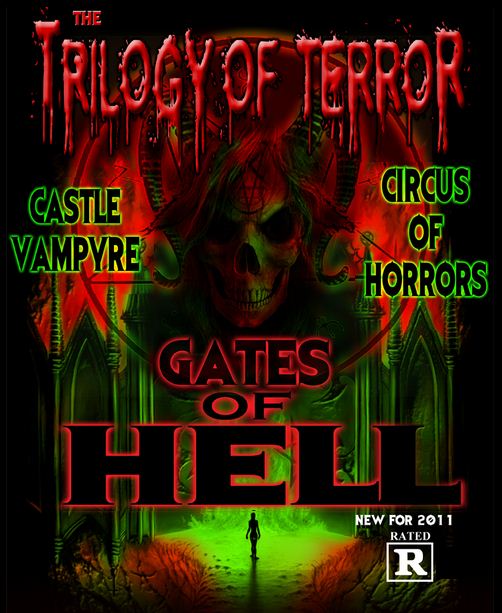 A few miles north of the Las Vegas strip, we pulled into the nondescript parking lot of an unremarkable suburban shopping center. The three attractions of the “Trilogy of Terror” were set up in a U-shaped formation. We made our way to the ticket booth and paid $27 for all three attractions. It was early in the night, and the lines were pretty short. The paintings on the facades of the mazes were cool but a little basic. There were some fog machines going, and even one of those colored spinning lights favored by low-rent DJs. We’ll admit that we didn’t think it looked completely awesome from the outside. But as anyone who’s watched a horror movie should know: you shouldn’t be fooled by outward appearances; the real evil is never what you expect.

We’ve been going to haunts for 20 years. We’ve been through  a lot of mazes/haunted houses/walk-through attractions. And we can easily say that Freakling Bros. Trilogy of Terror in Las Vegas contains the three craziest and scariest haunted attractions we have ever experienced. 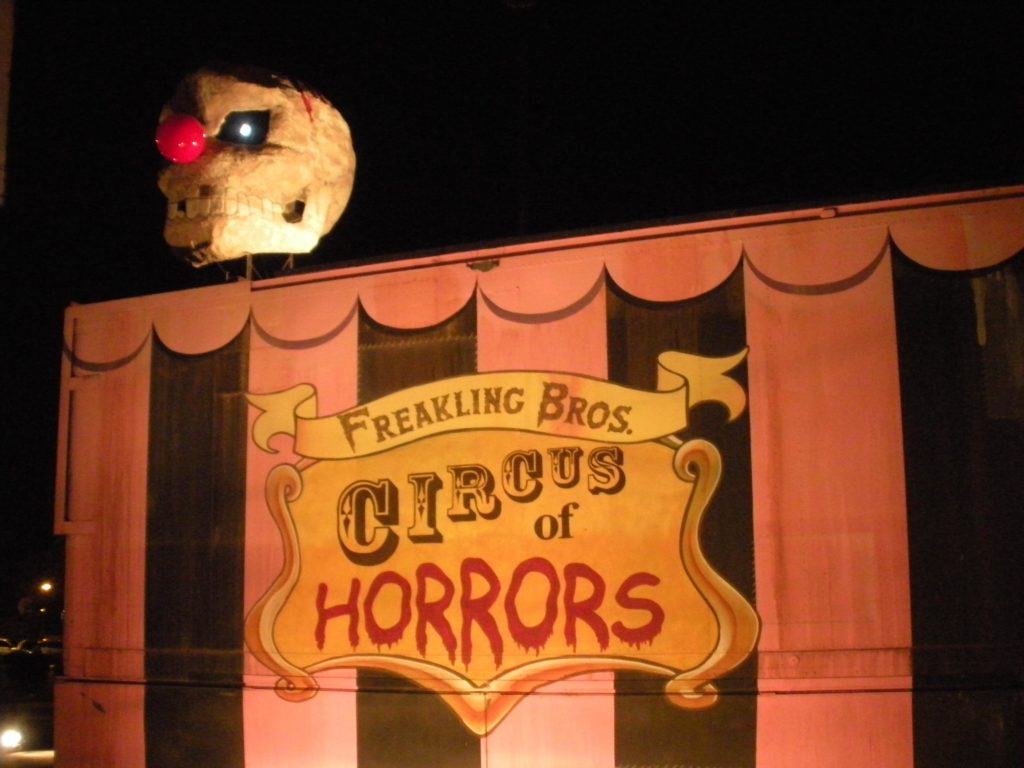 The show really starts in the line, as a freaky clown takes your ticket while an evil ringmaster looks on from the steps above, deriding the clown and threatening him with violence for being too nice to the customers. It was an entertaining but subtle act, and it instantly reminded us of the movie Fun House, which fit in perfectly with the circus haunt. Only small groups are allowed inside at a time, although it’s timed well and the line does move (unlike the lines of torture at Bonnie Screams). While in line, we watched people exiting the haunt–some were running, some were screaming, but they all had a huge, dazed smile on their faces that told us something crazy was going on inside. We even saw two groups leave the maze through the Chicken Exit. It had been a long time since we’d been in an attraction like that, so it really started to get us amped up and curious about what was inside. 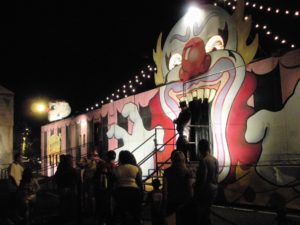 Before entering the maze, the Ringmaster drew us close together and told us the rules (typical stuff like don’t touch the actors or props, etc.). Once inside, we found ourselves in a room with a couple of freaks and no exit. Immediately, we sensed that this was going to be a different type of attraction, not the standard type where you just keep walking, pushing your way from scene to scene through shredded curtains. In fact, in many of the rooms, you have to open doors yourself or wait for something to happen before you can proceed. Needless to say, this really increases the suspense. We feel that it would be a felony to spoil the amazing scares with too much detail in our review, so we will keep it general. What you will not find in this attraction are black-light gimmicks, clowns with chainsaws, frenetic circus music, and silly 3D effects. The Freakling Bros. have mastered the art of lighting only what they want you to see. This maze has doors that open by themselves, a crazy room with inflatable balls that you have to actually pick up and move out of your way in order to get through the room, and a particularly suspenseful and ingenious ending involving “feeding the beast” that had us screaming and laughing like crazy. There are extended interactions with a some of the actors, all of whom were top notch. We exited this attraction breathless from screaming so much. We thought, “That must have been the best one of the three. Nothing could top that.” Boy, were we wrong. 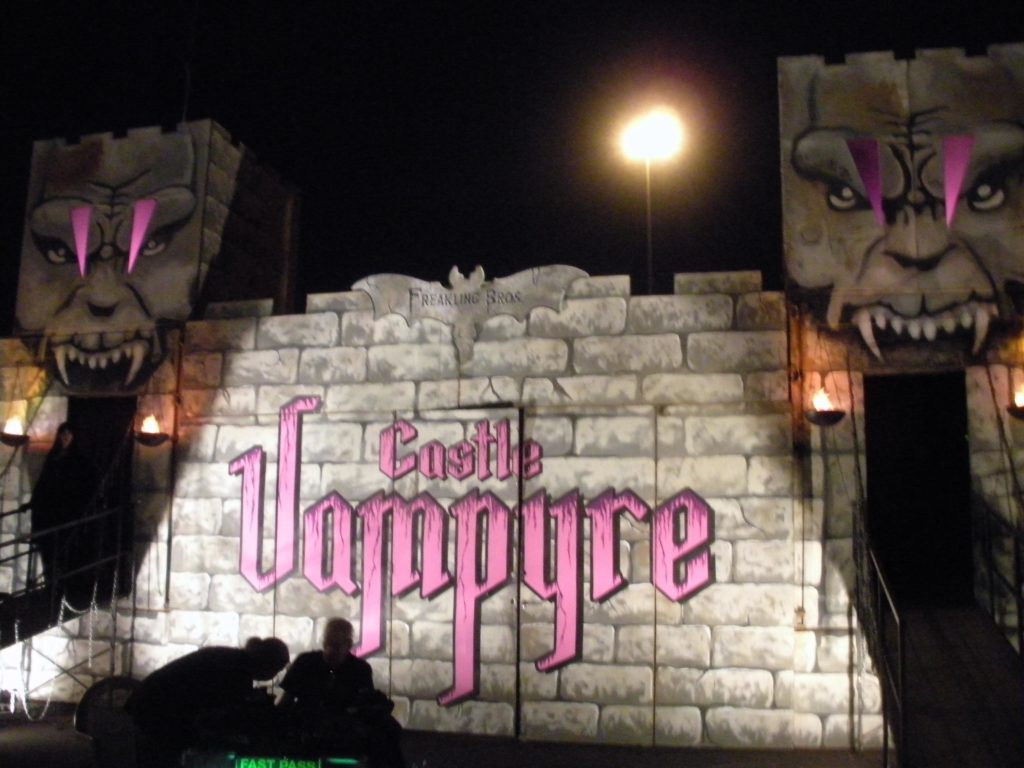 It’s hard to make a vampire attraction scary. Vampires are just lazy, narcissistic zombies, who spend their immortal lives making their castles look fancy. But not in Castle Vampyre. After waiting in a longer line and watching yet some more people leave through the Chicken Exit, it was our turn and we were again given the spiel about not touching the actors, etc., and let inside. Inside, it did look like an old castle. The mood and lighting were set perfectly. The monsters came at us from all angles–under the floor, behind the walls, out from the ceiling. In a dark passageway, a creepy hand seemed to float out from the wall right in front of our faces. Although it never seemed that there were too many monsters in any of the mazes, we were amazed at how the scares seemed to be nonstop. This maze had some unique setups, including a room that at first appeared to contain only 2 mirrors on the walls. It was only when you stepped in front of one of the mirrors that you realized it was actually a doorway you had to step through, not a mirror (and so, like a vampire, you don’t see your reflection). This is an example of how well the Freakling Bros. manage to make you disbelieve everything you see, which leads to disorientation and a huge amount of suspense.

Another room had no way out, and the ceiling started to close in on us. We literally had to crawl our way out of a door that finally opened on its own. This maze also had one of the craziest things we’ve seen in a haunt: a vampire who flies above you and straight at you. 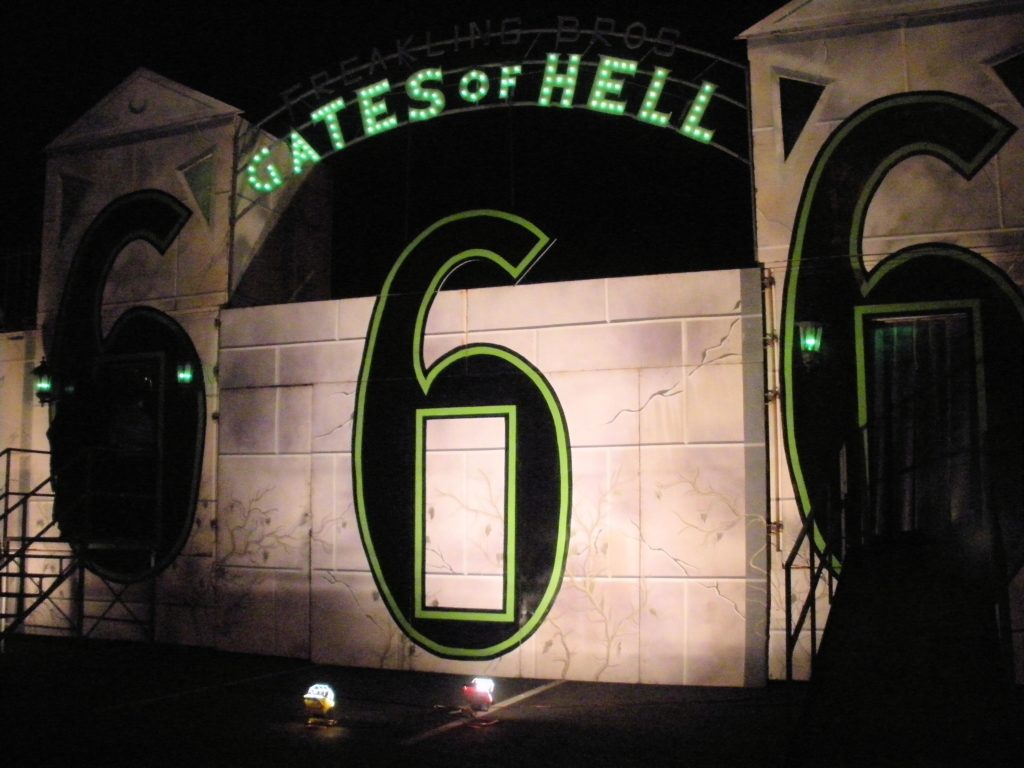 This attraction is “Rated R,” and no one under 17 is allowed inside without a parent or guardian. When we read this on their web site, we thought it was probably just hype. But after going through the first two attractions, we actually were nervous about going inside this one. We couldn’t imagine how it could be more extreme than the first two, both of which had us screaming the whole way through.

In line for Gates of Hell, they make you sign a waiver. This waiver says, among other things, that you will be touched and hear offensive language, and you agree not to retaliate. The waiver also mentioned that people with claustrophobia and asthma should not go inside.  We hesitated only a moment before signing. Again, we drew in close to hear the warning spiel, this time from the Grim Reaper himself. Only this time, he warned us that we would be verbally abused and touched. “What the hell is going on in there?” we thought. But we had no time to worry, because we were quickly ushered inside.

We were greeted by a shirtless guy in a gas mask who tells us to follow his directions if we want to survive. He then separated us and put us into tiny “lockers” and shut the door. This is obviously where the “claustrophobia” part comes in. This part does go on for a bit, so if you are claustrophobic, or even just nervous in the dark, your anxiety levels probably will go sky high. But it’s over soon enough, and we began to make our way through the maze.

The attraction takes you through various scenes of horror–suicides, murders, grizzly and bloody scenes. Beware of the dead, because they are likely to suddenly come back to life. There are also passages of complete darkness. Most disconcerting was the lack of music in this haunt–it was replaced by the sound of a busy signal from a telephone, sometimes interrupted with a classic telephone ringing. You may not think this sounds scary, but the sounds were jarring and unexpected. And if you think about it, what do you feel when you hear a telephone ring? Anxiety, because you’ve been conditioned to want someone to answer a ringing phone. It’s so subtle, but effective.

Again, the scares were nonstop in this attraction. People did grab us–our feet, arms, shoulders. In some scenes, the actors pushed us through doors or physically blocked us from moving forward. The “verbal abuse” occurred in only one scene and was not too shocking, but the scare was excellent. Finally, at the end of the maze, we met a woman who prepared us to face Satan himself. But she had a “shocking” surprise that had us screaming for mercy.

We were completely blown away by the Trilogy of Terror. Each attraction was better than the one before it. We recommend visiting the attractions in the order we did: Circus of Horrors, Castle Vampyre, and then Gates of Hell. Although the sets inside were detailed, they of course don’t reach the level of, say, Halloween Horror Nights. But theme park haunts surely have budgets many, many times greater than the Freakling Bros. Nevertheless, we were very impressed with the level of detail inside. We also think that the scares are more intense and better executed than any other haunt we’ve ever experienced. These attractions are long and truly terrifying. We can definitely see why some people left through the Chicken Exit.

You may notice that the scare factors for these haunts have gone off our typical 1 to 5 skull rating scale. Freakling Bros. is the first haunt to earn a 666 skull rating from Scare Zone! We hope that you will plan to visit this amazing haunt. Freakling Bros. made our entire trip to Las Vegas worthwhile.