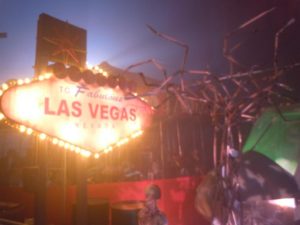 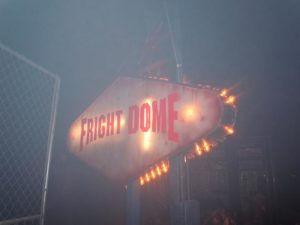 We were very excited when we heard that this year, Fright Dome would be the official home of Michael Myers. As many of our Haunt Stalkers already know, Mr. Myers is one of our favorite horror icons, and we really loved the 2009 Halloween maze at Universal Studios Hollywood’s HHN. We weren’t necessarily expecting Fright Dome’s two Michael Myers–themed mazes to be at the same production level of HHN, but we had heard (or at least saw the marketing) that Fright Dome offers one of the top haunt productions in the country. So with the promise of being terrorized by Halloween’s most vicious Trick O’ Treater at one of the country’s top haunts in Sin City, how could we not make the trip to experience Fright Dome firsthand?

Upon arrival in Vegas, we found Fright Dome was being advertising everywhere, with billboards, taxi toppers, and ad trucks cruising the strip. There were also special television appearances by former Halloween cast members on the local news stations along with radio promotions. There was no question that Michael Myers was in town! All of the promotion further increased our anticipation, and it seems that it was effective as we would end up going to the most crowded Haunt we’ve ever been to. 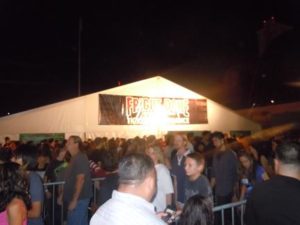 When we arrived at the Circus Circus hotel, we encountered a gridlocked driveway into the parking lots. In addition, there was a long line of people that extending along the driveway. After navigating through the crowd and some (rude) police officers who were acting as if they’d rather have desk duty, we parked and got into line. This is when the fun really began . . . to stop. The primary line to get through security took 40 minutes. If you purchase your tickets online, you can bypass the general security line; however, the cops won’t let you cut through until you’ve reached the front of the ticket sales tent, so you get to wait along with the rest of the minions. You also can’t use any of the discount offers for online ticket purchases.

After going through security, those with pre-purchased tickets can go directly inside the Fright Dome. Those foolish enough not to buy them online, like us, will be subjected to at least another 40-minute line. Keep in mind that they hide the lines in tents and have no signs about the wait time, so it’s difficult to assess how long you’ll be waiting (we would have left had we known it would take over an hour just to get in). Feeling we didn’t want to cut our losses yet, we stayed in line and finally got to buy our tickets. The one benefit of waiting was that we got to use a buy-one, get-one free coupon we found on the ground.  We also upgraded our tickets to the front-of-the-line passes as we couldn’t take waiting in lines any longer.

Once we made it inside the Fright Dome, the real terror began, as we were faced with a dark and crowded sanctum filled with screaming children, the Children of the Dome.  If you want to know where parents stash their children in Las Vegas, this is the place. We’re accustomed to attending haunts that have a multi-generational appeal and audience, but we felt out place in this giant arcade where the average age appeared to be 14 years old. It seemed as if the kids were more interested in the rides and video games than the haunt offerings, and many were even too young to be familiar with the Halloween movies or the recent remakes. With the congested walkways, poor lighting, and confusing directional signs, we literally had to go through mazes of people (children) just to get to the mazes. We’re not sure what the capacity level is for this place, but it was beyond the limit of being comfortable, and we couldn’t imagine it being safe had some kind of disaster occurred. 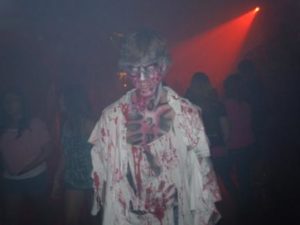 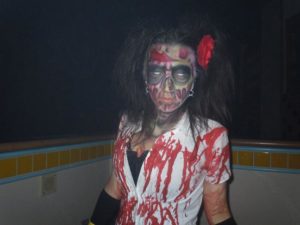 We do have to give credit for the excellent makeup jobs on many of the roaming scareactors and some of the standalone scenes set up through out the Fright Dome. We also acknowledge their partnership with  the sCare Foundation. However, we still have to review haunts based on the caliber of their mazes and our overall experience.

We use a 1-5 skull rating system and evaluate the mazes on design and scare factor. We do our best not to spoil the mazes for those who’ve yet to experience them, so we won’t provide scare-by-scare reviews, but we will share highlights and our overall opinions on the effectiveness of the mazes. 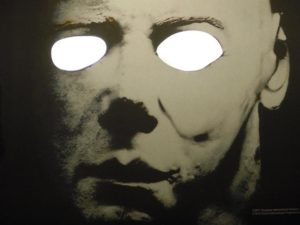 Halloween -The Home of Michael Myers: In this maze, guests get a one-on-one tour of the Myers home, where nosey trick-or-treaters have been sneaking inside giving the neighbors tours as it creeps closer to Halloween. Of course, what we soon realize is that the legend himself has returned home for the season. We didn’t care for the tour-guide element, which was used in nearly all the Fright Dome mazes. Having a tour guide takes away the feeling of being alone and discovering your way through the maze. This maze had a rather detailed opening scene with a cop car parked outside the porch of the Myers house.  However, this ended up being only one of a total four impressive scenes inside this entire maze. The majority of the maze had cheap black tarp walls with flashing strobe lights that significantly took away from the feeling of actually being inside a house.  There were a couple of unique scares, including the suspenseful dinning room scene where Michael is sitting at the table eyeballing everyone as they enter before he jumps up and goes after select victims in the group. We do have to give credit to the Michael Myers scareactors who did a decent job of stalking us in some of the scenes. At the end, we were confused by the Jeepers Creepers truck that makes an appearance in the maze (we didn’t know he and Mikey were in cahoots). Overall, this maze wasn’t very impressive and did not have the quality we’d expect from one of the “top 5 haunts in the nation.”  It also falls short of offering a unique Halloween movie-themed experience.

Halloween – Haddonfield Memorial Hospital: The maze begins in the Emergency Room, where we check in with the nurses before we end up in the  middle of the Psychiatric Ward of Haddonfield Memorial Hospital where Michael Myers is (was) being held. For the Halloween purist, you’ll note that Haddonfield Memorial Hospital was where they took Michael’s sister Laurie to recover in Halloween 2, and it didn’t have a psychiatric ward; Michael was actually held at Smith’s Grove Sanitarium in the movies. But, we guess most of the 10-years-olds wouldn’t notice this detail. The sets in this maze were even sparser than in the Myers home maze, with even more strobe lights flashing along sheet, chain link, and tarp walls. The Michaels in this maze were also of poorer quality compared with the former ones, as we saw Michael go from being short and slim to tall and fat in consecutive scenes.  The overall focus of this maze went away from being about Michael Myers and more about the “crazy people” inside who were more annoying than scary. 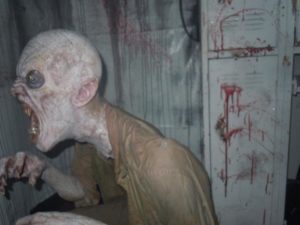 Fright High: The story of this maze is straightforward: zombie and monster students are running amuck through the hallways of a  dilapidated high school. This maze was almost as scary as going through Fright Dome’s pathways filled with the screaming teenagers.  The scareactors in this maze were also some of the best in Fright Dome, with some very good makeup effects. While there were some tarp-lined pathways with strobe lights, this maze actually had better props and sets than the Halloween mazes and was very long. Once again, we were stuck in a “tour group” walking through the maze, so we got scared only once or twice. 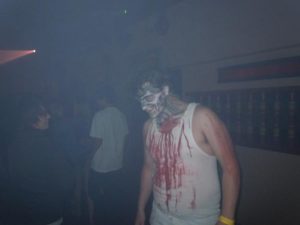 Hillbilly Hell: This is said to be ranked as one of the scariest haunted houses at Fright Dome. It may be scary if you’re 10. This is a typical cannibal hillbilly maze, where you venture through a taxidermy shop, butcher shop, and end up in the dining room of the locals. In this maze, our tour guide kept stopping in scenes, and due to the size of the group, not everyone could see or hear what was going on during the narration. This maze had some interesting props such as the grandpa blob and demon dogs, but once again, it was lacking scares. 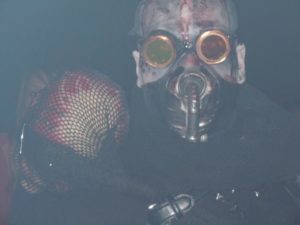 Chainsaw Massacre: Here we find chainsaw-wielding maniacs gone wild. This maze is billed as a Fright Dome favorite that most guests supposedly can’t make it through. We almost didn’t make it through either, not because it was scary, but because of the suffocating fumes from the chainsaws inside the maze. Even though it’s outside on the Fright Dome’s patio, we were concerned for the scareactors who had work in this maze all night breathing in these toxic fumes. In this maze, yet again, we’re walking down black tarp hallways with an abundant amount of strobe lights with a few set pieces scattered about, which basically consisted of turned-over trucks and cars. What usually makes chainsaws scary in a maze is the surprise element, but in this maze, the chainsaws are continuously running and therefore lack any kind of surprise scare factor. This was a disappointing end to a disappointing night at Fright Dome.