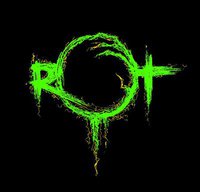 Sadly another season of Haunt Stalking is now over. During the last weekend, our final stop was at Reign of Terror (ROT) in Thousand Oaks, CA which ended up being  a very good way to close out the season. Last year ROT ranked as one of our top haunts for Best Sets/Props/Atmosphere and this year they managed to sustain their rapport of high quality haunt design while offering an expanded maze with more rooms and new scares.  With the return of the “The Haunted House” and “The Asylum” and the addition of a new segment called “Blood Manor”, ROT once again proved that it ‘reigns’ with high-quality set designs that make guests feel as if they’re inside a real haunted house.

We know that being repeat visitors to a haunt could diminish some of the scare factor as we have an idea of what to expect. So this year, we brought along a first time visitor to see how impressed and scared they were by ROT. As it would turn out, they were very much impressed and scared. Upon arriving to ROT we were greeted by the resident witch who welcomed us back and we also got to say hello to ROT’s creator, Bruce Stanton, who proudly welcomed guests as they entered the queue. ROT’s very elaborate pre-show line is still one of the best queues of any haunt we’ve been to; featuring weather effects, horrifying  props, and roaming scareactors. The line is akin to something you’d see at Disneyland and it also has a wait time similar to a Disney-line. The long wait can be attributed to the fact that they only let small groups in at a time to avoid lines from forming inside the house.  To bypass the long wait, we once again opted for the front-of-the-line pass which is an extra $7, but we found it to be worth it as the ticket proceeds benefit the local Teen Center and we’re deathly afraid of waiting in lines. 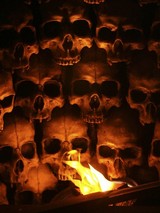 Given that haunt season has now passed we’ll describe in more detail some of the scares we encountered, or shall we say endured, while inside ROT. While it appears that no one is home, that will turn out just to be wishful thinking. The first scene places you inside the dimly lit and cobwebbed parlor entry of the house which features a fireplace, piano, and an old woman, looking like Mrs. Bates sister, sitting in a rocking chair slowly knitting.  The fun and scares ramp up in the second room where a seemingly dead woman is laying on a couch. We expected at some point she would spring to life, but she quietly lay, that is right until the last guests was about the exit the room and she then came to life scaring us all to death. For those of us in the front it was extremely suspenseful to walk past her in anticipation of her pending attack. This is just one of many examples of how ROT has mastered the ability to build up tension and sustain the suspense throughout the house. The timing of the monsters is always key to a good scare and they were able to keep everyone in the group on their toes regardless if they were in the front or back. There are some rooms, like the dining room and dark hallways where there were no scareactors present but we still apprehensive walking through these foreboding rooms.

Another great scare occurs in the kitchen where all seemed calm until a monster comes lunging out out of the refrigerator. This was the scare that had half of the group nearly down to their knees and throughout the rest of the house there were scares with monsters popping out of windows and from underneath beds or other furniture. They really go out of their way to ensure that the scares are not predictable with just a monster hiding around the corner. We did find a few of the triggered animatronic scares to the be off cue or broken down, but of course it was the end of haunt season so some wear could be expected.

The thememing inside ROT stays consistent as we ventured through just about every kind of room you could possibly inside a haunted house including closets, dining rooms, and bathrooms. The one thing that was hard for us to distinguish was the transition between “The Haunted House” and the new “Blood Manor” scenes but this may of been on purpose. Towards the end of the house there were some scenes with a lot of blood splatters and stains on the walls and furniture so we assume these were apart of the blood manor segments. 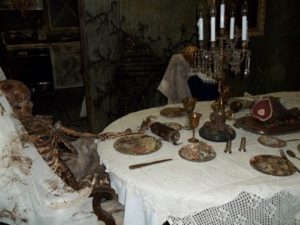 The transition to the “Asylum” maze is more poignant with a creepy “outdoor” scene bridging the transition to the Asylum. While we’ve grown a little tired of Asylum themes being used at haunts, ROT manages to keep it mostly scary. However, what tends to happen, and what we experienced here, is the scareactors who are portraying the “crazy patients and doctors” loose their scariness when they overact and start speaking too much. There’s a thin line between dramatic and corny and in a few scenes some of the them were just corny. It can be seen as a way to break up the tension, but we just like hardcore scares all throughout.

All in all, this was another great year for ROT. We’re glad to see that they’re continuing to build on the foundation they established as family yard haunt. Next year is supposed to offer an even longer house with more scenes. Given it’s permanent location, we would love to see them open during other non-traditional haunt holidays such as Valentine’s day. We also would like to see them open on more nights during haunt season as it was a challenge to get out see them when they were only open 2 nights a week and that may also help with the long lines. It’s obvious that this a popular local haunt and it’s well worth the drive from L.A.  to experience during the haunt season.