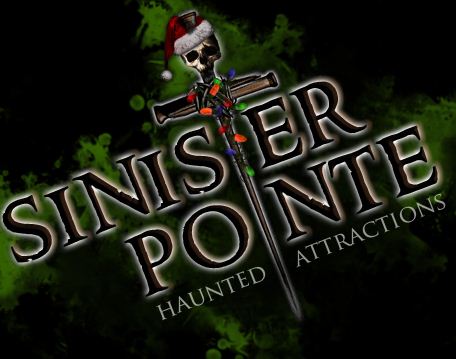 In 2011, Sinister Pointe secured a new, permanent location in Brea, California, and they promised us that in addition to being open for the Halloween season, they would open at other “select” times throughout the year for special events. They fulfilled that promise last weekend (December 9-11) by opening their doors for their first non-Halloween event: a “Not So Merry Xmas” haunt.

They did a impressive job of taking their haunt, which at Halloween time was a sort of hillbilly/slaughterhouse/cannibal theme, and transforming it to incorporate Christmas elements throughout.

As we approached the building, the exterior was lit up with red and green lights, and the 1964 claymation version of Rudolph the Red-Nosed Reindeer was projected onto a screen in the waiting area. A couple of scareactors dressed as satanic-looking elves roamed the parking lot, and a twisted Santa also sauntered around—drinking, smoking, and cursing.

Although the line was not nearly as long as during October, we still had a bit of a wait before proceeding to the inside portion of the queue. The movie being played in the line was a good distraction during this wait, and we hope that they add this during October, when the lines can get really long. The interior queue was also done up for the holidays, with Xmas lights strewn around and a Santa mannequin on the upper balcony. A demented elf on the balcony taunted us, made out with the Santa mannequin, and continually flipped off anyone trying to take his picture. He also made lewd gestures with mistletoe over his crotch area. We knew before we even entered the maze that this haunt was definitely Rated R and would have a different feel from the Halloween version. 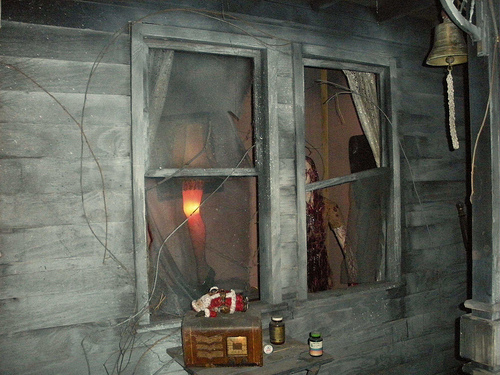 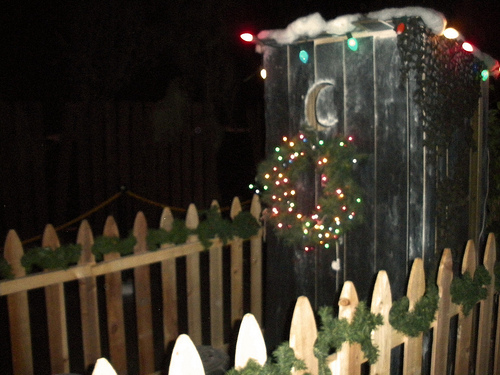 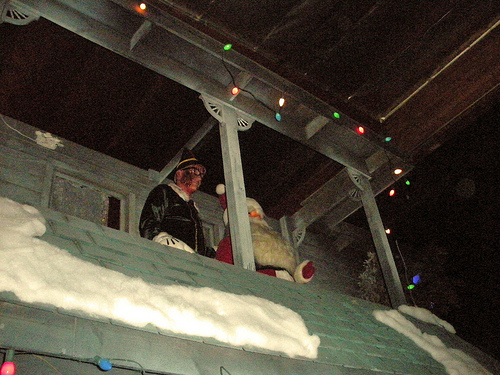 Upon entering the house, we immediately had our picture taken with creepy Santa, who actually did reek of alcohol. Drinking in the parking lot was apparently not just an act, and we were really impressed with this dedication to character. After the photo op, we entered the maze. Unlike during Halloween, when the house had a “choose your own adventure” theme, this version had only one path to follow.

Many of the scenes in the maze included Xmas decorations and theming. A creepy and cool Christmas soundtrack by Jon Autopsy set a sinister Xmas spirit. Some of the scareactors were dressed as bloody elves, and new for the holiday season was a perverted “bunny” character, who we think was meant to represent Ralphie in A Christmas Story. At one point we were trapped in a room with perverted Ralphie, who dangled a carrot in a very inappropriate, and hilarious, place. There were also a couple of interactive features in the maze, which were fun.

Overall, Sinister Pointe’s “Not So Merry” Holiday Haunt was fun, but not as scary as their Halloween version. It definitely had a more “adult” feel, with all of the sexual innuendos and perverted characters roaming around. Because a lot of the scareactors got right in our faces with their nasty jokes, this interrupted the feeling of suspense the maze usually has and distracted from the scares. However, we think that was probably the point. Sinister Pointe managed to take their haunt, which was open only a couple of short months ago, and completely change the feel in it for this special event. It changed from a super scary, unpredictable Halloween maze into a fun, over-the-top holiday haunt. Taking that approach was very smart, because in the end, we in no way felt like we were just going through the same Halloween maze with a couple of Xmas decorations thrown in. It really did feel different, which is very important if they’re going to successfully open their haunt at various times throughout the year.

Although we don’t use our typical “skull ratings” for off-season haunts, we would definitely recommend checking out Sinister Pointe the next time they open. Early rumors indicate that they may be open for a Valentine’s Day haunt. “Like” them on Facebook to keep up with all of the latest news.

For some amazing photos from inside Sinister Pointe’s Holiday Haunt, check out Westcoaster.net.