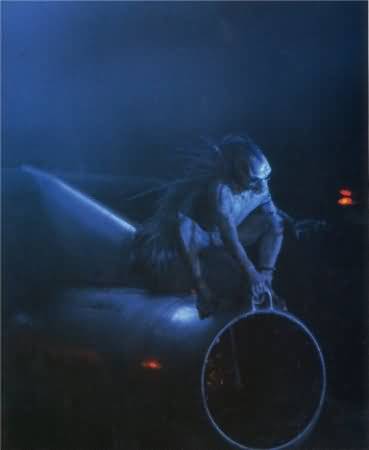 It’s a  new year so it’s time to start planning our 2012 haunt stalking. With the haunt industry booming, there’s going to be even more ‘scare-tivities’ to endure… err enjoy in the new year. Looking at our past experiences and the highly anticipated haunt events of  the new year, we’ve complied a list of 13 haunt destinations for 2012. So count up those frequent flier miles, put in for vacation time and keep your resolutions to set out on some terrifying travels. Remember this may be the last year any of us will get to haunt stalk.

3. TransWorld Haunt Show (March 8-11, St. Louis, MO): For the last 16 years, TransWorld’s annual Halloween & Attractions Show has been a “must attend” event in the Halloween & Haunt industries. This year is no exception! This is the only trade show that features vendors, from across the nation and overseas, that cover every aspect of the business, from ticketing to makeup and sound FX to giant animatronics. In addition, local St. Louis Haunts open their doors to attendees. If you are a pro haunter (want to become one) or a True Blood haunt stalker, you cannot afford to miss this event.

4. Monsterpalooza (April 13-15, Burbank, CA): This is an annual convention featuring Hollywood’s award winning FX Artists, Monster and Horror related art work displays, presentations and special guests from horror and Sci-Fi. For us the highlight is the Walk-thru Monster Museum!

5. HauntCon (May 3-7, Monroeville, PA *Pittsburgh): We attended this event last year and believe it’s worth a visit if you’re a haunter or stalker living on the east coast. This is the first year HAuNTcon will be in a convention center rather than a hotel in Monoroeville, PA which just happens to be next to the Monroeville Mall, most famous for its appearance in the George A. Romero horror film Dawn of the Dead.

6. Midwest Haunters Convention (June 8-10, Columbus Ohio):  This is the largest Halloween show of its kind in the US serving a primary audience of Haunted Attraction Producers, Actors, Artists and Home Haunters.  It provides regional businesses and residents the opportunity to shop for professional quality Halloween related products along with educational seminars and workshops and networking activities for haunted attraction industry professionals. Of course, the main reason to go is for the world’s largest haunted attraction bus tour.

7.  Tides of Torture (Dates TBD): We know that seeing Kathie Lee Gifford in a bikini could be scary enough, but this Caribbean cruise promises even more terrors at sea. This cruise convention will feature a Fangoria-sponsored film festival and some of your favorite horror actors including Jason actor Kane Hodder who really enjoys being on a boat.

8. London (UK) Haunts: Last year our friends at Theme Park Tourist shared some great reviews of the UK haunts and with the 2012 Olympics taking place this summer in London we highly recommend the trip over the bloody pond to experience their renowned year round and seasonal haunted attractions.

9. New York Haunts: We now know why this is the city that never sleeps. It’s because everyone is having nightmares! NYC boasts some of the nation’s most extreme haunts and offers haunts in unique metropolitan locations all the way out to the dark woods of Sleepy Hollow in upstate. This is a “not to be missed” destination during the fall.

10. Pennsylvania  Haunts: While in NY, you might as well head down to PA as well. Pennsylvania is home to some of he nation’s most highly rated haunted attractions including; Jason’s Woods, Bates Motel, and Field of Screams just to name a few.

11. Texas Haunts: Texas is a big state which provides a lot of room for haunts. Throughout the year and especially during haunt season Haunt Stalkers can find a haunt (or two or three…) in nearly every town with the Dallas-Forth Worth area and Austin leading  the terror with their renowned haunts such as Cutting Edge, Hangman’s House of Horrors, and House of Torment.

12. Central Florida Haunts: If you’re a fan of haunts and Theme Parks then Central Florida is the destination for you. While there are only 2 major haunts, Universal Studios Halloween Horror Nights and Howl O Scream at Busch Gardens; these 2 offer more than enough mazes and scares to make for a satisfying trip.