After much speculation (and obvious to those of us who’ve been following closely), Universal Studios officially announced today that AMC’s The Walking Dead will be joining Silent Hill as a featured theme at Halloween Horror Nights in Hollywood and Orlando. When we hear The Walking Dead and HHN in the same sentence, we bitingly think of the enormous crowds and lines that both parks draw in year after year . . . but we digress. The Walking Dead will actually let Haunt Stalkers experience the horror of AMC’s blockbuster original series in elaborately themed, haunted mazes and marks the first time that a television series has joined HHN on both coasts.

The Golden Globe–nominated, Emmy Award–winning series The Walking Dead is based on the comic book written by Robert Kirkman and published by Image Comics. The series tells the story of the months and years following a zombie apocalypse. It follows a group of survivors, led by police officer Rick Grimes, who travel in search of a safe and secure home. Universal Studios’ Halloween Horror Nights’ creative teams are working with AMC and The Walking Dead to create an authentic experience that is true to the Emmy Award–winning hit series. The haunted mazes on both coasts will feature eerily authentic, elaborately designed, movie-quality sets that include some of the most iconic locations and scenes from the show. Mobs of undead walkers bring to “life” the vicious, hungry zombies from the show. 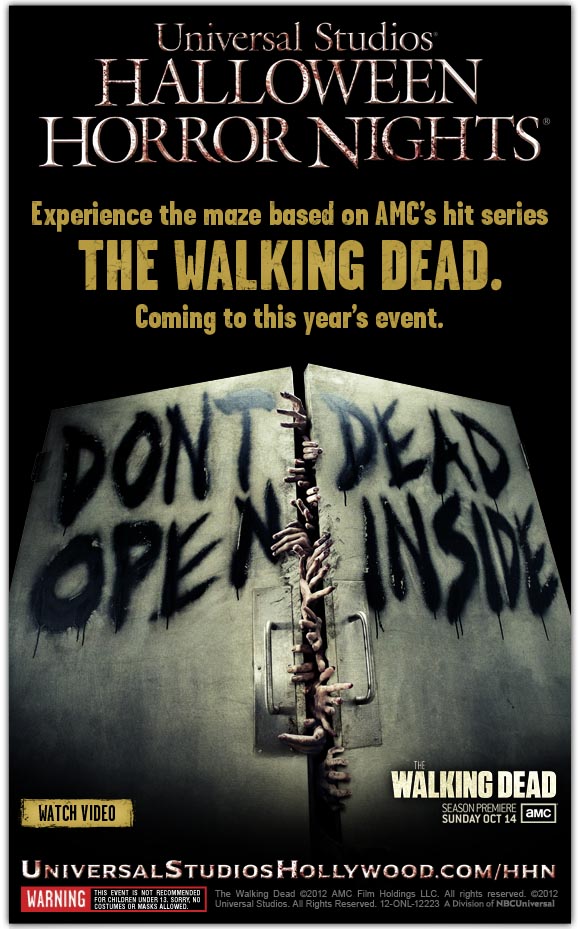 More details about the official announcement and an interview with John Murdy, creative director of HHN Hollywood, and Gret Nicotero, co-executive producer of the Walking Dead, were revealed by Jim Hill Media.

The mazes will feature scenarios from seasons 1 and 2 of the show, and will begin in the the hospital where Rick wakes up from his coma, a scene featured in the pilot episode. Other scenes will include the swamp and the campsite. We’ve also seen photos of a barn being constructed for the Orlando maze, so we know one scene will include the barn. HHN is also using the original molds from the show to create the makeup pieces, so characters in the maze will look exactly like those on TV.