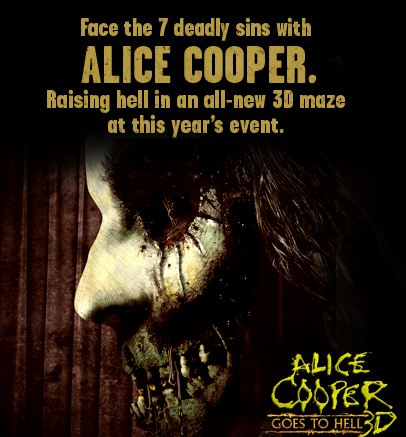 With very little surprise to us, it was announced that Alice Cooper will be returning to this year’s HHN in Hollywood with a “new” maze called Alice Cooper goes to Hell 3D. It seems that the trend is for horror rockers to get a 2 year gig at HHN Hollywood. In addition, HHN Orlando will also be getting a Alice Cooper themed maze, Alice Cooper: Welcome To My Nightmare, which was the title/theme of last year’s HHN Hollywood maze.

Last year, we were initially skeptical about the Alice Cooper maze but we actually ended up really liking the Alice Cooper:Welcome To My Nightmare as it was fast paced with consecutive scares and offered a great amount of surprises. in fact, we found it to be scarier than Rob Zombie’s House of 1,000 Corpses 3D.  It sounds like with this year’s version they’ll probably be combining elements (meaning recycled set pieces)  from last year’s Alice maze and the former Rob Zombie 3D maze. We’re curious to see how different the the Orlando version will be compared to Hollywood’s versions.

There seems to be a great deal of synergy between Hollywood and Orlando this year. Of course, it has to be the year that Scare Zone is planning to visit both that they decide to have numerous similar themes. The last time they shared numerous themes was back in 2007, which was our last trip to HHN Orlando. For us, this is somewhat disappointing and we truly hope, that after this announcement there are NO MORE similarities. Of course, this year we also realize that HHN is most likely only going to offer 6 mazes which would also be the same number usually offered at HHN Hollywood; excluding Hollywood’s Terror Tram which could be considered a 7th “maze.” Also, one of Hollywood’s mazes includes a thematic overlay of  the tired, year-round haunt, House of Horrors.

In the meanwhile, we’ll remain optimistic that the next  maze announcements will be exciting and unique for both parks.