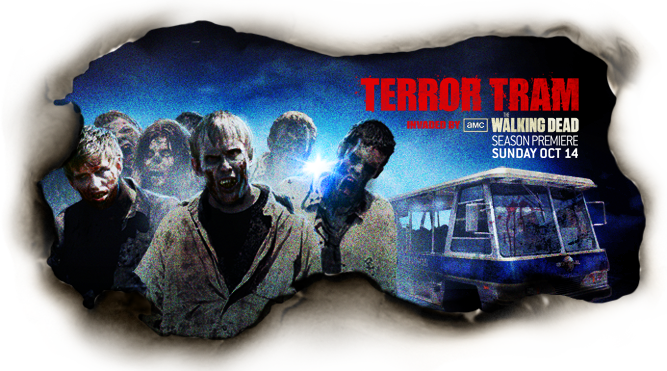 With little surprise, the Terror Tram is returning this year as Terror Tram: Invaded by the Walking Dead. To us this isn’t overly exciting news but for others this may be what their nightmares are made of. Over the years, for repeat haunt stalkers like us, the Terror Tram has become a flat lined attraction. The one exception may be in 2009 when they expanded the layout with the Halloween (Michael Myers) and My Bloody Valentine overlays.  In spite of having different themes the Terror Tram always ends up being the exact same experience year after year. Instead of  Chucky or Ghostface, this year we will have zombies roaming around the Bates Motel, the backlot hillside, and the War of the Worlds set. Unless they situate it in a new location it will be the same as always except, perhaps, for the corny video they play as the tram descends from the park into the back lot.

From an operations standpoint the Terror Tram provides Universal with big “people eater” attraction that helps to alleviate the crowd flow throughout the park. Yet it also has given Universal some headaches as the location on the studio back lot has garnered them many complaints from those pesky neighbors who expect to have (start sarcastic tone) continuous dead silence every night, after they bought their homes next to a movie studio/theme park. Therefore, on Sunday and Thursday nights, the Terror Tram has had to close at 9 which actually minimizes it’s people eater impact.

To be fair, we’ll hold off on any further judgments as in less than 2 months we can experience it for ourselves and if anyone can make something really scary, it’s HHN. So we’ll see.