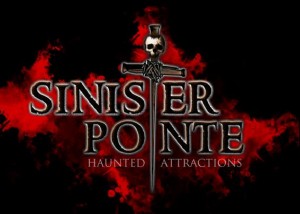 Since moving to a new, permanent location in 2011, Sinister Pointe has billed itself as “Southern California’s only year round and permanent attraction.” Although the maze is not open all year, they do open it for several special events/holidays (e.g., Christmas). This is great for haunt stalkers looking for an off-season fix, but one of the challenges for the Sinister Pointe team is keeping the maze fresh and new in order to bring back the crowds during the main season–Halloween. In fact, with a full haunt itinerary, Scare Zone even debated whether it was worth returning to Sinister Pointe this year, because we were skeptical that they would be able to change it up enough to justify the trip out to Brea. But in the end, we were very glad we did decide to check it out, because Sinister Pointe has managed to reinvigorate their maze with exciting new scenes and scares.

We attended the haunt on opening weekend and arrived right at opening time. We were happy to find there was no line yet.

The waiting area was lined with booths that will be selling various Halloween-related wares; on busier weekends, Sinister Pointe also brings in food trucks to feed the crowds.  After waiting a short while outside, we were let into the indoor holding area. This is a highly themed queue with fog and lighting effects, and actors build up the suspense by scaring people as they wait for their turn to enter the front door of a dilapidated house. 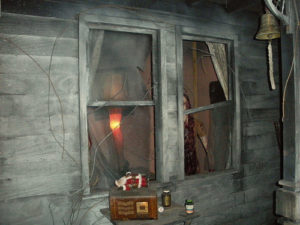 Once inside the maze, there is a photo op area. However, on the night we attended, it was not operational, so we were allowed to proceed directly ahead. The maze itself is themed to a sort of cannibal hillbilly house, with deranged rednecks and other similar characters.  The sets are highly detailed and themed, and there’s a lot to look at. The actors take advantage of these distractions as they come at you from the shadows and behind walls and sets. The maze is also “interactive,” meaning that you will be asked to perform specific tasks before the door will open to the next scene. At one point, the maze appears to be a dead end with no way forward, but somehow, you get turned around and the path seems to have changed. Other impressive effects include a room with swaying walls and an optical illusion involving a long hallway.

For 2012, Sinister Pointe has made some really cool additions. Most impressive was a new “outdoor” scene (although it was completely within the indoor maze) of a porch surrounded by water. You have to proceed over a series of bridges to get to the front porch, where an old man is taunting you. Of course, there was also something lurking in the moat, so we couldn’t linger too long to enjoy the new set. Another addition is a new interactive scare near the end of the maze that involves pulling ropes. In addition, it seems they have added some actors with longer speaking parts who interact a bit more heavily with guests.

Once again, the monsters in this maze were full of energy and highly athletic. We have a hard time finding any other actors who match the level of dedication and gusto of the Sinister Pointe actors. They also work together really well to team up and double the scares. Although we’ve been through several variations of this maze in the past year, the actors still managed to surprise us, and we were screaming throughout.

Overall, Sinister Pointe has done a great job updating their attraction for the 2012 Halloween season, and we highly recommend a visit, even if you’ve been through at some other point during the season.