Since 2010, when the Queen Mary completely made over their Halloween event (previously known, appropriately, as “Shipwreck”), Dark Harbor has been one of our top-rated haunts. In 2011, the haunt was very much the same as the year before, adding only small upgrades to the mazes, but not otherwise changing much. So we were glad to hear that they were adding a brand new maze for 2012 as well as replacing their old siren character with new monsters based on the actual stories of ghost sightings aboard the ship. The new maze and the new monsters serve the event well and further help to tie in the extensive nautical theme that permeates the haunt. 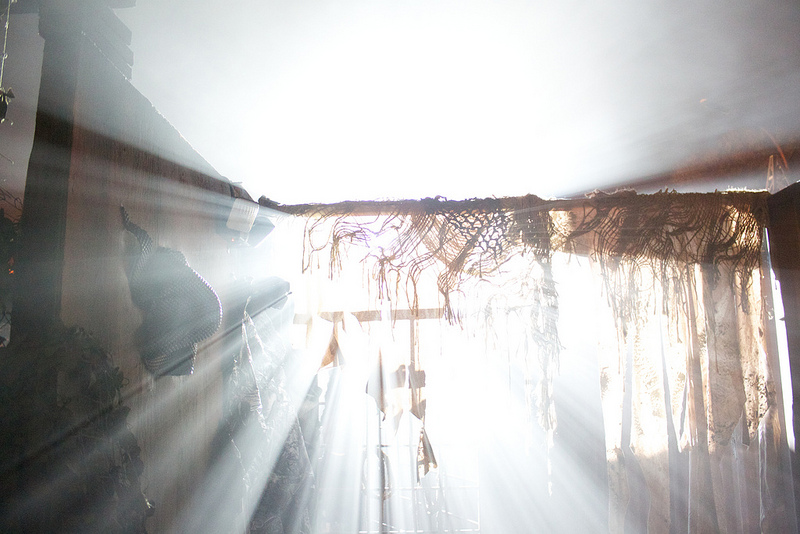 Before we get to the individual mazes, it’s worth mentioning that the elaborate entrance tunnel, which was sort of a maze in itself for the past two of years, has been partially removed. Although we loved the previous entrance, the additional maze and new layout of the grounds seem to be good replacements.

The wreckage of Deadrise has once again been called into service by The Captain to escort him and his army of super ghosts and monsters into a battle against the living to reclaim Dark Harbor. As you walk through the carnage of the maze, beware… the undead are ready to fight for your soul. 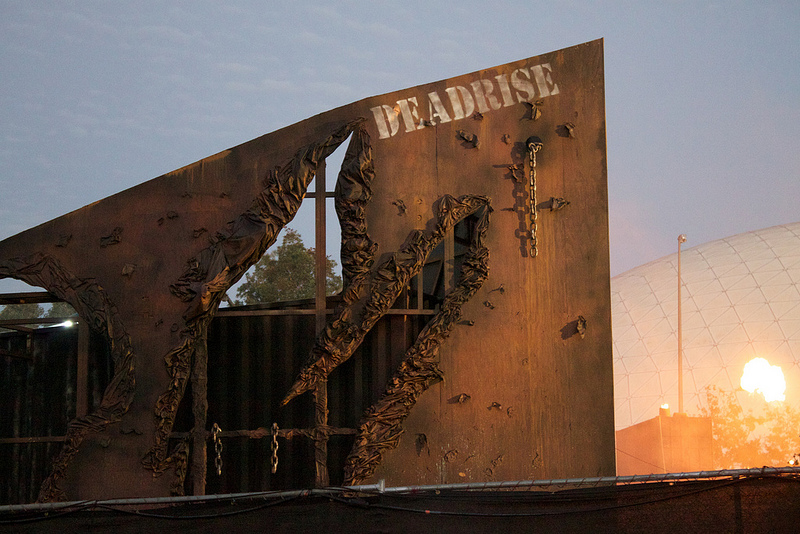 This maze is located almost right in the middle of the Dark Harbor grounds, and the facade is impressive: an old, rotting ship appears to be sinking right into the ground. The maze winds through the barracks and bowels of the ship, encountering half-dead sailors who loudly bang on metal barrels with pipes. There are even monsters above you in some of the scenes. This maze had a lot of fog, and the lighting was pretty dark, which augmented the scares. This maze has one of the most intelligent uses of space we’ve seen in a long time. Although from above it looks very compact and short, it’s actually an extremely long maze. The path winds around itself many times, and as we walked on and on, we kept wondering how much longer it could go. They’ve also made very smart use of enclosed and open-air spaces. For example, the sailor’s sleeping quarters are indoors (as they would be on a ship), but the decks of the ship are in the open air. This attention to detail was very impressive. The finale scene was also awesome: As you leave the Deadrise ship and the hell-bound souls behind, you enter a tunnel filled with fog and and blinding bright light that brings to mind an ascent toward heaven. But don’t relax, because you can bet there are a few monsters lurking in that fog who are there to give you the best scare of the night. 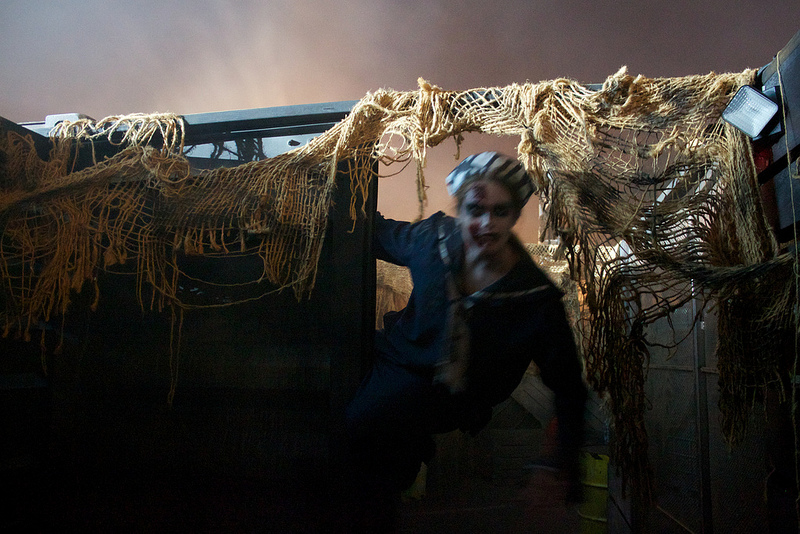 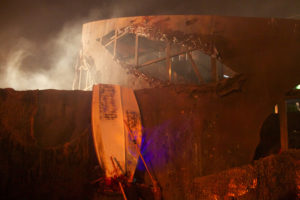 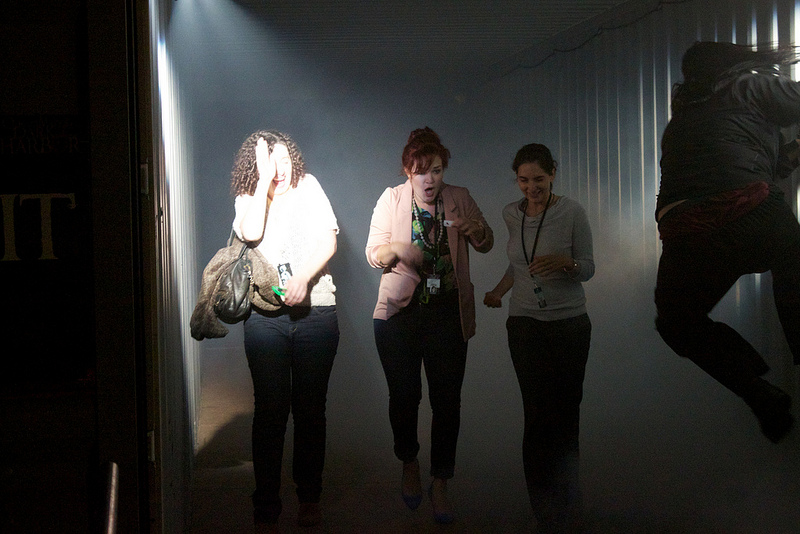 Village of the Damned (in the village)
This maze takes you through a variety of environments and scenes, including some rooms in a village house, a maniac’s butcher shop, and a cave/jungle hybrid area. The actors were at the top of their game on the night we went, and they managed to scare us many times. The closed-in spaces and winding paths provide many corners and shadows for monsters to hide in; we just wish the scenes were a bit more consistent and had a slightly more coherent story line. They’ve added a couple of new scenes toward the end of the maze. Also new for this maze is the addition of a “haunt video” you can purchase at the end, which shows your reaction as you go through. It’s an interesting idea and a bit of a change from the standard photo most haunts are taking these days. 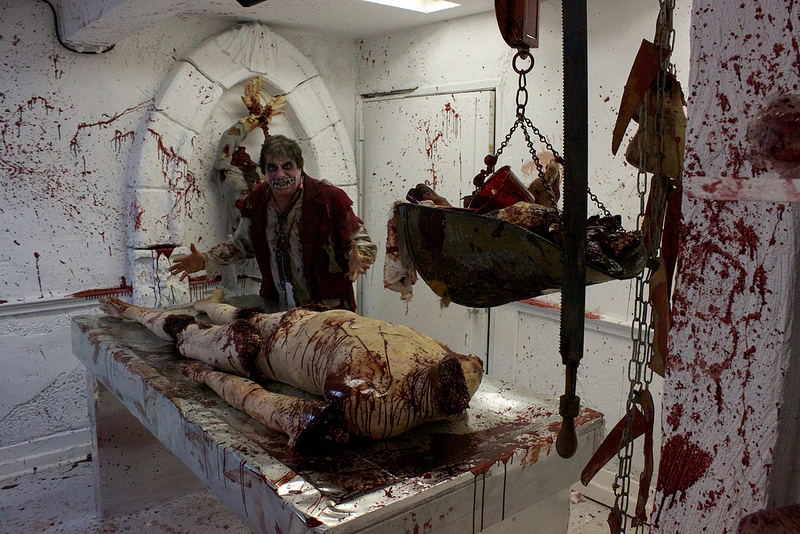 The Cage (in the Dome)

The Cage is one of the most unique haunt concepts we’ve ever experienced. There’s no real story to this maze; rather, the entire experience is like taking a crazed stroll through a junkyard while high on bath salts. The maze is almost all in black, white, and silver: the walls are black, the monsters’ masks are white, and a metal fencing surrounds everything. The soundtrack goes perfectly with the feeling of the maze: loud, jarring, and disorienting. The maze begins in a tunnel of lights, the floor shifting beneath you. You then go through a set of black curtains, and you cannot see a single thing. In fact, this part can be tricky to get through at all. We found ourselves turned around several times trying to find our way through, which is a perfect entrance to the rest of the disorienting maze. Lights flash, hands come out of walls, and sparks fly. Sometimes mazes don’t need an elaborate back story to be effective, but the consistent feeling in this maze makes it truly unique and one of our very favorites. 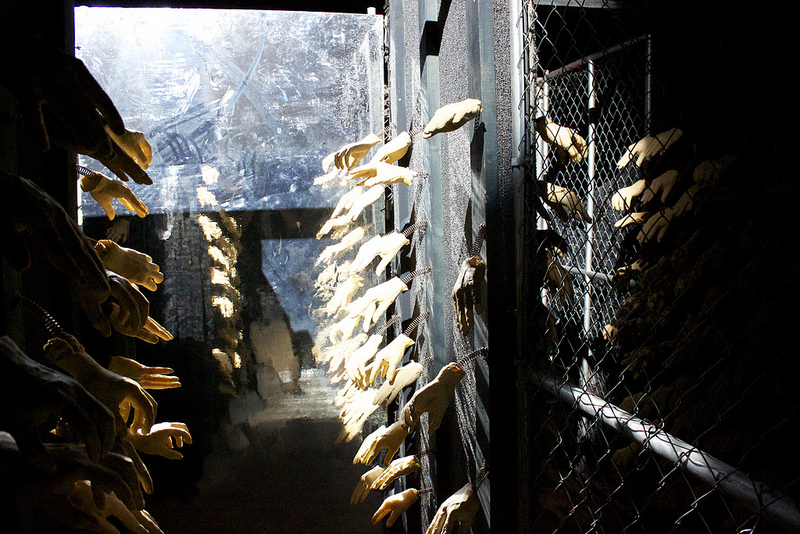 Ratings:
Containment (on the ship)

In previous years, the story of this maze was about a virus breakout on the ship that infected passengers and crew, which was fitting since the maze takes you through the ship’s actual infirmary. This year, they’ve changed up the story a bit, and it’s now about Samuel, an insane shipmate who was put in confinement and later found ripped apart. The maze has an insane asylum type of feel, and the actors go around alternately yelling at you to get out and then pleading for your help. The closed-in spaces of the ship make for some good claustrophobic feelings, but overall we didn’t find this one to be too scary. 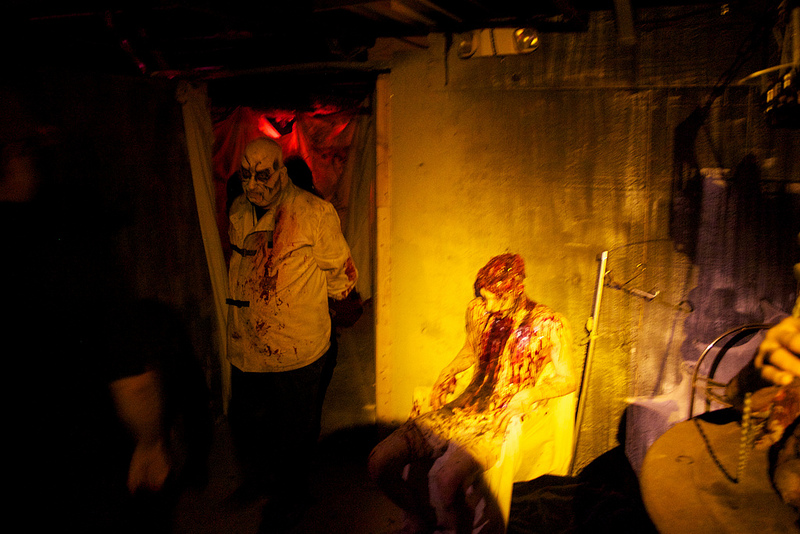 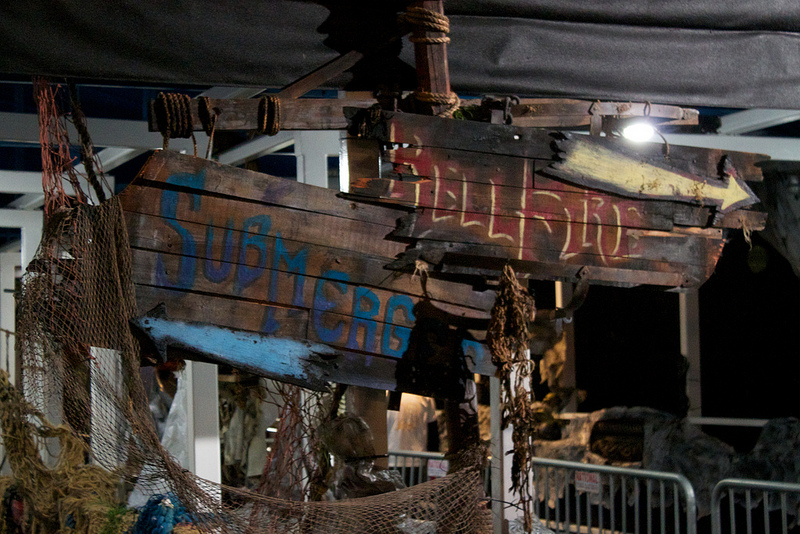 Submerged (on the ship)

This maze seemed more or less identical to last year’s version. The ship’s decks are taking on water. Victims are drowning and coming out of the dark and water. The opening scene for this maze is well crafted with real water pouring everywhere and a few well-placed animated props. There were some very zealous monsters in this maze, chasing us through several scenes. The finale of the maze takes place inside the ship’s pool room, which is reported to be truly haunted. In this room, the ghost of the little girl, Scary Mary, sings and runs along the side of the pool as we passed, which was a good way to tie in their mascot monsters for this year. Graceful Gale also haunts this maze.

Hellfire (on the ship)

Of all the mazes, this one appears to have been the most neglected for 2012. Last year, we noted many cool lighting and fog effects, but unfortunately, they seemed to be missing this year. In addition, there was a lack of monsters during our walk through. This maze is themed to a fire on the ship, but we didn’t feel the theme very strongly, and it looked a bit generic to us this year.

Queen Mary has done a great job this year with their addition of the new maze “Deadrise,” which ties in perfectly with the other mazes and the overall theme. The new monster mascots are also a nice touch. Although we missed the entrance and the Barricades scare zone, they’ve improved the overall layout of the grounds, grouping several food vendors together and adding picnic tables, which we found to be a nice place to sit and catch our breath after screaming in the mazes. There are bars serving alcohol and a stage with live music, so the event holds a lot of activities to fill the night.
Also new this year is the “RIP Lounge,” where you can relax and have a drink and some food . . . for an upcharge, of course. The lounge is a cool place to kick back after you’ve experienced the mazes, but we don’t think that it offers that much additional value, and we wouldn’t recommend it unless you have a lot of money to burn. 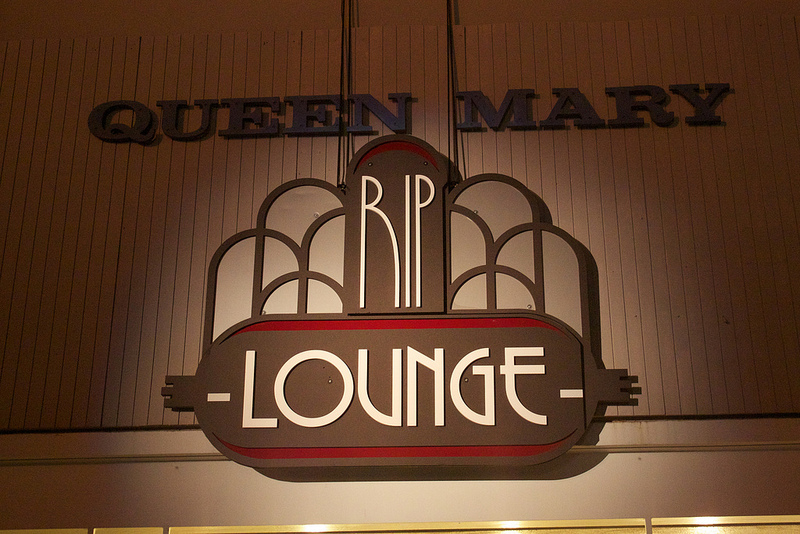