Reign of Terror (ROT) began as a home haunt 12 years ago and steadily outgrew itself over the years, until it found its permanent home in the Janss Mall in Thousand Oaks a few years ago. Each year, the haunt grows just a little bit bigger, adding new mazes and improving on the old sets. This year, we were particularly impressed with some of the upgrades and changes the ROT creators have made. The four mazes that comprise ROT feel much more cohesive this year, the result of a new layout that has improved the flow and brought together all the mazes into a nice story line.

This year, ROT has added a new maze, called “Miner’s Revenge,” which, as the name implies, is a tour through a “dilapidated mining town.” In addition, they have completely revamped the queue area, which was already the best queue of any haunt we’ve experienced. As you wait in the dark indoor line, there are a lot of impressive sound and lighting effects, as well as animatronic props. The queue snakes through various elaborate sets, including new scenes of a saloon and Western-style facades. In fact, the line seems to be the perfect precursor to the first maze, the new “Miner’s Revenge.” We attended ROT with a few family members who had not been to any haunted attraction in a long, long time, and they found the queue itself to be scary.

Unlike some other haunts who have separate lines for each maze, ROT is a continuous experience. That is, you go through each maze one after the other without waiting in another queue. This is why it’s important for the mazes to have a good flow. This year, the new layout was much improved over last year by beginning with Miner’s Revenge and continuing into The Haunted House and Blood Manor, and finishing up at The Asylum. Overall, this sequence made a lot of sense, and the transitions between each were much more fluid.

At the entrance to the attraction, we were greeted by miners with pickaxes, who welcomed us into the new Miner’s Revenge maze. This maze is somewhat short, but it’s very detailed, as you make your way through a mining tunnel complete with lanterns and rock walls. Unfortunately, this part did not have many actors, but the static props were pretty cool to look at.

We next entered The Haunted House, which has a traditional Victorian-style haunted mansion feel. The elaborate sets made us want to stop and admire each room, but the creepy actors kept us moving. This maze is a mix of actors and animated props, which works pretty well. One addition involving curtains that open on their own was particularly freaky to us. We can’t say enough about the level of detail in this maze. You could go through several times and see something new each visit. There were some good scares here, and they’ve even added a candid photo opp, where they take your picture as they scare you. The post the pictures up on Facebook, so you can download yours for free, which is a nice alternative to the typical $15 other haunts charge for awkward posed photos. 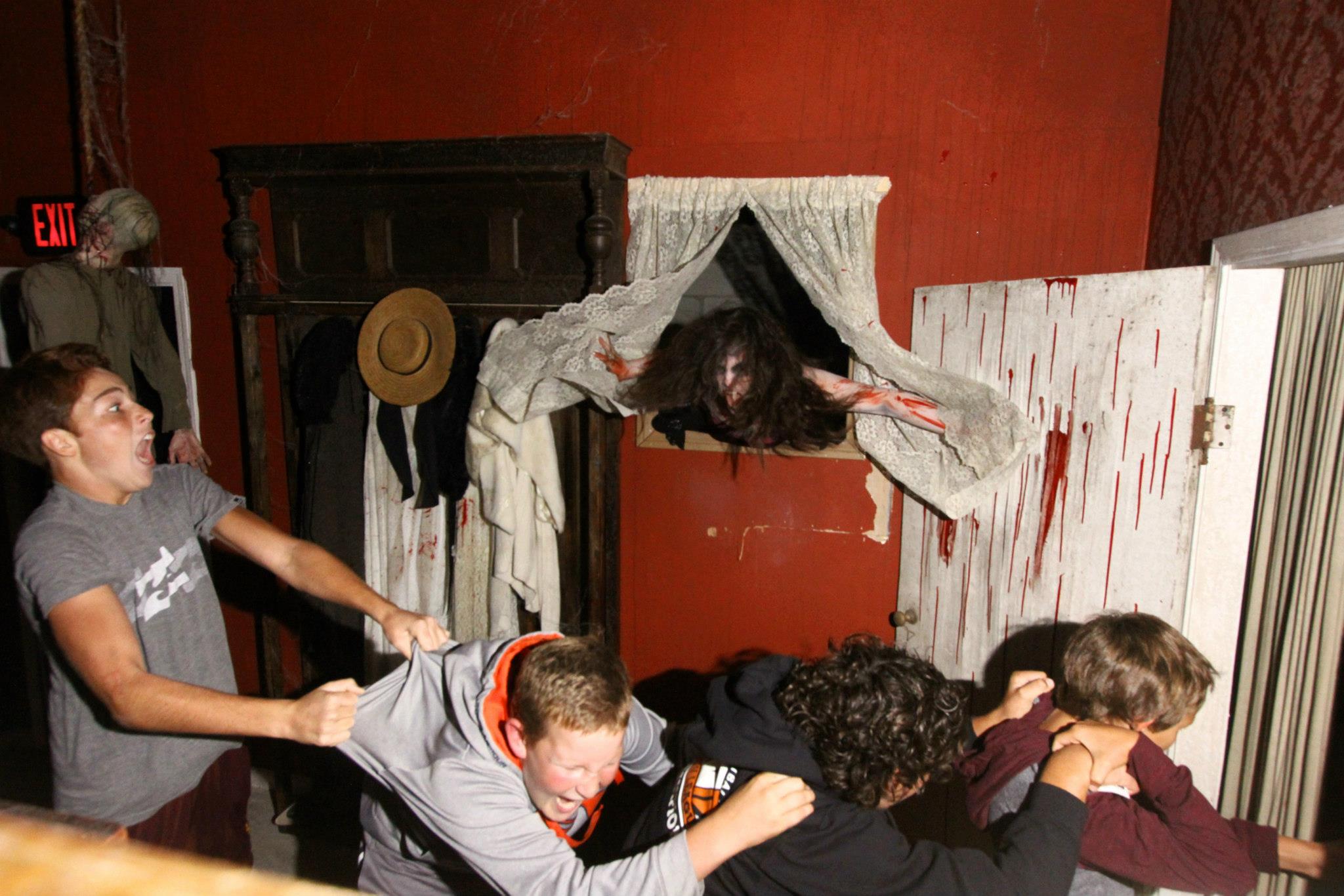 Blood Manor follows The Haunted House, which works well because it’s another “house”-themed maze, only this one is a little more demented. Something has obviously gone wrong here, as blood covers every room. Everything here is high contrast: stark white walls are covered with dark red blood. The kitchen scene is particularly disturbing, and the inhabitants of Blood Manor are demented maniacs, which naturally leads us to the next maze, the Asylum.

The Asylum is another very well-themed maze, and we encountered some of the best actors of the night here. In an autopsy scene, the actor remained so perfectly still as we passed that we were really convinced that he was a static prop. Of course, he proved us wrong by scaring our asses off. Other actors were deranged and threatening or pleading for our help.

Reign of Terror continues to be one of our favorite haunted attractions in Southern California, and we highly recommend driving to Thousand Oaks to experience it. Even though ROT’s budget must be minuscule compared with some of the big-name theme park haunts, their dedication to detailed sets, innovative scares, and improving the guest experience year after year elevates them above much of the competition. We look forward to seeing what they come up with next.