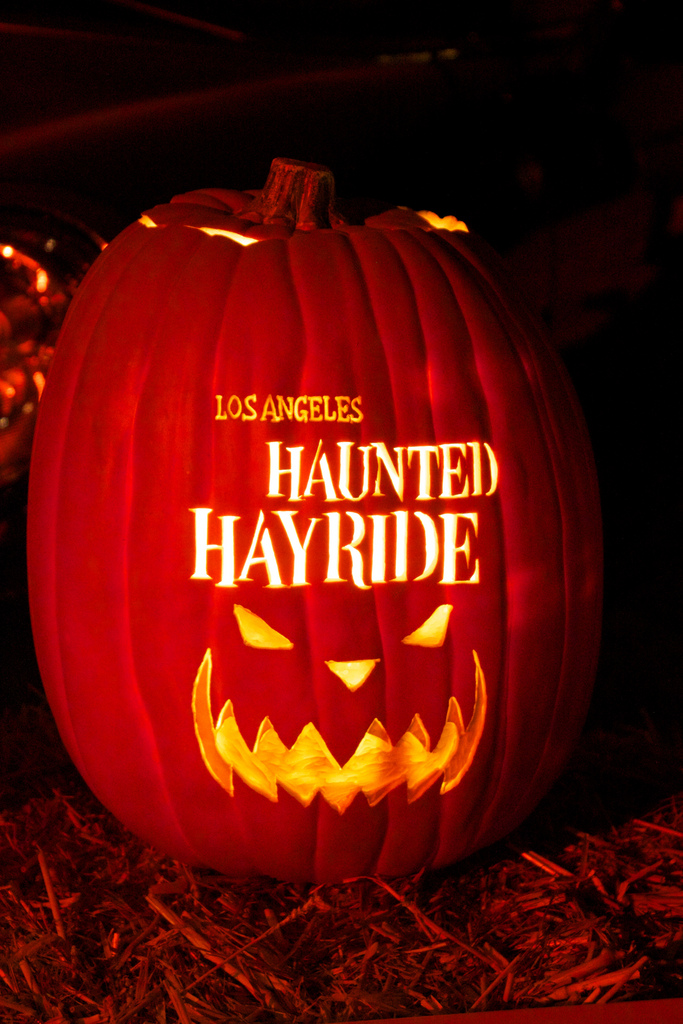 Since 2009, the Los Angeles Haunted Hayride (LAHH) has grown from a small, charming (but scary) hayride set in the rolling hills of Calabasas to a big, glitzy, celebrity photo opp–filled attraction in Griffith Park. It seems that during the entire month of October, every time we hit “refresh” on the TMZ webpage, we see yet another celebrity sighting at LAHH. This is one of the reasons the haunt has become a big-name attraction in Los Angeles, and its celebrity appeal is a testament to the haunt’s heavy marketing focus. In fact, their tagline is “LA’s most buzzed about Halloween Attraction.” Unfortunately, we feel that LAHH, like many celebrities, has a lot of hype but is lacking in substance.

We skipped this haunt in 2011 after finding it a bit lackluster in 2010. And in fact, we were on the fence about attending at all this year, until we heard a particular celebrity we had long admired was going to be making an appearance…ELVIRA! We have been Elvira fans since we were children, when we were mesmerized by Elvira’s Movie Macabre on KTLA. LAHH promised a “Ride With Elvira,” in which for $100, you not only got a photo and meet & greet, but you also got a ride on the hayride with the Queen of Halloween herself. We could not possibly pass up this once-in-a-lifetime opportunity, so we quickly bought our tickets, started practicing our one-liners, and began the countdown to our “roll in the hay” with Elvira. 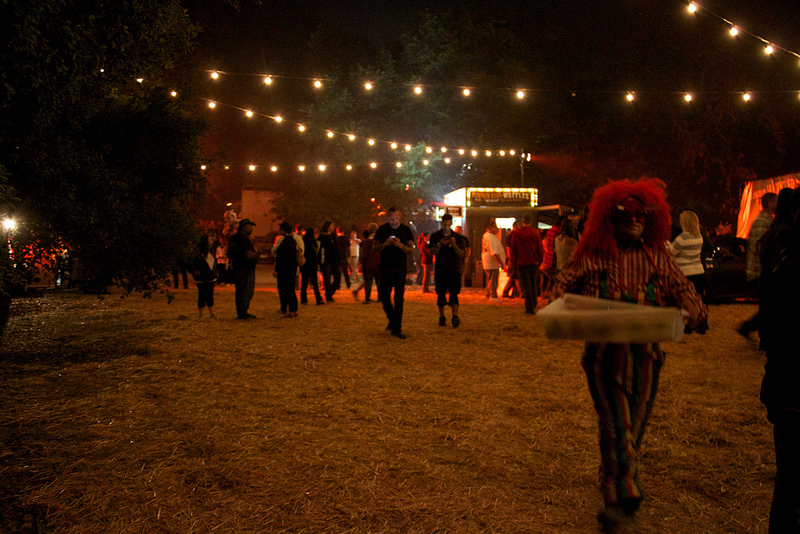 When we arrived at the hayride on the appropriate night, we encountered a clusterfuck of epic proportions. Now, what we will describe next pertains only to those of us who bought the (expensive) tickets for the Elvria hayride, so we assume (and desperately hope) that the LAHH was more organized when it came to regular ticket holders.

Although marketing was heavy for the Elvira experience (we received a couple of marketing emails about the event), they seemed to have stopped their planning there. Our perception was that they had made no preparations for how to handle those of us who paid $100 for our tickets that night.

On arriving, we went straight to the entrance ticket booth and asked the employee in the window if we needed to exchange our printed-out Elvira tickets for a wristband or something, and he said no, we just needed to wait in the regular line. This seemed odd to us, since we were supposed to have VIP access with our ticket, so we asked another employee walking around where we should go. This person didn’t even seem to know what we were talking about when we said “Elvira,” and she told us to stand in the regular line as well. Given the clueless look on her face, we wisely did not follow her instructions and instead started wandering around the grounds trying to figure it out on our own.

Eventually, we made our way to the hayride entrance, where yet ANOTHER employee had no idea what to do with us. First, she tried to put us on the VERY NEXT (regular) hayride, even putting us in the “holding cage” with a few other Elvira ticket holders. We had to start yelling at her that we were supposed to go on the hayride with “ELVIRA.” So she took us out of the cage and made us stand to the side while she found someone who knew what was going on. As we stood with the other people who paid ONE HUNDRED DOLLARS to be treated like crap by clueless employees, our collective anger began to grow. Finally, someone arrived who told us to go “wait in the dirt area by the carousel” (for 100 bucks, at least they could’ve called it the “VIP dirt area”).  A few other people with tickets refused to leave the hayride entrance, saying that they already went to the “dirt area” and someone there told them to wait at the entrance. To make matters even more confusing, some people had specific hayride times printed on their tickets, and some of us did not. We were admonished by one employee, who testily said that they sent out emails telling us when our times were. After scouring through all our email and junk mail folders, we found no such thing. (What we did find, however, were several annoying marketing emails from LAHH pleading for our vote in a haunted attraction poll, which was apparently more important to them than following up on mistakes they made when selling tickets.)

To cut a long story short, after spending some quality time waiting in the dirt, we eventually made it on the ride with Elvira. We don’t usually rate customer service in our haunt reviews, but if we did, LAHH would get a BURIED SKULL in this category. We hope that in the future, they spend as much time planning for these special events as they do on marketing them.

This year, LAHH’s website indicated that the hayride would take us through the prequel to last year’s Clifton Twins’ story, being centered on the story of Aleister, who “preached a dark religion” and created a cult following, eventually ending in a “horrific church fire” that destroys the entire town. This story sounded awesome to us, and we imagined that they would be using their large, impressive church scene as a centerpiece of this story. We were intrigued by this dark storyline and boarded the hayride ready to be scared.

The opening scene included a couple of disfigured mannequins who looked straight out of the 1950s. This seemed to set the time frame of the story we were about to enter, although some people on our hayride seemed confused by these props. Several of the scenes tied in well with the overall storyline of Aleister. The church scene was particularly impressive, involving a near army of actors who descended on our trailer en masse as a demon rose high above us. This was definitely one of the best scenes we’ve seen at a haunt. Unfortunately, things only went downhill from here.

Although many of the new scenes did seem related to the back story, some of them were true “WTF” moments. For instance, a scene involving 1980s-era cartoon-like “rock stars” (which went on way too long) had us laughing like crazy, and not in a good way. There was also the requisite “crazy clown” scene in the circus tent, complete with strobe lights and Disturbed’s “Down With the Sickness” blaring loudly in our ears. We also encountered a demonic Santa’s Village with creepy elves. Perhaps these scenes tied in somehow to the 1950s-era story of the “dark hand of cults,” but we just couldn’t make sense of it. Many of the sets seemed picked out of a Halloween catalog of typical “scary” scenarios, which seemed lazy to us. LAHH is going in the right direction by creating a back story, but unfortunately, the hayride did not deliver a coherent theme.

We noticed reuse of some props and sets from previous years, but there is a lot of new stuff to see. They have certainly expanded the scenes and have added some really cool effects, including actors who swing right over you. As promised, the experience was almost “360 degrees” (after all, it would be hard to get an actor under  the trailer), and there were also a few scenes that involved water effects (they give you a poncho to protect your clothing). In addition, we found the lighting to be better focused in some of the scenes and also somewhat darker, which made it harder to see the actors lurking in the shadows (a good thing). However, some props were hard to see, and after passing one moving prop, even Elvira commented that “they need to light that better.”

The main problem with the hayride is that it’s just not scary. Now, surely there are some people who will find it scary, but we didn’t find ourselves startled even once. Perhaps it’s just the nature of any hayride: the types of scares possible are limited, for instance: (1) an actor in the shadows lunges at the trailer and gets right in your face or (2) a group of actors surrounds the trailer and get right in your face. The sets are cool to look at, but if you’re looking to be truly scared, we can’t recommend the hayride for that. 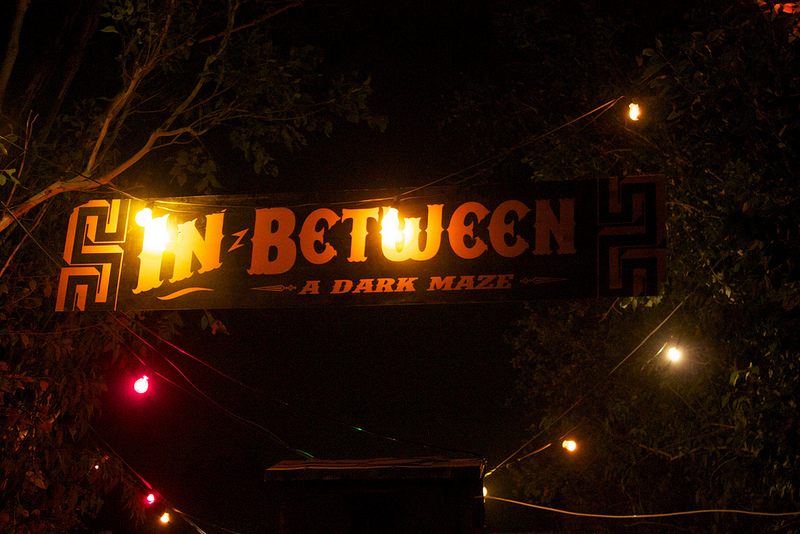 This is a true maze composed of black walls in almost complete darkness. One member of each group is given a small lantern to help guide the way . Beware of dead ends and monsters lurking in the shadows. This maze was actually pretty fun, and we found it to be scarier than the hayride. A small portion of the maze is outdoors, in which the walls are made of chain-link fence. There’s not much to see in the dark part (because it’s dark, of course!), but there are a few animatronic props in the chain-link fence portion. Overall, this was a fun attraction, but note that the line can get REALLY long. We probably had fun because we didn’t have to wait due to our VIP tickets. We suggest hitting this maze early in the night (before the hayride) to avoid the long lines.

This area contains a few minor activities you can do after the hayride if you want to extend your night. There’s a rickety carousel that runs backward and a standard mirror maze you can find at any local carnival. These attractions are free, so they might be worth checking out. There are also psychics, a small store selling LAHH and other items, food trucks, and drinks. 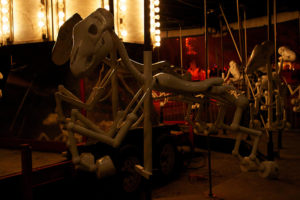 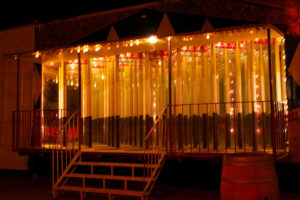 Although LAHH has grown a lot over the past few years, it still disappoints when it comes to scare factor and providing an overall, coherent theme. We experienced extreme disorganization with our Elvira hayride tickets, but we applaud them for coming up with the idea of hosting an Elvira evening for fans in the first place. Perhaps this young haunt is still finding its way, but we hope they will focus more on the quality of their haunt and less on marketing gimmicks, celebrity sightings, and haunted attraction polls in the future.