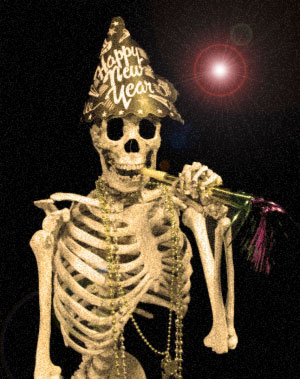 As 2012 comes to a close, Scare Zone would like to thank all of our readers for checking our our site this year. It was a great year for haunts and horror, and we’re glad to see the haunted attraction business growing bigger and better every year. Be sure to check back with us throughout 2013 as we bring you the latest news and rumors regarding haunted attractions nationwide.

Of course, you can’t end a year without a best of/worst of list. So as we slowly lower 2012 into its grave, it’s time to look back at some of the best and worst haunt and horror moments of the past year.

♦ Haunts aren’t just for Halloween anymore – Over the past few years, haunted attractions have been making an effort to expand their business beyond the standard October Halloween season. This is a great trend for haunt stalkers, because it gives us many opportunities to be terrified throughout the year. In 2012, we saw haunts open for Friday the 13th (January and April), Valentine’s Day, and Christmas. 2012 also saw the inauguration of a great new year-round haunt in (where else?) Las Vegas, Eli Roth’s Goretorium.

♦ Haunt and horror conventions continued to get bigger and more innovative – And the best of the bunch include TransWorld (March), Monsterpalooza (April), HauntCon (May), and the Midwest Haunters Convention (June). Not only are these conventions a great place to see the latest in haunt technology and innovation, but they also feature off-season haunt tours! This year, we saw horror conventions set sail on the high seas (Tides of Torture cruise, Saw movie cruise) as well as ones taking place in campgrounds (Haunted Slumber Camp Massacre, Horror Camp Live). We hope that these events continue to come up with crazy new ideas to keep us traveling around the country.

♦ Knott’s Scary Farm is back on top – The original theme park haunt had slipped in quality over the past decade or so, but in 2012, they came up with some truly original concepts (Pinocchio Unstrung, Trick or Treat) that made them stand apart from their competition. Although they still have room to increase the level of scares, we were really impressed with their comeback this year and awarded them best theme park haunt.

♦ The Zombie Apocalypse arrived (and it’s time to eradicate it) – Zombies were everywhere in 2012! From the Zombie 5K race touring the country, to the “Walking Dead Escape” experience at ComiCon, to the Walking Dead mazes at Halloween Horror Nights Hollywood and Orlando (plus the Terror Tram), it was impossible to escape the hordes of bloody, flesh-craving “walkers.” Zombies have had their day, and we think it’s high time for something new. We’ve said many times that although zombies may be creepy and gross, they are not scary. But with the popularity of AMC’s The Walking Dead at an all-time high, will we be able to kill off these zombies in 2013?

♦ “VIP” mazes and front-of-the-line upgrades emptied our wallets – Depending on the size of your bank account, this trend of “upcharging” guests at theme park haunts is either a really good or a really bad thing. If you’ve got the money, a front-of-the-line pass is a great way to beat the long lines, and VIP mazes limit overall capacity and prevent the conga-line effect inside the maze. At Knott’s Scary Farm, their VIP maze “Trapped” was able to present guests with puzzles they had to solve in order to advance to the next room, which would be impossible to pull off in a traditional maze. However, these gimmicks are just band-aids on top of overcrowding issues (especially at HHN), and we wish the theme park haunts could come up with more innovative solutions that would benefit all guests—not just those with the ability to pay more.

♦ Pop-up haunts left us disappointed – These are haunts that pop up in mini-malls or empty parking lots, usually around the end of September. Some of the owners seem to be in it just for the money and don’t have a great love of haunts or Halloween at all. Black plywood walls, cheap 3-D effects, and a lack of actors lead to a disappointing experience. Although these haunts usually have cheaper ticket prices than the big-name haunts, they usually suck and aren’t worth the money. However, rare gems can pop up occasionally. Scare Zone tries to visit as many of these haunts as possible and provide our honest reviews.

♦ Extreme haunts tested our limits – “Blackout” came to Los Angeles this year, and after reading a few reviews of the New York version, we just couldn’t get excited enough to visit this one. We suppose it depends on your personal limits, but these haunts sound more like an actual torture session than a fun walk through a haunted house. What we love about typical haunts is the use of suspense, atmosphere, and well-placed startles to give you an adrenaline rush similar to riding a rollercoaster.  In contrast, the scenarios inside these “extreme” haunts are designed to make you feel very uncomfortable. We’d love to see this kind of psychological manipulation incorporated into haunts in a more subtle and fun way; until then, we just don’t feel like paying to be waterboarded.