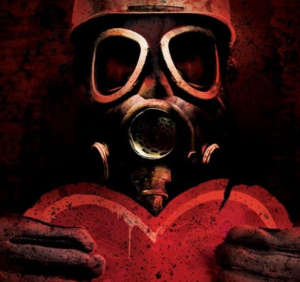 Here’s a little Valentine’s treat for all of you:  a video walk through of the 2009 HHN maze “My Bloody Valentine: Be Mine 4 Ever” .

The idea to use this movie theme for a maze was a good idea, but unfortunately, it never fully delivered the scares and was one of the weaker 2009 offerings. This was thought to be a late addition after the plans to have a Wolf Man maze fell through. Like all the other HHN mazes, this maze did have very detailed sets and a strong linear story, which closely followed the plot of the 2009 remake. The mine shaft sets were well detailed and added to the foreboding sense of claustrophobia. However, one of the biggest issues had to do with the scare timing (you’ll see in the video), which was affected by the very elaborate sets that were hard for the scareactors to quickly “reset”  with the streams of people going through. Perhaps, had they added the 3D effect to this maze to complement its theatrical namesake, that would’ve upped the fear factor some. Nonetheless, it was still fun and an unique maze for HHN Hollywood.