In a recent Facebook post – our friends at The Haunted Play Presents: Delusion have been hinting around with the idea of doing a Vegas version of their show. With their show’s mix of magic and horror we think that The Haunted Play could be strong compliment to Vegas’s unique haunt season offerings such as Goretorium, Freakling Bros.,  The 13th Floor Experience and Penn & Teller (scary we know). 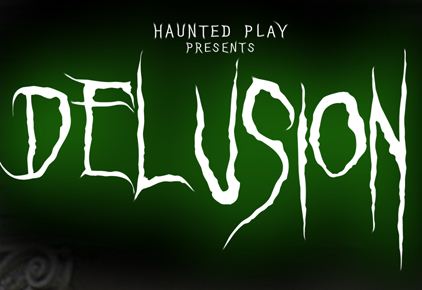 In his recent trips to explore the possibility, Haunted Play creator Jon Braver, believes that there is great amount of potential there, yet he realizes that the Vegas audience is quite different from L.A. (Hollywood) crowd. In addition, for a Vegas production  he received the suggestion to make it more of a flow-through event (i.e. get more people through, quicker!). From a purely business perspective it makes sense. From a Haunted Play perspective that means a loss of intimacy and doesn’t coincide well with Jon’s goal to make it a high price ticket event which will allow a truly unique, interactive and intimate experience.

Perhaps, they can find the right balance with either a space that allows for  two groups to tour simultaneously or enter more frequently after each other. In L.A. the challenge is that the mansion location requires some backtracking through scenes, so to keep groups from colliding they have to keep them spaced apart thus limiting the number of “tours” they can offer each night. In addition, the mansion is located in a residential neighborhood so they have to stop shows by a certain hour which isn’t an issue in Vegas.

The Vegas version isn’t confirmed but they are currently scouting locations so it seems that there is a strong likelihood we’ll see see some Delusions in Vegas.

Back in L.A., The Delusion Mansion (talk about your fixer uppers), which has been their home for the last two years, is currently for sale. It seems that bids are coming in around the $900K. It’s believed that owning the mansion would serve as a viable investment property as it’s frequently used for film shoots throughout the year and of course Delusion from mid-Sept to mid-Nov.

This doesn’t mean they’re planning to move out of L.A. (pending the new owner’s willingness to rent the home for an extended period of time) but they are also considering opening another show in Pasadena (L.A. suburb). This could be good whereas they will be able to create a completely new kind of experience within a new house/mansion. Pasadena has some very old historic and creepy neighborhoods and houses including the famous Michael Myers house from Halloween so they should fit right in.

We also don’t know if Neil Patrick Harris will be contributing his creativity to the show again but we’ll keep you  posted as we hear more.