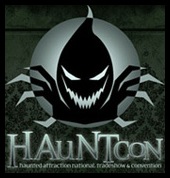 2013 is being coined as ‘the year of fear’ and we like how that sounds. The year is already starting off right with some exciting news about the haunt tours being scheduled for HAuNTcon 2013 taking place in Irving, Texas April 24-28.

Every year the convention travels to a new city to give attendees and Haunt Stalkers another chance to tour the Haunted Attractions that they may not be able to get away to experience in October. With this year’s convention taking place in Dallas, TX, Haunt Stalkers will have exclusive access to some of the most renowned haunts in the nation. In fact, the Dallas area has so many Haunts they’re offering haunt tours across 3 nights. In addition, there’s a newly added pre-show haunt tour which will cover 13 haunts in a record 32 hours! This sounds like a Haunt Stalker’s nightmare come true and you can bet that the Scare Zone crew is planning to pack our body bags to attend what is seemingly becoming one of best haunt conventions to date!

The 2013 HAuNTcon Pre-show Tour, April 24- 26, is going to be the best in our our 10 year history. After scouring the Texas Countryside looking for haunts to tour, we have made arrangements with the best 16 available Haunts and Haunted Attractions and packed them into two days of both actor filled lights off and back stage lights-on tours for your fright-tainment.

Leaving early on the 24th, this tour includes all transportation, meals on the road and attraction admissions for each day of the tour. Unlike most year, the buses will return to the host hotel, Sheraton DFW Wednesday night. So you are on your own for hotel accommodations and but can hang out with the vendors and early arrivals at the hotel. But don’t stay up too late, because the buses leave early again on the 25th for another full day of haunt tours – arriving back at the hotel just in time to freshen up before getting back on the buses for the Thursday Night Kick off Haunt Tour (not included in the pre-show pricing).

What is included is transportation, three meals and Haunted House tours of Milton’s Manor ,The Haunt House , Creekside Manor , The Moxley Manor , Chaos Haunted House , Fatal End: Dollz , Tayman Mines, Fappy the Clown’s Theatre of Wonders, Gravedigger’s Hollow and Tayman Funeral Home at Tayman Graveyard. The spotlight of the pre-show tour is the massive inside and outside Parker House .

But the pre-show tour is not just business. We will be traveling the width and breath of Dallas Ft. Worth on this incredible tour. Lunch on Wednesday is at the infamous Ole’ Spaghetti Warehouse (reportedly haunted). What do you do when you are fanatics in the true sense of the word for the 60′s TV sitcom The Munsters? If you are Sandra and Chuck McKee you build a replica of the Munster House and live in it. The owners have invited us for a visit of this amazing residence. While we are talking about amazing homes, one more stop on the 2013 HAuNTcon tour is Dallas Cowboy Stadium, home of the Texas NFL team. No trip to Texas is complete without a visit to this amazing structure.

Depending on how your count that is about 13 haunts in 32 hours, PLUS some surprises that we cannot announce until the tour starts. This is a once in a lifetime opportunity, not to be missed tour. CLICK HEREto purchase tickets and I will see you in Dallas early April 24th for the HAuNTcon 2013 Pre-show Tour!

HAuNTcon 2013 is shaping up to be the biggest HAuNTcon in history! And tickets are NOW ON SALE!