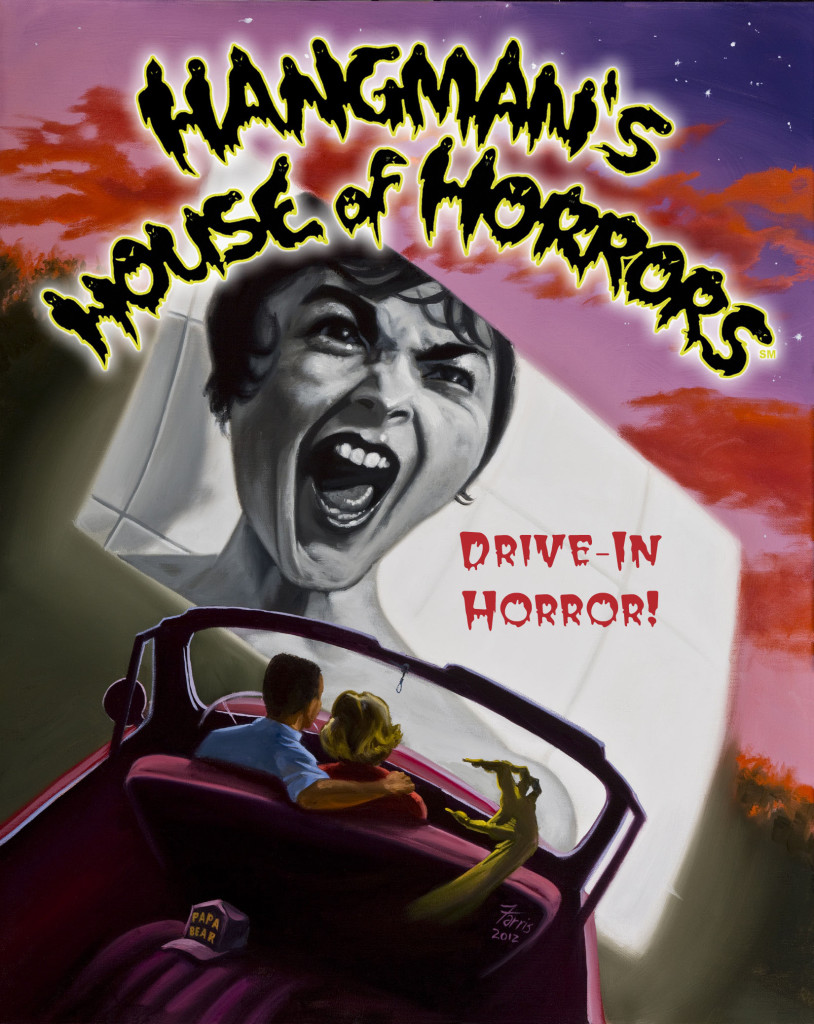 Hangman’s House of Horrors is one of the premier haunts in Texas and one of the top charity-benefiting haunted houses in the nation! To date, they’ve terrorized over half a million victims and donated more than $1.8 million to local charities! This year marks their 25th anniversary and during the HauntCon Tour we were able to experience this venerable haunt in both a ‘lights on’ tour and in full ‘show’ mode.

During the time of our visit they were still running their 2012 theme – Hangman’s Drive-In Horror. They are currently working on creating a new show for the 2013 haunt season. From what we saw during the ‘lights on’ tour, they won’t (can’t) change around too many of the rooms inside but will make a few changes here and there to keep the experience as fresh as possible for their repeat Haunt Stalkers.

Hangman’s is an enormous haunt and will take a minimum of 25 minutes (at a running in terror pace) to get through. It includes a mix of  scareactors and animatronics within a wide array of rooms featuring elements like uneven floors, spinning tunnels, swinging bridges, claustrophobic hallways, and even a “find your way our” maze. Just about every traditional haunt element and character you can think of can be found inside this House of Horrors.

As our Haunt Stalkers know, we’re not big fans of haunts that don’t have a consistent theme. Going from a room with zombies, to a psycho clown circus, into an alien spaceship distracts us from the scares. Inconsistent theme transitions are  jarring to us and diminish the pseudo-reality of the experience. We can get into the idea that we’re in an alien invasion or demented circus, but don’t believe the two would coexists; unless we’re talking about the Killer Klowns from Outer Space. 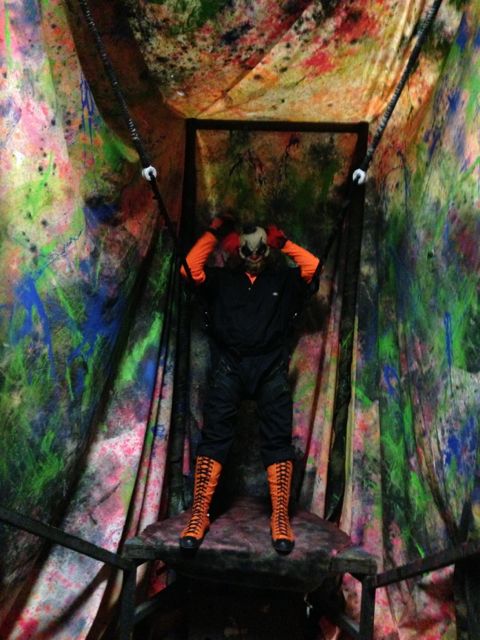 Hangman’s can easily be classified as one of the haunts that’s an amalgam of all things scary. However, they’ve cleverly derived an overarching story that helps them get away with it. By using the Drive-In Horror theme they’ve set the theme of being a terrifying journey through the varied world of horror movies. This is accomplished in the first scene where we’re in a creepy concessions stand that has a big screen playing various clips from classic horror movies. An usher then appears and motions us up to the screen, which impressively splits open to reveal a long spinning tunnel. This is our portal into the movies and the rather random scenes of terror to follow. The simple effort of establishing the maze as a trip through the movies made it easier for us be forgiving to their sporadic mix of themes and characters inside.

It probably wasn’t the best arrangement for us to do the lights-on tour before we went through the full haunt experience. On the tour we saw where the scares were and the secrets to their many special effects. Nonetheless, we still had a few scary moments during ‘show mode’ and even got lost for a few minutes inside the maze room (even though we had tried to memorize the layout). Inside Hangman’s we found some rooms to be much more elaborate than others. We won’t give it all away but there were some noteworthy highlights.

Our favorite room inside the haunt would have to be the room set to the original Night of the Living Dead. This room is one of their newer additions and they recreated the effect of the black and white movie by using flashing black-light against the white sketched sets and costumes creating the awesome effect of actually being inside the old black and white movie. This effect reminded us of one of our favorite HHN Orlando mazes from last year, Universal’s House of Horrors. There also were some very surprising scares inside the Living Dead graveyard and the best zombie scareactor we’ve encountered… ever! The haunt had scenes from Jurassic Park featuring a menacing giant Tex Rex head. There also were scenes from The Toxic Avenger, Sweeny Todd, Trick o Treat, and Friday the 13th. Some of these were interesting and more obscure horror movie references but most of the scenes were nicely recreated. We thought during the show that the Friday the 13th maze could of been much scarier if the scene had better lighting along with giving Jason and his mother more places to hide in. In addition to the movie scenes, there were the traditional clown, dolls, medical lab, and slaughter house rooms; to name a few. 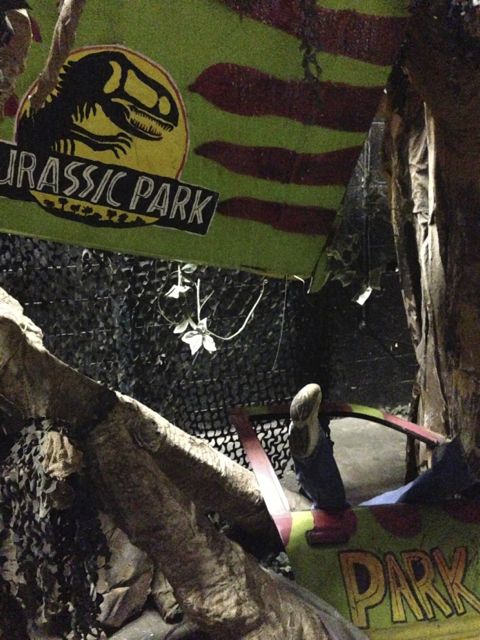 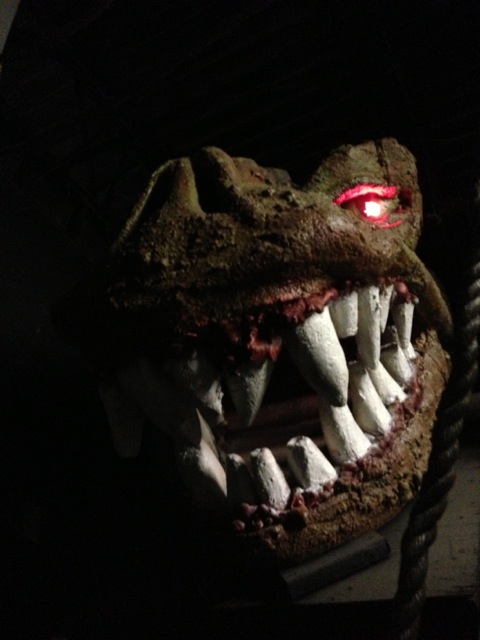 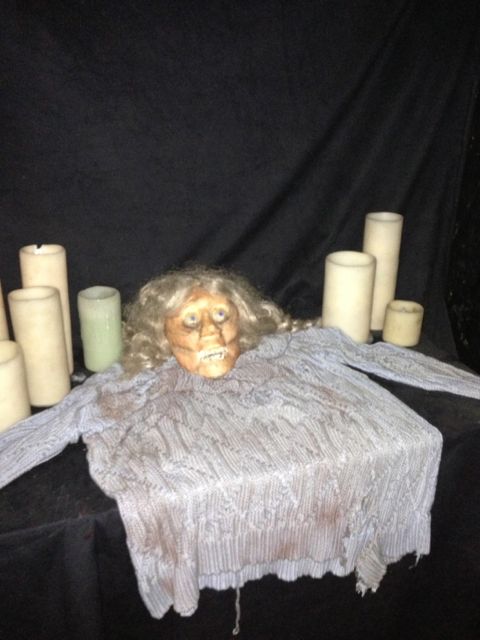 In addition to the classic Hangman’s House of Horrors they have two side attractions: McDagenville and 3-D Wonderland. The former is a short but elaborately cannibalistic Hillbilly themed haunt with a few good scares inside but some of the scareactors did seem to get overzealous (annoyingly) in their roles. The latter, 3-D Wonderland, wasn’t intended to be scary but featured some extremely impressive 3D sets. It was akin to walking through the Alice in Wonderland ride at Disneyland. 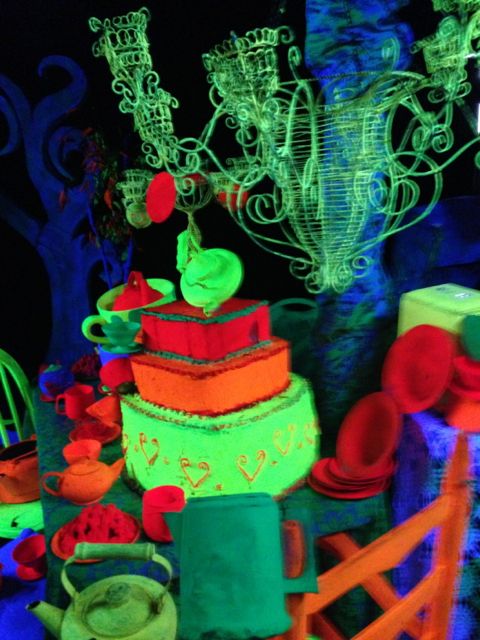 Even without the pre-tour we still don’t imagine that we would of found Hangman’s to be a terrifying intense experience. It does have consistent scares throughout the length of the attraction with most being the monster around the corner type of scares. What Hangman’s does offer is a frightfully fun adventure through a horror variety show. This works well as it’s the kind of haunt that newer haunters and seasoned haunt stalkers can both find enjoyment and scares in. During the HauntCon tour we truly appreciated the hospitality extended to us by the Hangman’s team. They’re very passionate about their haunt and are doing it for charity, which is extremely admirable. Hangman’s also features a very large haunt store where you can buy costumes, props, and just about anything else you would need to go trick o’ treating, or for your own home haunt.

If you are out haunt stalking in the Dallas/Ft. Worth area we recommend that you be sure to include Hangman’s House of Horrors on your scare-itinerary as they are one of the top haunted attractions in Texas.