This week, we continue our coverage of HauntCon 2013 with a review of the “World’s largest haunted house”: Cutting Edge, in Fort Worth. 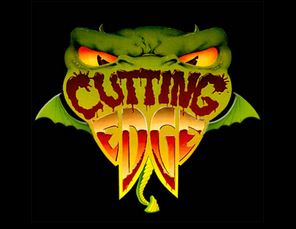 Cutting Edge has been on Scare Zone’s “Must Do” list for a long time. After all, it does hold a Guinness World Record for being the largest haunted house, and it’s certainly one of the most well-marketed haunts in Texas. Unfortunately, we came to find out that, as with many things, bigger does not always equal better.

Cutting Edge is definitely massive. It’s located in an old meat-packing plant that occupied more than 200,000 square feet of space. On the night we visited, it was very crowded; the main parking lot was full, and we were directed to a dirt lot across the street. The line was pretty long, but it did move quickly. We noticed that the crowd here looked much younger, mostly preteens and teenagers. In the queue area, extremely LOUD music was blasting. It was so loud that it was very hard to have a conversation while waiting in line, and because it wasn’t themed or providing any kind of atmosphere (since it was just popular music), it really didn’t add anything to the experience. We’re always disappointed when haunts don’t take advantage of extending their experience into the queue. It’s an opportunity to build suspense and anticipation for what’s inside. Unfortunately, Cutting Edge’s queue only built up a feeling of annoyance, which would end up permeating our entire visit.

Although some of the meat-processing equipment of the original building is still used in the haunt, there is no overall slaughterhouse theme. Instead, the haunt goes through many different themes, such as vampires, jungle, clowns, graveyard, a closet full of shirts (?), and even Saw. Although we don’t usually like “haunt stew,” it’s understandable when you’re talking about a walk-through attraction of this magnitude. But we wish more thought had been put into the transitions between scenes. Some of the scenes didn’t make much sense at all and had us wondering “what is this scene supposed to be?” and the lighting was so dim that it was hard to make out the props, sets, and actors. Darkness is definitely an important element in all haunted attractions, but the smart use of specific lighting helps build up suspense for the scene ahead. If you can’t see anything at all, you won’t be scared when something jumps out at you. For this reason, we didn’t find Cutting Edge to be scary at all. Instead, it felt like we were stuck in the world’s longest conga line during a power outage.

Cutting Edge relies on many oversized props for their big “scares.” We saw giant snake heads, giant rat heads, giant lizard heads, and so on. At first, these props were cool, but after about the fifth time of seeing them, they lost their novelty. It’s never a good idea to buy haunt props in bulk. Also, the music in this haunt was disjointed and didn’t have anything to do with the scenes. We heard Marilyn Manson, Depeche Mode, and even Macklemore’s “Thrift Shop” as we passed through the sets.

Most of the actors were nondescript, and and their main “scare” seemed to be sticking their hands in front of you as you pass by. This type of scare is not very effective, and maybe the loud music made it pointless for the actors to bother making any kind of noise because most of them were silent. We think Cutting Edge could have benefited from attending the seminar at HauntCon called “Designing an Actor-Friendly Haunt.” Most of the scenes were not set up well for scares, and even though the actors were trying, we just didn’t hear many screams coming from the guests.

About halfway through the maze, we came across an additional queue. A live band was playing as guests filed by, which is pretty unique and a good way to break up the “conga line” inside the maze. The queue led into a Saw-themed mini-maze in which every guest was given a glow stick and told that once inside the maze, they’d have a few minutes in complete darkness to look for the only door out. It was complete chaos inside as people ran around in all directions looking for the one correct “exit” while encountering a lot of dead ends. But it certainly wasn’t completely dark, as 100 glow sticks (plus people turning on their cell phones to help them see) actually created a lot of light. This mini-maze was more annoying than scary or even fun, and it had no actors, just more loud music. After a few minutes, the lights came on, and if you hadn’t find the correct “exit,” you were now allowed to go through any door you wanted.

Finally, we should mention the water. There is a lot of water in this maze and you will get wet. There were probably some kind of signs warning us about this ahead of time, but we missed them and were taken by surprise. At one point, we were forced to walk underneath a waterfall. Other rooms had dripping or spraying elements, and the end of the maze takes you through a room of foam up to your waist. We recommend wearing old clothes and shoes you don’t mind being damp for a few days afterward. The water elements at Cutting Edge are not something we’ve encountered in any haunt we’ve been to before, but they really didn’t add any scare factor. 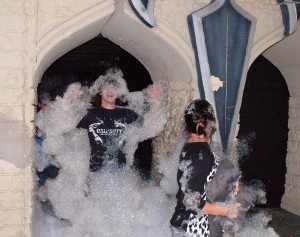 Cutting Edge’s website advertises that it will take about 55 minutes to get through the attraction, and we found this to be pretty accurate. However, we were pretty bored after about 20 minutes. This was the first time we ever wished a haunt were shorter. It’s disappointing that a maze of this size couldn’t be more imaginative or scary. Although Cutting Edge is probably the most famous haunted house in the Dallas/Fort Worth area, we experienced much better attractions during our time in Texas. Although Cutting Edge may be the longest, you’ll get better and more scares for your money at other haunts such as Parker House, Reindeer Manor, and Hangman’s House of Horrors.