First Rob Zombie shocked HHN Hollywood with his widely popular House of a 1,000 Corpses mazes. Then Alice Cooper welcomed us to his nightmare  and took us on a trip to hell. Now it’s Ozzy, Tony, and Geezer’s turn to rock us with their all-new maze Black Sabbath: 13 3D.

It was promised that today’s maze would be a surprise and in some respects it is and others it isn’t. We couldn’t guess the Black Sabbath would be used for a haunt theme but as soon as we heard the announcement it made perfect sense as HHN Hollywood has featured a ‘rocker” based maze for the past 3 years, so now it feels commonplace to have one on the roster. What we’re most excited about this maze is the promise of new 3D effects that will incorporate Scareactor triggered 3D videos into the maze design. From the early descriptions it almost sounds like the haunt version of the effects found in Transformers: The Ride. This could be the creation of a new haunt industry effects trend and we’re hoping it’s as cool as it sounds. It should also be noted that is an exclusive maze for HHN Hollywood.

Another HHN Hollywood maze will be announced this weekend at ScareLA, taking place in Los Angeles. If you can’t wait for more HHN maze excitement then be sure to join us and John Murdy there! 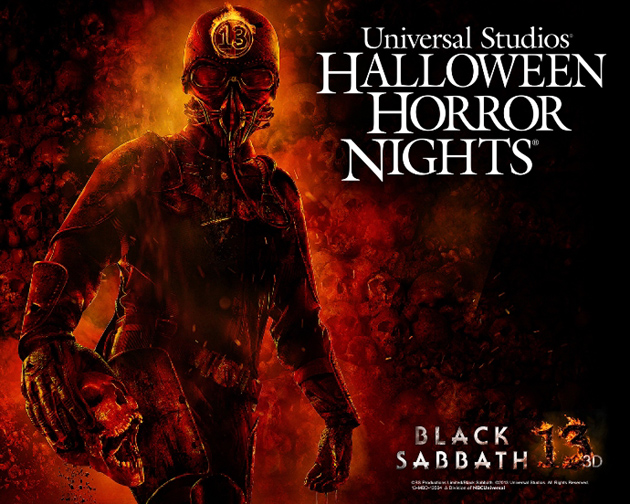 Is it us or does the image art remind you of the 2009  My Bloody Valentine Maze? Here’s the official press release from universal.

The new maze, based on the darkest lyrics from Black Sabbath’s biggest hit songs and the only attraction at the horror event to incorporate 3D video, will also include scenes inspired by the legendary band’s recently released Billboard #1 album, “13.”  A nightmarish landscape of doom will engulf guests as they enter “Black Sabbath: 13 3D” and traverse through horrifying graveyards, disturbing madhouses and bone-chilling battlefields.

“We were all really excited when Universal Studios Hollywood approached us about doing a 3D ‘Halloween Horror Nights’ maze based on our music,” said Black Sabbath’s Ozzy Osbourne.  “I’ve seen the drawings of what it will look like when it’s finished and it looks amazing.  I can’t wait to walk through it on opening night in September.”

Guests will come face to face with a heart-stopping Lucifer and his bride, blood-soaked dead bodies and bubbling pools of “radioactive water” while song’s inspired by “Luke’s Wall,” “Iron Man,” “Paranoid,” “War Pigs,” “Electric Funeral” and – of course – “Black Sabbath” violently penetrate the confines of the maze at high volume.