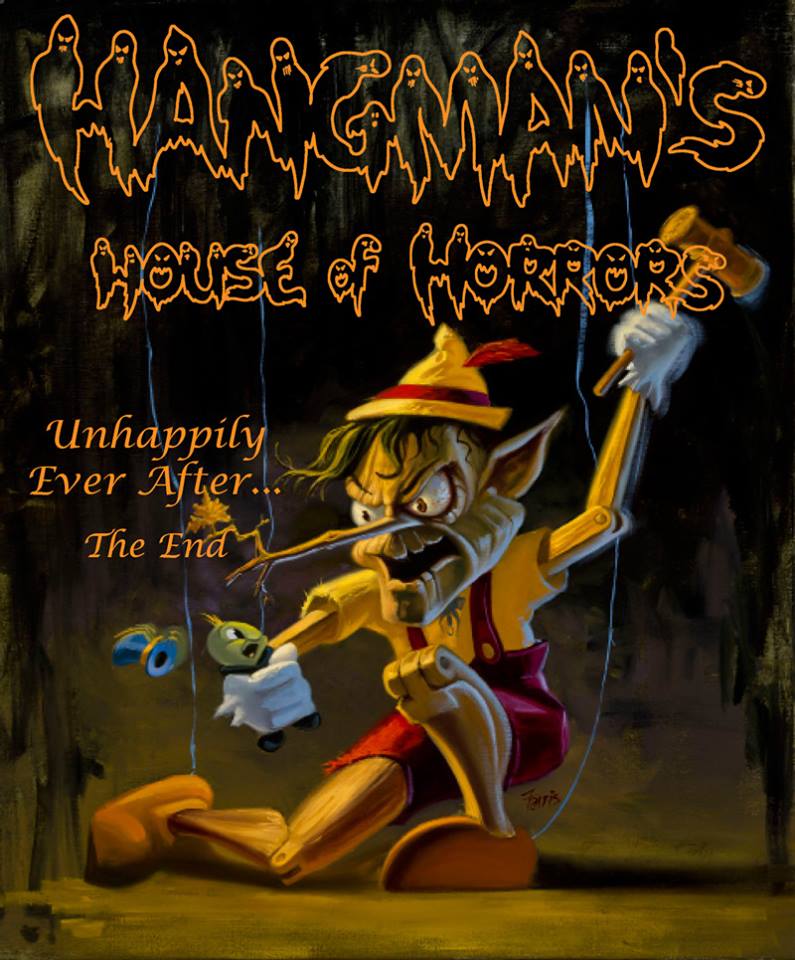 This year will mark the 25th and (sadly) final season of Hangman’s House of Horrors.

Hangman’s House of Horrors is one of the premier haunts in Texas and one of the top charity-benefiting haunted houses in the nation! To date, they’ve terrorized over half a million victims and donated more than $1.8 million to local charities! For much of its history, proceeds went to the Multiple Sclerosis Society of Tarrant County. In 2005, it expanded to include other charities such as the American Cancer Society, Rocky Top Therapy Center, SafeHaven of Tarrant County, Cenikor Foundation and A Wish With Wings. To accomplish this enormous feat Hangman’s has enlisted more than 1,000 volunteers each year — from the actors to ticket-takers and concession workers to security personnel.

During the HauntCon Tour we were able to experience this venerable haunt in both a ‘lights on’ tour and in full ‘show’ mode. From our REVIEW it earned a solid overall rating of 3.5 Skulls from us with higher ratings for their Haunt Design and Fright Value.

For their final act their theme will be “Unhappily Ever After…The End”, A creepy and dark retelling of the classic fairy tales! This returns to one of the most popular themes in Hangman’s history: “Scary Tales”. Hangman’s is an enormous haunt and will take a minimum of 25 minutes (at a running in terror pace) to get through. It includes a mix of  scareactors and animatronics within a wide array of rooms featuring elements like uneven floors, spinning tunnels, swinging bridges, claustrophobic hallways, and even a “find your way our” maze. Just about every traditional haunt element and character you can think of can be found inside this House of Horrors.

Unhappily Ever After will feature riffs on Pinocchio, Jack and the Beanstalk, The Wizard of Oz, Hansel and Gretel and other classic tales. And of course perennial favorites, such as the black-and-white checkered room, the scary clowns and the spinning tunnel, will remain. So will the 3-D Wonderland attraction and the Labyrinth maze. The attraction previously inhabited by scary hillbillies in “McDagenville” will change to an on-trend zombie theme of “outbreak.”

It’s disappointing that a long standing haunt institution, like Hangman’s is calling it quits. However, in the world of horror, the term “Final Season” doesn’t necessariraly mean the absolute end and maybe after opening on Friday the 13th, Hangman’s will find a way to  have “A New Beginning”.