Halloween in Texas is a Scary Good Time ! And as we get closer to that time of year again we’ll soon start to feel the cool breeze in the air, the eerie clouds above the city and the beautiful autumn leaves flowing in the wind. Who are we kidding? In Texas, itʼs 90 degrees in October with maybe a few days of a brisk cool night if weʼre lucky. Nonetheless, Dallas is a thriving Mecca for Halloween. Everything from theater productions, themed orchestra performances, pumpkin patches, pumpkin carving contests, harvest festivals, costume contests, organized trick or treating and haunted houses. 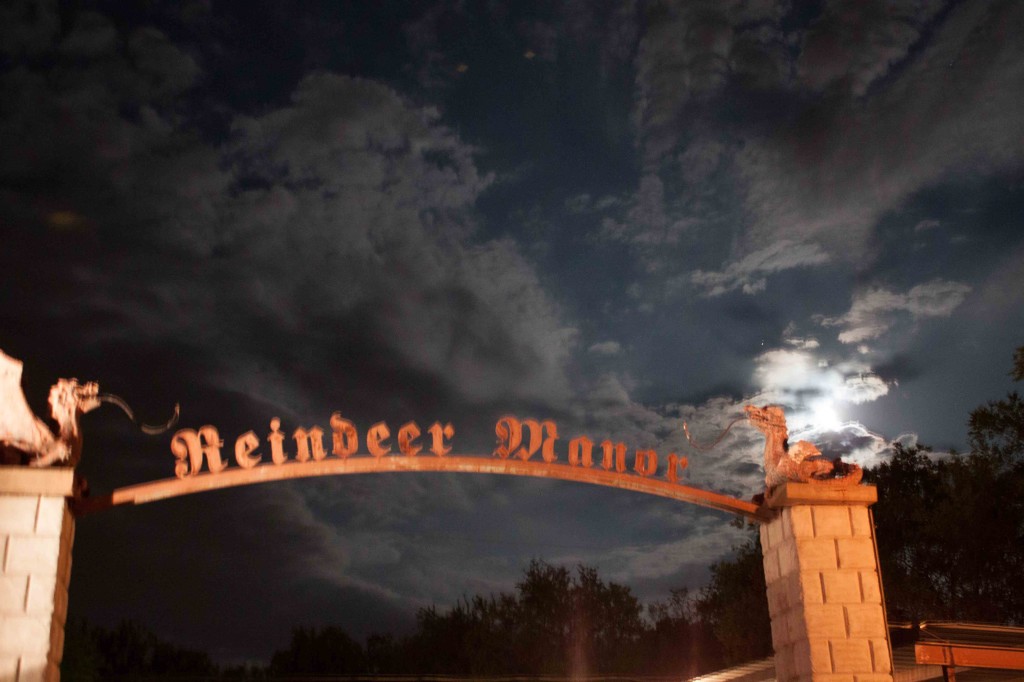 After attending HauntCon earlier this year we can honestly say that Dallas is one of the largest haunted house markets in the entire country, and now with Halloween being the second largest celebrated time of the year, itʼs no wonder why people travel the distances they do to visit the many haunted attractions Dallas provides. One such place is Reindeer Manor Abusement Park. Reindeer Manor is one of the few attractions in Dallas with a true haunted past. So much that in the off season they host a number of paranormal tours for the many ghost hunting groups in Texas. Is it haunted? Well, you’ll have to visit and find out for yourself.

Nestled in the back country of a small Texas town named Red Oak. Now in itʼs 40th Season, itʼs a property rich in atmosphere and with no shortage of fear. Your journey to Reindeer Manor begins with a long creepy, winding trek down a quarter mile dirt road surrounded by trees, reminiscent of something out of Texas Chainsaw Massacre. You park your car and are promptly loaded into a tractor pulling hayride that takes you far, far away from the safety of your vehicle. Through the dimly lit trees and cool air, your ride soon emerges into Texasʼ very own dose of fall with a trip around the complex revealing a sneak peak at each of the three attractions taunting you of the fear to come. 13th Street Morgue, Dungeon Of Doom and Reindeer Manor Haunted Houses provide a full night of entertainment while immersing you into the historical and well documented haunted past of this very spooky place. 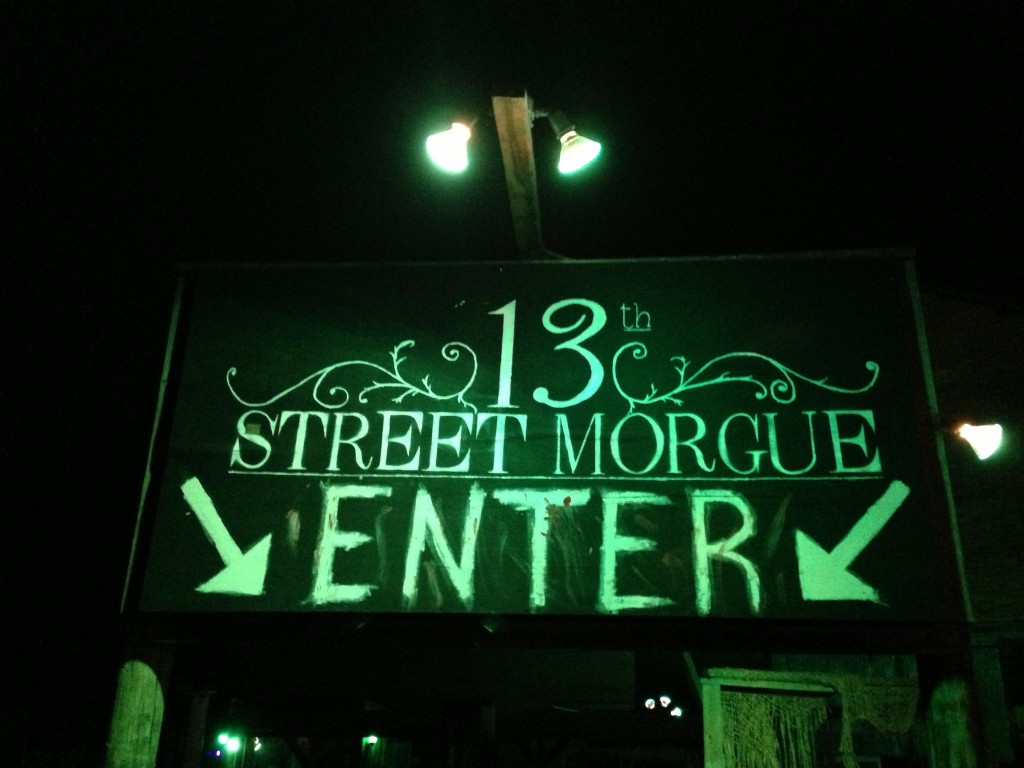 Of the three attractions at Reindeer Manor Abusement Park, 13TH Street Morgue was our favorite. It was non-stop scary with a consistent theming throughout it’s indoor, outdoor, upstairs and downstairs settings.  The details inside are incredibly realistic with cobwebs everywhere and aged prop pieces. Even small details, like the wall paintings, window dressings,  meticulously placed furniture and  knick-knacks make the place believably haunted.

This is also one of the few haunted house attractions that knows how produce unique and believably threatening scares. The scareactors were top-notch with a mix of serious character actors and acrobatic performers who all go out of their way to scare you to death. Their timing is perfect and they all stay in character.  The haunt also employs special effects but only subtly so no to become distractions from the authentically creepy atmospheres.

We have to say that if you’re in the Dallas, Texas area during Haunt Season. You need to make the trip out to experience this haunted attraction. It is the epitome of the Haunted House experience. 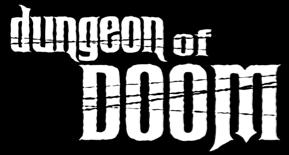 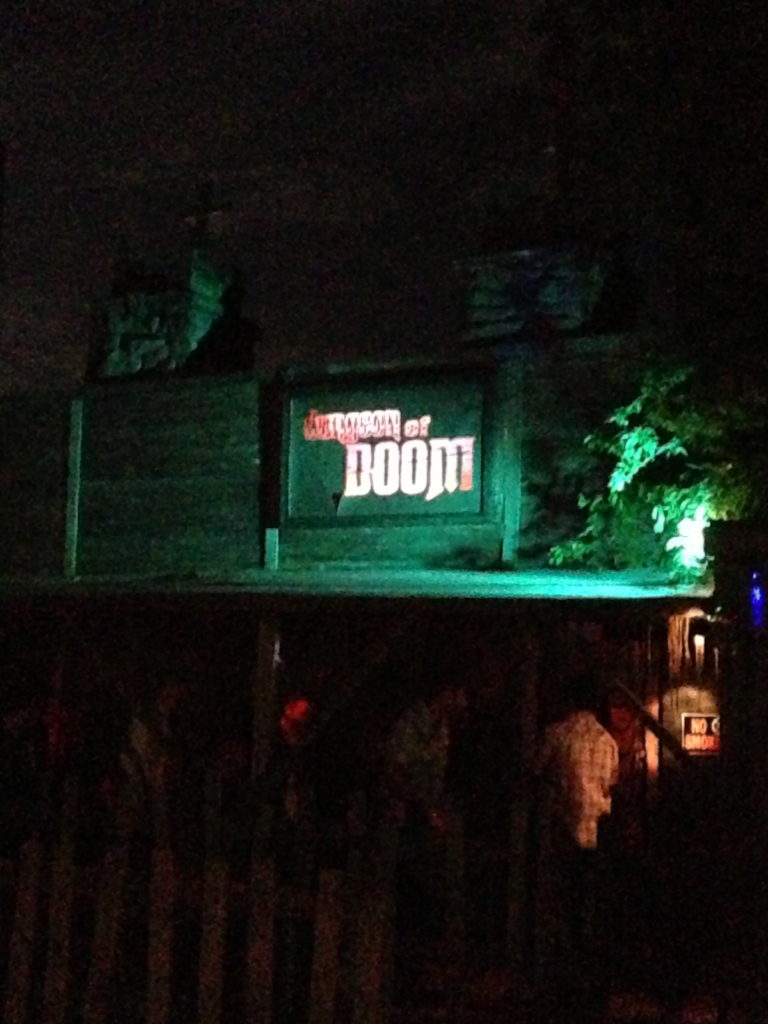 Dungeon of Doom is slightly shorter (but still long compare to standard haunts) and and less elaborate than 13th Street Morgue. This haunted house has more sporadic scenes with less consistent theming. It seemed to have everything that would “cause your doom” featured inside. This maze had more generic scenery  and scare tactics but it still kept the scare factor at an intense level and is a strong compliment to the 13th Street Morgue.
There were some nice effects such as a passage way with strobe lights that gave the illusion of  moving walls. There was also an odd effect with a spinning  platform that is hard to navigate, especially when a ghoul begins to chase you. They also used air guns, a jackhammer, and of course a chainsaw in some of the mazes most startling scenes. The big scares could mainly be attributed to the very eager scareactors “popping out” versus any kind suspense which we encountered inside the 13th Street Mourge. Inside the dungeon we had monsters sneaking up behind us, banging on walls, screaming at us, taunting us, and even touching us. Some of the performers took their acts to levels past PG-13 (which we don’t mind) but it could make other Haunt Stalkers feel sheepish.

Holiday in the Dark, Sunday October 27th. Experience all three haunted attractions in complete darkness with only one glow stick to light your way. Three Attractions, One Glow Stick, Total Darkness. Open 7pm-10pm