It’s Thrills by Day, Fright by Night at Six Flags Magic Mountain’s 21st Fright Fest. Magic Mountain will be transformed into a Halloween playground, weekends October 4 – 27. Upon entering guest will greeted by Demon’s Door, the new Front Gate scare zone with 30ft flames coming out from the Valencia Falls! Also, keep an eye out for cobwebs and spiders winding through the trees, tombstones popping up in grassy areas, park signage spattered with blood, and skeleton bones and skulls scattered throughout. This year they’re promising that you’ll have “a ghoulish good time with hair-raising shows, electrifying street entertainment and thrilling mazes”. Plus, you can experience all their coasters rides “in the dark”.

Over the years Fright Fest has struggled to make the cut in the heavily saturated Southern California theme park Haunt landscape. With Knott’s and Universal pushing boundaries of terror every year, Magic Mountain’s haunt has always felt amateurish in comparison. At one point they even tried branding themselves as the haunt for “boo-ginners” but that claim also placed them in a lower tier when compared to Disneyland’s “Not So Scary Halloween Party”. Nonetheless, it seems Fright Fest isn’t ready to bury the skull yet and it looks as if they’re trying to get more serious about their haunting.

In recent years they’ve strived to make significant upgrades to their haunts and for the 21st season they’re putting together one of  their “biggest and scariest Fright Fest events ever” with 3 new mazes, a new show, and a new sc-area. There also won’t be hiding places, anywhere, from the park’s monsters and maniacs. You’ll have to watch your back as you wander through the park’s macabre scare zones, where you may encounter evil demons, bloody zombies, creepy clowns, devilish monsters, and other disturbing characters. In addition, the park will stay open later, until 1am, on weekends in October. So, you can visit the park in the day and then experience the frights at night. However, mazes require an additional fee.

This year  maze themes descriptions do sound more elaborate  and they are calling it the ‘Best Fright Fest Ever’ with the hash-tag #BFFE  (being used for all Six Flags Fright Fest around the country).  But the question still remains as to how scary are they really. For any of our Haunt Stalkers who go, please let us know. On a side note, we are kind of bummed to hear that Jokesters Hideout 3D has been retired. The ‘Jack in the Box’ Scare was always pretty epic. 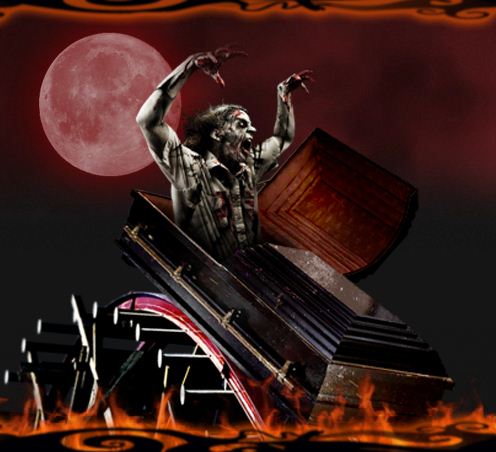 *New for 2013* Weepy Hills INSANEtorium (DC Univerese)  – Just when you thought it was safe to leave your loved ones in a safe, bright and cheerful residence for them to regain their mental health … things aren’t always what they seem. Some try their hardest to get out…. but it always was too late. How about you?  Will you escape?

*New for 2013* Toyz of Terror (Palace Arcade) – The Jokester’s Hideout has been revamped. This defunct toy factory is now haunted by a chilling turn of events that took place when the admired inventor went pysychotic, adding demented spirits to his beloved toys, leaving them possessed.

*New for 2013* Total Darkness (Magic Moments Theater) – Unexpectedly, the lights of the historic theater have darkened on the anniversary of the demise of the longest-running show. The spirits are awakened to haunt tourists who try to catch a glimpse of the ghosts who inhabit the decaying concert hall. Now your mind must find your way around with no light to guide you. Scream if you must and hold on to those you think you can trust.

Wiloughby’s Resurrected (Under the Sky Tower) – The longest running maze at Fright Fest (we’ve lost track of how many years) continues it’s legacy of frights in this revamped version.  Eerie twists await you at the Granddaddy of all mazes….there’s hair raising terror around each nightmarish turn and dreadful screams down the long twisting hallways

The Aftermath (Movie District) – Enter a post apocalyptic city where nomad warriors rule with bone-crushing iron fists and the dead stalk the living. Can you survive one of the largest mazes in SoCal?

Black Widow (Under the Sky Tower)  – When Linda Willoughby was bit by a black widow spider the infection led to her heart and left her lying dead in the dark basement shadows. Unknown to Linda, eggs had been laid in her fresh wound and shortly after her death, hundreds of blood-thirsty black widows crawled out of the decomposed body and began to hide out in the darkness, waiting to attack those who linger too close. Get tangled in a web of terror as you struggle to survive the Black Widow’s nest.

Cursed (Tidal Wave) – Magic Mountain sits on the site of a formerly thriving gypsy village. Dare to enter this supposed cursed land where, inexplicably, the moon is always full. Gypsies and werewolves are said to roam the land at night in an eternal search of new blood.

*New for 2013* Demon’s Door – The new Front Gate scare zone with 30ft flames coming out from the Valencia Falls. Once you enter, be prepared for your mind and body to be completely taken over by the evil spirits that await you

*New for 2013* Zombie Xing – Beware of the undead who will try to steal your bodies as they make their way from one haunting field to another.

Gypsy Hollow– A horrible battle between the nomadic gypsies and the local townspeople has continued for years. Visit the one area in the park where there’s always a full moon and werewolves are rumored to hunt for blood.

Exile Hill –  The dead have risen and now are looking for new souls to take on this hill.

City Under Siege –   The insane and unruly run rampant in the streets. Prepare to feel really uncomfortable with these comic-like characters running amuck.

The Wastelands–Barbarian humanoids rule this land and dare you to enter The Aftermath.

Nightmares: A Twisted Fantasy– This evil nightmare has never been so edgy as your favorite bedtime stories take on a new and twisted tale.

*New for 2013* VooDoo Nights – Honor the memories of all our beloved souls with spirited DJs, rockin’ go-go dancers, and a light display guaranteed to add a bit of delight to your fright.

Hypnotist – Joe the Magician spent night after night entertaining guests with his tricks and illusions. He makes objects disappear, reappear, cut in half, and float in the air. He often selects volunteers from the audience to show how real the tricks are. 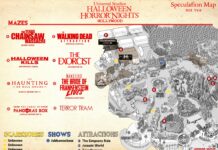