Last year we had the opportunity to experience one the most unique Halloween attractions we’ve seen in our 21 years of Haunt Stalking at The Blumhouse of Horrors. The Blumhouse production team smartly incorporated theater and movie quality special effects into a one-of-a-kind, scary haunted house filled with magic and atmosphere. This year the Blumhouse team has returned with a brand-new, immersive horror theatre experience based on Blumhouse’s own movie The Purge.

The first reviews from the opening weekend of THE PURGE: FEAR THE NIGHT were not good, at all. Yelp, Twitter, and Facebook were filled with scathing reviews complaining of it not being worth the price of admission. However, being the consumute scarers they are, the Blumhouse team quickly pressed pause on the production to revamp the format. They made the effort to ratchet up the scares and fine tune the experience to ensure the audience is satisfied. For this we applaud them as there are many haunted attractions out there who only wish to make a quick buck and fool themselves to believe that they can get rich with a low quality attraction.

Due to the changes they wanted to make we could no longer go on the night we had planned to visit,  so we ended up going much later in the season. Nonetheless, we finally made it and we’re glad we did. Upon arriving we went inside the lobby of the Variety Arts Building which was staged as a screening area for us, the “delegates”. After being screened we waited in a brief line to enter the annual convention of the New Founding Fathers, the dystopian governing party of a near-future America, in which all crime is legal once a year for 12 hours. This is the same premise used for the The Purge movie. 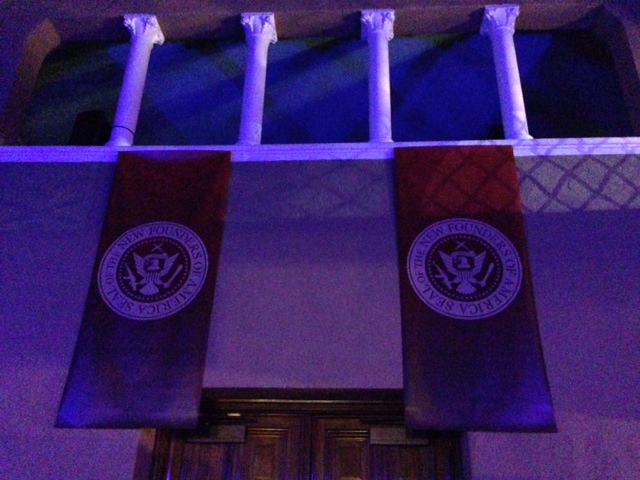 Before we’re able to get inside the main convention hall, there’s a final screening process that each delegate has to go through alone. After making it through the screening process, which has a couple shocking and cheap scares, all the delegates are reunited in the main convention in the presence of the President and first family of New America. The actors were rather convincing in making us feel as if we really were at an official political event with all of the grandeur and political cheesiness. We are then asked to go backstage for a special interview and then quickly discover that not all Americans believe in the Purge, and that the intense opposition can have frightening, even deadly, consequences.

From here the pace picks up with a hectic and at times intesne experience were we’re in the role of hostages who’ve been taken by hostile dissenters. In the previous version delegates had to find their own way through the many levels of the building in order to escape their captures and uncover the mysterious lives of elected officials. In the new version we experienced, we were herded as a group through the New Founding Fathers Headquarters. We still were required to interact with the characters, perform tasks, and subjected to some verbal abuse, but it was all carefully choreographed. There also were a few “monster around the corner’ type scares as we ventured though the rooms and hallways of the Headquarters.

Overall, we prefer last year’s Blumhouse of Horror’s, which did a better job at showcasing scenes of horror and scaring us. We honestly think that one of the other Blumhouse film properties such as Sinister or another original storyline would have made a better Halloween show. The content of the The Purge movie itself evokes more feelings an action thriller vs. full fledged horror movie. We had two or three good scares this year, although for us, we enjoyed it much more for design and theming. The Purge: Fear the Night is packed with rooms and passageways that are incredibly themed and detailed with an abundance of lighting and sound effects that really punch up the experience to create a fully immersive environment. The actors are really good as well with most seeming like seasoned performers. We even suspect some of them were moles inside of our group.

While the The Purge: Fear the Night experience was unquestionably intense we didn’t find it to be terrifying, in the spirit of a Halloween haunt. If you’re a big fan of the The Purge or looking for a new type of immersive and theatrical thrill experience, then we recommend that you go check it out. With two years of successful haunting in downtown L.A., we now can’t wait for the Blumhouse team to return to really terrify us next year.

Overall Rating of The Purge: Fear The Night: 3.5 Skulls