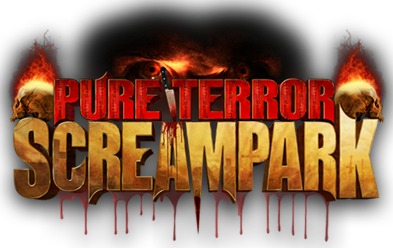 Pure Terror Screampark, located in Monroe, New York, bills itself as the “Scariest Haunted House in New York,” but like most haunts given to such hyperbole, it falls vastly short of this claim.

We visited Pure Terror on a Saturday night in the middle of October, when haunt season was in full swing, and the lines were very long. The person manning the ticket booth told us the lines were about 2 hours long, and since our time on the East Coast was limited and we had other haunts to visit that night, we opted for the “Speed Pass” so we could get to the front of the lines. And we were very happy we did so, because these attractions are not worth waiting that long for.

This year, Pure Terror moved to “Museum Village,” which is located in a park-like setting containing 19th-century buildings and historical artifacts. It was a cool setting for a haunt, and we were excited when we first stepped onto the grounds. There were a few vendors selling trinkets and things, and the haunted houses are located near the back of the property, their facades (and long lines) mostly hidden from view until after you pay for your ticket.

All three attractions in the Screampark were billed as “all new” for 2013, and the lines are daisy chained. They do let only small groups in at a time, which is a good practice, but the mazes are very small, so that is really their only option.

The Crypt – Our brand new attraction will send you traveling underground with the un-dead into a labyrinth of tight, terrifying passage ways.  Your heart will race as you continue deeper into this dark, putrid hell where the restless souls await you.

Although the props and scenery were sparse and simple in this haunt, this was actually our favorite attraction of the night. Low-hanging, hay-like netting hung from the ceiling, forcing us to crouch in certain areas. The scareactors wore the same kind of netted suits, which helped them blend in with the walls and hide them from view. They got us with a few good scares in here. Naked female torsos also hung from the ceiling, and a couple of actors creeped us out by twisting the nipples on these props as we walked by. We’re not prudes, but this kind of lewd behavior isn’t exactly scary, but more eye-rolling,  and we hope they didn’t do this sort of thing to the younger guests.

Phobia – Another all new attraction where the stench of death is surrounding you before you even enter this macabre den of demise.  Be forewarned, this structure is crawling with creature’s everywhere with no chance of escaping. Phobia will exploit all of your senses and make your worst fears a reality.

If you have a phobia of urine-scented dark passages, then this maze will terrify you! We don’t know what the hell was going on in this maze, but it smelled worse than a port-a-potty on skid row. We guess this was the “stench of death” promised in the maze description. This was stronger than any of the manufactured “haunt scents” we’ve experienced at high-level attractions. It smelled like the real deal. The halls were dark, the floor was just dirt, and there was a lot of black plastic, making the maze feel more like a home haunt than a professional attraction. There were some generic-type props hanging around as well as generic scenes of clowns, etc. The actors were doing their best to scare us, but the set up here just wasn’t conducive to scares. There was nothing particularly memorable about this maze (aside from the smell, that is), and the extreme darkness had us running into the group in front of us several times, which increased the annoyance factor, not the scare factor.

All New for 2013:  The House of Terror – Bigger & Scarier than ever before; guaranteed to have you on your hands and knees.

This is the most themed maze at the Screampark, and as the name probably implies, it’s an old-fashioned haunted mansion–type of theme, with the addition of some actors in vampire attire. The first few rooms are well done, with somewhat elaborate sets re-creating the interior of a Victorian-era home that has fallen into spooky disrepair. But the floors in this maze are again just dirt, which really distracts from the feeling of being in an actual house. We know that building plywood floors is probably a huge expense, and maybe there’s something about the historic “Museum Village” that prevents this construction, but fully enclosing the haunt from floor to ceiling would go a long way in elevating the experience. Nevertheless, they did a good job with what they had. The hallways were tight, and there were a few good distractions that the actors used to their full benefit for scaring us. We enjoyed this maze until we came to a part we had to crawl through. The actors direct you into crawling inside a fireplace, which is clever at first, but once inside, it’s pitch black, which left us bumping into the group in front of us while on our hands and knees, Human Centipede style.

Overall, we were disappointed with our visit to Pure Terror Screampark. Particularly perplexing is the fact that HauntWorld.com called this haunt “one of the scariest screamparks.” We certainly cannot endorse such a high rating. One thing that does give us hope, though, is the fact that as we were leaving the grounds, one of the scareactors asked us how we liked it and seemed genuinely concerned when we told him about our experience.  The fact that they care about guests’ experiences shows that they are trying to make a good haunt and it’s probably not just a money grab. So we hope to hear that Pure Terror improves its attractions next year, and we think they have a good basis on which to build something worth visiting. But for now, we can’t recommend it.